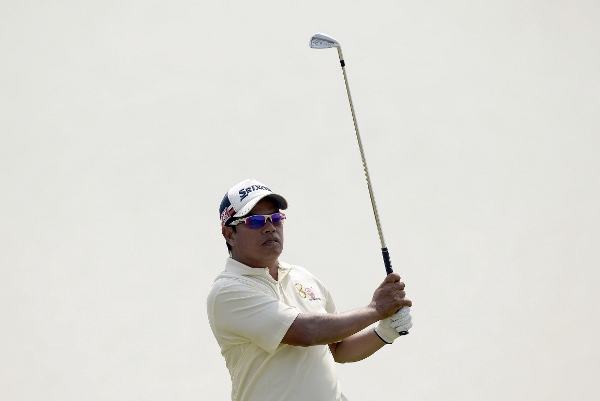 THAI veteran star Prayad Marksaeng hopes to start the new Asian Tour season with a victory at the SAIL-SBI Open which begins today.

The 47-year-old ended his 2013 campaign on a stylish note when he secured a popular home triumph at the King’s Cup Golf Hua Hin last month, which was also his eighth career victory on the region’s premier Tour.

After his King’s Cup success, Prayad claimed another tournament win in Thailand which makes the smooth-swinging Thai one of the favourites to dethrone India’s Anirban Lahiri at the SAIL-SBI Open, which is celebrating its seventh edition.

“It’s good I can play the SAIL-SBI Open this year as it’s the first tournament on the Asian Tour. After winning the King’s Cup, I won again at the Winter Tour Korean Tournament in Thailand. I have made some good adjustments with my new Srixon clubs and I’m ready for this week,” he added.

While Prayad acknowledges the threat from the strength of the field this week, the Thai reckons the ultra-demanding Delhi Golf Club will pose his biggest challenge.

“It’s not very often now I get to play at Delhi Golf Club. It’s a big challenge and it is not really suited with my strength as I will not be able to use the driver much,” said Prayad.

“The long irons will be very important and I think we’ll need to get used to the firm greens. I will adjust my game to fit the golf course.”

After turning 48 last month, Prayad is proving he can still compete at the highest level. He also won the Queen’s Cup on the Asian Tour last season to finish seventh on the Order of Merit. He also became only the sixth player to surpass US$3 million in career earnings with his outstanding 2013 campaign.

He has set himself a goal to return into the world’s top-100 this season, which will see him splitting his time once again between the Asian Tour and Japan Golf Tour.

“The Asian Tour is my home tour still and I will play in Japan too. My aim this year is to get back into the top-100 in the world and that would mean winning a couple of events in Asia and Japan,” said Prayad, who was ranked once in the world’s top-50 and is currently 131st.