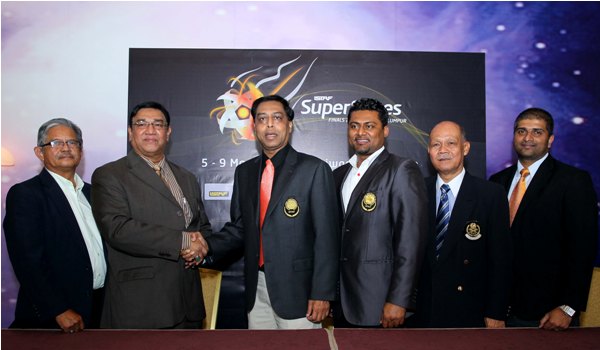 MALAYSIA look all set to breeze into the quarterfinals of the ISTAF SuperSeries FINALS 2013/14 after being drawn in Group B of the tournament alongside Singapore and tournament first-timers France.

The national team, who have made it to all three finals of the elite, international tournament’s preliminary legs but have yet to be crowned champions, is seeded joint first alongside defending champions Thailand in the SuperSeries FINALS, to be contested March 5 – 9 at the Titiwangsa Indoor Stadium here.

“We may seem to have an easy route on paper, but we have learnt to never underestimate any team, even if it’s their first time in this tournament,” said national coach Jamaluddin Hassan at the tournament draw here today. “As hosts, we will go all out to qualify for the final and do our very best to win this time around.”

He added that he has yet to finalise his team for the tournament, but that it would not include striker and captain Norshahruddin Mad Ghani, who is out injured.

Thailand has been drawn with India and Germany in Group A. Group C has fourth seeds Indonesia, Korea and the USA while Group D has third seeds Japan, Brunei, China and Iran.

In the women’s category, joint third seeds Malaysia have been drawn in Group C with Japan and India. Top seeds and defending champions Thailand, who has won all three preliminary ISTAF SuperSeries 2013/14 legs, are drawn with Indonesia and China while Group B has second seeds Vietnam, Myanmar and third joint seeds Korea.

The tournament, which is the culmination of the ISTAF SuperSeries 2013/14 season and determines the overall men’s and women’s champions, will for the first time ever feature 13 of the world’s top men’s team and nine of the best women’s teams.