It was all down to the wire in the final men’s single before Puchong United BC was able to pick up their first win in the Resorts World Genting Purple League 2015 when they edged Petaling BC  by the closest of 11-10 margins here this evening at the Sports Arena @ Sentosa.

“It was as close as it could get. The final game of the men’s singles certainly put everyone at the edge of their seat,” said Puchong United team manager Irina Imoetseva afterwards.

“The win was very narrow but it was a win nonetheless and that was very important start for us.”

Trailing by 6-2 going into the mixed doubles, the Indonesian pair of Ardiansyah and Devi Tika turning out for Petaling BC were certainly not deterred even though they were up against the more experienced Christinna Pedersen partnering Wong Fai Yin.

And Christinna (with Joachim Fischer Nielsen) – who had won the Indonesia Super Series Premier and also the India Super Series last year – showed plenty of grit before losing the game 3-2.

“The game was very hard and it was very close all the way to the finish. But we had very good communications between us which in the end, paved the way for our win today,” said Ardiansyah after the 52-minute battle.

The win for Petaling BC allowed them to pull up to just within a point away as Puchong United hold sway at 7-5 going into the men’s double.

Boosted with confidence and trailing 8-5, Petaling then had Goh V Shem-Shia Chun Kang taking to court where they took on Lee Jae Jin-Yew Hong Kheng.

But Tanongsak made sure of the victory for Puchong United with the close 3-2 win in the second men’s singles for their first win of the new season. 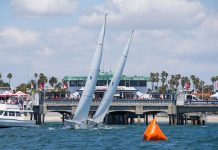