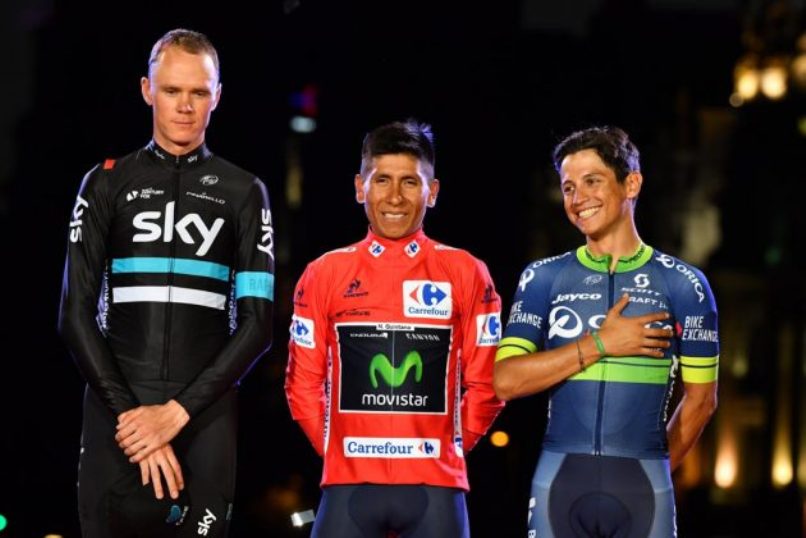 After five Grand Tours and much Tour de France heartache, Nairo Quintana finally looked down on Chris Froome from the top of the podium in Madrid Sunday having claimed his first Vuelta a Espana.

Quintana’s win was his second Grand Tour title following the Giro d’Italia in 2014, but his ultimate dream of becoming the first South American to win the Tour de France has been denied by Froome.

Three times Quintana has made the podium of La Grande Boucle, in the three years when Froome has kept the yellow jersey to himself in 2013, 2015 and 2016.

“It is a dream I have that continues in my mind and I hope one day will come true,” said Quintana of his Tour de France ambitions.

For now he has the satisfaction of finally getting one over on Froome and the confidence that will bring for a fascinating showdown between the two at the Tour in 2017.

“It signifies the growth of Nairo Quintana and the ability to compete with the best riders in the world,” added the Colombian.

Froome’s respect was also won as Quintana got the better of their personal duel in a gruelling three-week slog that included 10 summit finishes in searing Spanish summer heat.

The Brit sportingly applauded as Quintana crossed the line on the penultimate stage two seconds ahead of him on Saturday to extend his overall advantage to 1min 23sec.

“He is the greatest rival there is at the moment,” continued Quintana. “He made me suffer at the Tour and here I have won.”

Froome will be stronger come the Tour next year, not least because he will have a far better Sky team around him than the one that accompanied him in Spain.

Quintana’s decisive early attack on stage 15 left Froome isolated without a single teammate for company for most of the day in which he lost 2min 37secs.

Yet, Quintana’s rising star, backed by one of the few teams that can compete with Sky when it comes to resources in Movistar, could be hard to stop.

Formed in the Colombian Andes, Quintana’s penchant for the mountains was developed by cycling 16 kilometres a day to and from school and to help sell fruit and vegetables in local villages to keep his family afloat.

His determination has been hardened by that difficult upbringing and even near disaster.

Quintana suffered from a mysterious childhood illness and at 15 he was in a coma for five days after being hit by a taxi in a training incident.

However, his father, Luis, spotted his potential at a young age, stretching the family funds to buy a racing bike for his young protege.

“I was in a coma in the hospital for five days. I was very lucky to survive,” he told Cycling Weekly in 2014.

“Thinking about the past helps me to realise how hard everybody worked in my home so I can be where I am now.”

His Giro and Vuelta wins mean Quintana can become just the seventh rider in history to win all three Grand Tours if he succeeds in his Tour de France dream.

“Nairo, despite his airs and graces and apparent calm, is a unique predator,” said Movistar team director Eusebio Unzue.

“He has a scary winning mentality. When he sets a goal he doesn’t doubt or stop.”

A victory passage down the Champs-Elysees in July remains the goal for Quintana to write his legend into cycling history. – Agence France-Presse