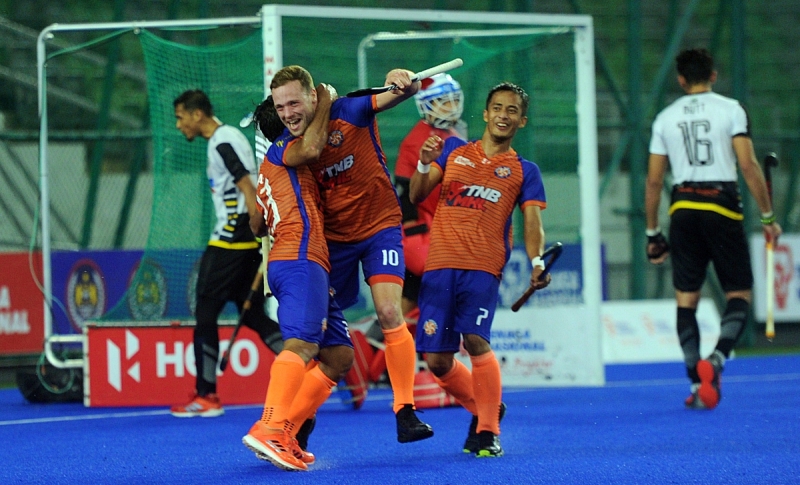 Universiti Kuala Lumpur (UniKL) made a spectacular start to their 2020 TNBMHL Premier League season with a 3-2 victory over Terengganu Hockey Team (THT) in the curtain raiser Charity Shield at the National Hockey Stadium in Bukit Jalil tonight.

This is the first time UniKL won the Charity Shield after falling behind last season. However, despite the setback, UniKL went on to clinch the 2019 Premier League title and runner-up in the TNB Cup.

THT won the 2019 Charity Shield with a 3-1 victory over UniKL in penalty shootout after a 2-2 draw in regulation time at the Batu Buruk Hockey Stadium in Kuala Terengganu.

UniKL drew first blood in the 19th minute when drag-flick specialist Muhammad Razie Abdul Rahim converted a penalty corner with a powerful push to the right of goalkeeper Hafizuddin Othman.

But THT progressed in the 26th minute with a quick counterattack through their most prolific forward Faizal Saari, who weaved his way past three defenders, and unleased a powerful shot to the right of national goalkeeper Adrian Andy Albert to earn the equaliser.

Faizal came back to knock on UniKL doors with a second goal in the 36th minute to put the 2019 TNB Cup champions ahead for the first time. But 2019 Premier League champions UniKL responded swiftly with a second penalty of the match and Razie made no mistake in the conversion as the score stood 2-2 as it approached the third quarter break.

The fourth quarter was launched on a high note. Both teams were equally dominant until Dutch international Roel Bovendeert increased the lead in the 50th minute with a reverse stick shot. The ball struck goalkeeper Hafizuddin’s foot and deflected into the top of the net.

UniKL will play Hockademy Kuala Lumpur on Sunday. Hockademy went down 4-1 against Maybank in an earlier match today.