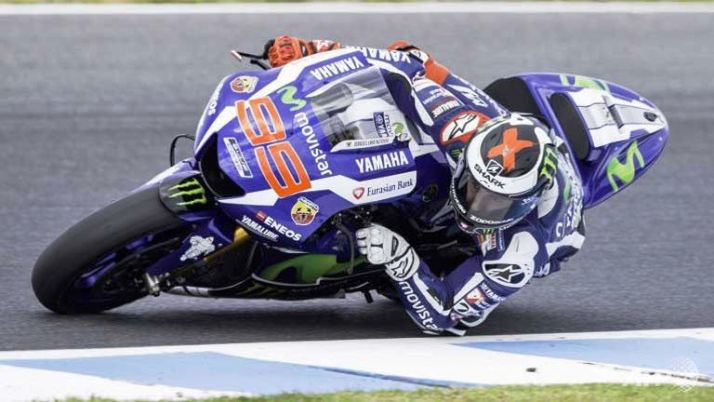 World MotoGP champion Jorge Lorenzo will start from pole for Sunday’s San Marino Grand Prix after posting the quickest time in a record qualifying lap at the Misano circuit on Saturday.

The Yamaha star is joined on the front row by his teammate and local hero Valentino Rossi, and Suzuki’s British GP winner Maverick Vinales.

Lorenzo is placed third in the riders’ championship, 64 points behind his fellow Spaniard Marc Marquez, who was fourth quickest in qualifying to start on the second row.

The world champion in 2013 and 2014 has for company on the second row Italian duo Michele Pirro and Andrea Dovizioso.

Pirro was standing in for Andrea Ioannone after the Ducati man suffered a fractured vertebrae in practice on Friday.

Lorenzo’s record-setting lap time of 1min 31.868 has given him a major chance of registering his fourth win at the circuit renamed in honour of the late Italian rider Marco Simoncelli.

Lorenzo, notching up the 64th pole of his career but his first since May, was victorious from 2011 to 2013 and earned a top-three spot on every occasion prior to crashing out of last year’s race.

“That was the best lap of my career,” beamed Mallorca-born Lorenzo.

“When I saw the time I couldn’t believe it!”

But Rossi, born less than one hour’s drive away in Urbino, will be hot on his heels in his bid to delight the local partisan crowd and reduce his 50 point deficit on Marquez in the standings.

Rossi had produced a great lap on his second attempt to go second in the times, only for race organisers to cancel it as he had gone off the circuit.

But he returned with one shot left to ensure second on the grid on the Rivieri di Rimini.

“It was important to make the front row,” said the crowd favourite, “because the track’s narrow and difficult to overtake”.