Home 2021 Redding bounces back with slick gamble to take Race 2 victory at... 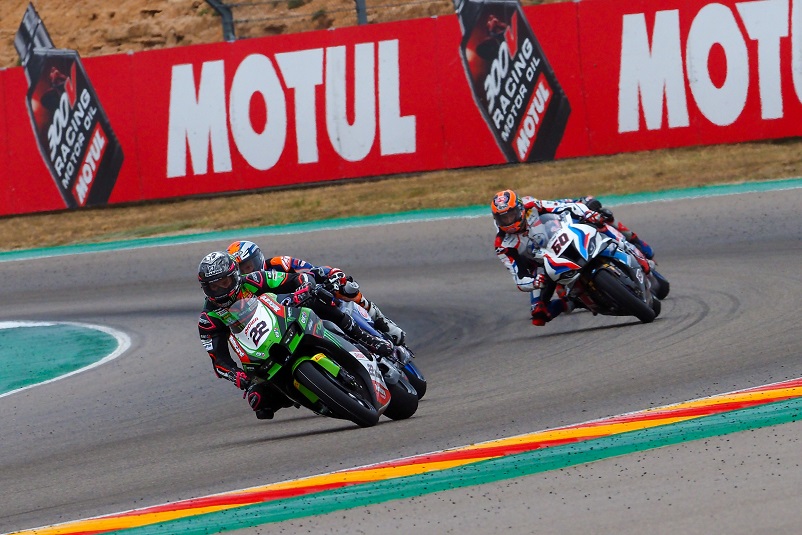 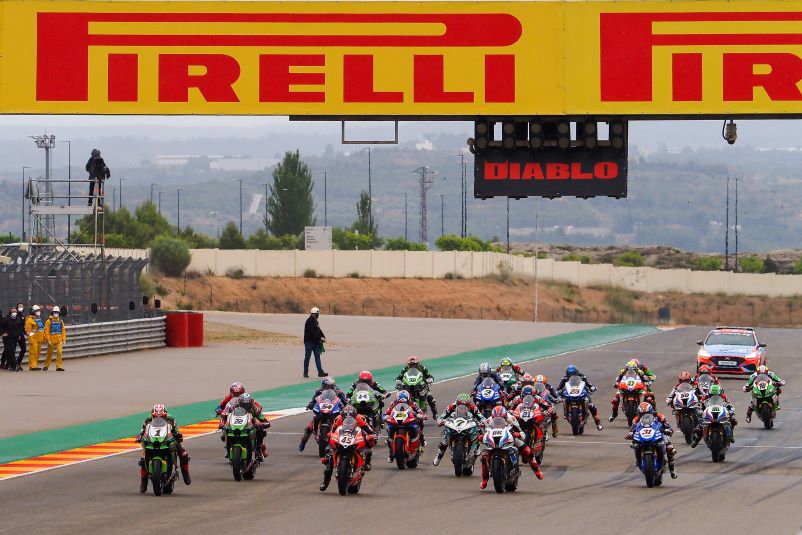 The drama continued in the final MOTUL FIM Superbike World Championship race of the Pirelli Aragon Round after a tyre gamble by Scott Redding (Aruba.It Racing – Ducati) meant he responded to earlier disappointment to claim a sensational victory in Race 2 at MotorLand Aragon, coming home almost ten seconds clear of his rivals.

An earlier rain shower meant the track was wet but drying throughout the day and, although there was a drying line appearing, most riders decided to race with the immediate tyres. As the track dried further, Redding was able to make his slick tyres work to move into the front and he did not look back, while Jonathan Rea (Kawasaki Racing Team WorldSBK) came home in second ahead of teammate Alex Lowes.

The intermediate runners started off the race in the strongest position with six-time World Champion Rea (and teammate Lowes with American star Garrett Gerloff (GRT Yamaha WorldSBK Team). Gerloff was able to make the move on Lowes for second place.

He soon had his eyes on Rea but it ended with Gerloff coming off his bike and Rea taking a trip through the gravel at Turn 14; an incident that cost both riders places and was placed under investigation by the FIM WorldSBK stewards, and Gerloff given a Long Lap Penalty; the first rider in WorldSBK to be given such a penalty.

The incident allowed Lowes, Toprak Razgatlioglu (Pata Yamaha with BRIXX WorldSBK) and Michael van der Mark (BMW Motorrad WorldSBK Team) to jump ahead of Rea, with Razgatlioglu challenging Lowes for the lead of the race before van der Mark got by his former teammate to give the BMW M 1000 RR its first lap in the lead.

While the intermediate runners had the advantage in the early stages of the races, the track soon came into favour for the slick-shod bikes, with Redding passing Razgatlioglu for the lead and soon pulling out a large gap to the chasing pack to take his first win of the 2021 season.

While Redding extended his lead out in front, the battle for second was hotting up between van der Mark, Rea, Lowes, Razgatlioglu and Tom Sykes (BMW Motorrad WorldSBK Team), who managed his intermediate tyres to latch onto the battle for second place. Rea had briefly got ahead of van der Mark at the final corner, but the Dutchman was able to fight back, although Rea was able to make the same move work on Lap 10 until Turn 1 on the next lap, with van der Mark fighting back.

Sykes was able to pass Razgatlioglu on Lap 12 of 18 to move into fifth place as BMW searched for a strong result on their first weekend with the new BMW M 1000 RR, although the move cost both riders time. On Lap 13, Rea was able to make a move on van der Mark and make it stick to secure second place, before Lowes followed through a couple of laps later. Van der Mark tried to fight back but found himself sandwiched between teammate Sykes, who was on the kerbs at Turn 1, and Lowes on the inside, with van der Mark eventually falling down to fifth behind Lowes in third and Sykes fourth; the first time two BMWs have finished in the top five since 2013.

Drama was never far away in this race and that continued throughout the top ten with a three-way battle for sixth place between Razgatlioglu, Folger and Gerloff; the Turkish star just about holding on from Gerloff and Folger, who started on slick tyres. Andrea Locatelli (Pata Yamaha with BRIXX WorldSBK) was ninth with Lucas Mahias (Kawasaki Puccetti Racing) securing his first top-ten finish.

Alvaro Bautista (Team HRC) came home in 11th place ahead of a trio of rookies as Kohta Nozane (GRT Yamaha WorldSBK Team) secured another points finish in his maiden WorldSBK weekend, Isaac Viñales (Orelac Racing VerdNatura) in 13th and Axel Bassani (Motocorsa Racing) in 14th on an impressive weekend for the youngest rider on the grid. Christophe Ponsson (Alstare Yamaha) was the final points position with 15th, finishing ahead of Rinaldi.

Eugene Laverty (RC Squadra Corse) was the only BMW rider outside the top ten, finish just clear of Leandro Mercado (MIE Racing Honda Team) who was 18th. Chaz Davies (Team GoEleven) was the first to fall victim to the difficult conditions as he came off his Ducati Panigale V4 R at Turn, forcing the Welshman to retire from Race 2 on the opening lap of the race. Leon Haslam’s (Team HRC) race came to an end on Lap 5 after he came off his Honda at Turn 2, with the British rider retiring from the race. Tito Rabat (Barni Racing Team) was another retirement after he crashed at Turn 1. Davies was able to finish the race in 19th despite the crash, ahead of TPR Team Pedercini Racing duo Loris Cresson and Samuele Cavalieri.

“It was weird, it kind of feels like I haven’t raced because I was on my own. But it was a gamble. I took a gamble this morning, I didn’t know whether to go for the intermediate and I was debating. It was the same situation again on the grid, and I remember Sachsenring a few years ago in MotoGP™, the intermediate cost me a podium. I remember saying ‘I won’t use an intermediate in race conditions again, put the slicks on and I’ll take the chance’. It was a bit sketchy actually, the cojo*** as they call it here, in the beginning. You have to take a gamble sometimes. I lost out this morning, went the wrong way. I lost out at Brands Hatch in 2019, I went with intermediates, it cost me. I finally took a gamble and it paid off for a win. I’m happy for that but it was a really tough and strange weekend.”

“I’m just so happy to finish, to be honest! Early in the race, he came through and I thought, the line wasn’t big there, it was quite narrow and then he crashed, but my instincts told me to open the gas and try to get away from the bike. Then there was deep, deep gravel. I fully motocrossed it, putting weight on the rear, going through the gravel. I thought I best let at least two guys past so I didn’t gain an advantage, for sure, because it was faster to straight line the chicane. I did what I could with the intermediate, huge kudos to Pirelli because that tyre stayed together. We were doing 52s at the end and that was fast, the thing’s moving around but the bike was working really well today. Of course, the right decision was slicks so fair play to Scott for that.”

“Happy with that. To be honest, I nearly went full dry as well on the grid but the track was so wet but from the sighting lap to the warm up lap it changed completely. I went for the intermediate, it was the safest choice for me. To be honest, after three or four laps, I was struggling especially with the front. It was just getting too hot. I had a little bit of a battle with Michael and Toprak but I was just destroying the tyre trying to dive up the inside and brake really late. I thought I couldn’t get any further than this group, so tried to be smart and smooth, lift the bike up, and at the end of the race I played a little bit with the mapping to change the power of the bike and the last four or five laps I found a pretty good setting that was hooking up really well, I still had some grip and I was catching Jonny back a little bit. It’s been a tough weekend in terms of managing the conditions but for the first one, to be back racing, back on the grid, I’m really happy about that and really looking forward to Estoril next week.”

Championship Standings (after Race 2, Round 1)