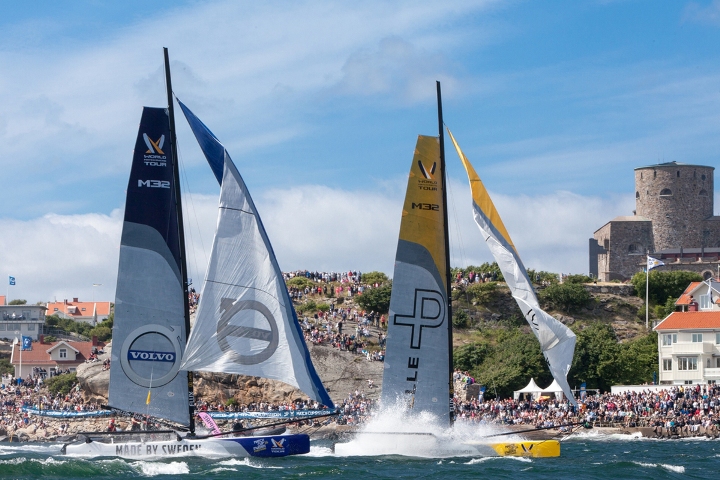 The 29-year-old and his Robertson Racing crew also banked US $33,000 for winning in Marstrand, Sweden, plus a World Champion’s bonus of $1,000,000. It’s the largest prize money ever awarded in the sport of sailing, but Robertson’s whoops of joy and celebration were more about winning the title of Match Racing World Champion. “It’s a dream come true and the goal we’ve been striving for since 2009,” he told the crowd that he just done his best to drench with champagne. “ To do it here in Marstrand, I couldn’t think of a better place. Thank you all for watching, I hope it was entertaining because we sure had fun.”

There were so many twists and turns to the Final. Robertson was fast out of the blocks in the gusty wind which was bulleting through the fjord at up to 25 knots, with a nasty lumpy chop making it very difficult to maintain the speed on the light, 500kg M32 catamarans through the tacks. Canfield was handicapped by losing his tactician and mainsheet man, Chris Main, who took himself off the boat this morning due to a long-term shoulder injury flaring up. “It wouldn’t have been fair of me to go out there and hold the boys back,” said Main, close to tears at missing his shot at defending the title he won last year with Ian Williams.

With reigning World Champion Williams knocked out in the Quarter Finals, Canfield was able to bring in GAC Pindar crewman Garth Ellingham as Main’s stand-in. Able replacement though Ellingham was, getting the coordination and teamwork right on the M32 at this level requires split-second timing and telepathy between the crew, and US One looked vulnerable on the upwind manoeuvres.

However, Canfield seemed to have the measure of Robertson in the second match and they were neck and neck, on collision course at the top of the course with Canfield on the inside at the left turn mark. As Canfield tacked, Robertson tried to sneak inside him but misjudged the turn with disastrous consequences. Crash, crunch, and a hole in the US One float. “We’re taking on water!” yelled Canfield, as the umpires slapped a penalty on Robertson. “Mayday! Mayday! We’re sinking!” Canfield and Robertson sure know how to ham it up and turn on the drama for the live TV coverage, but the drama had to go on pause while a spare boat was prepared for US One.

An extra penalty point against Robertson now put the scores to 1-0 in favour of Canfield. Match point to US One, and for a while it looked like the American team were going to take out the next match and win the title. But somehow Robertson found his way past Canfield at the top of the final upwind leg and charged down to the finish, punching the air in defiance. 1-1, and all down to the final match.

We had already seen a number of big nosedives and near capsizes, but even with so much at stake the teams were never going to hold back. Robertson observed to the cameras between races: “If you wanna win it, you’ve got to lick your stamp and SEND IT!”

Both teams threw everything at the final start and the first downwind charge to the bottom of the course. They were neck and neck going up the next upwind leg, as both crews wrestled their M32s through the tacks. Towards the top of the track for the last time the two boats converged on collision course and came to blows again, though this time only a glancing one. The umpires slapped a penalty on Canfield and Robertson seized the moment, racing away up the course and across the finish line to the roar of the crowd.

The Kiwis had done it. World Champions. Phil Robertson had become the first million dollar man in sailing, backed up by his athletic crew of fellow Kiwis: Stu Dodson, Will Tiller and James Wierzbowski. “We’ve been a super low-budget campaign,” said Robertson. “We’ve paid for everything ourselves this season. So we’re over the moon, just can’t believe it, we’re stoked.”

He paid tribute to Håkan Svensson, who took over ownership of the World Match Racing Tour last year, and whose company Aston Harald builds and promotes the M32 catamaran around the world. “The M32s are just so much fun. We’re having a blast. There have been a few sceptics about whether you can do match racing in multihulls. Well just take a look at that Final. I’ve never had so much fun match racing as in these cats.”

Canfield, even in his moment of defeat, was grinning from ear to ear. “It’s incredible what Håkan has created for us, we’re definitely back next year. Congratulations to Phil and his team in some of the most challenging conditions you could ask for.”

Earlier in the day, Robertson beat Matt Jerwood, Redline Racing from Australia 3-0 in their Semi Final match. Canfield had more of a fight with Chris Steele, 36 Below Racing from New Zealand, who pushed his training partner very hard, but US One scraped through to the Final 2-1. In the Petit Final to determine 3rd and 4th place overall, Jerwood beat Steele 2-0.

The spectacle of the Final drew some of the biggest Saturday crowds Match Cup Sweden has ever seen, with the cliff tops packed with over 30,000 spectators. Svensson was delighted with how his vision for a rejuvenated World Match Racing Tour had worked out. “We’ve had a great first season travelling the world, watching the M32s compete on the Tour for the first time. And today, the spectators, the sailors, the island of Marstrand, have done us proud,” he said. “We have been very lucky with great conditions this week, and the competitors delivered thrills, action and drama beyond my wildest dreams. I can’t wait to do it all again next season.”