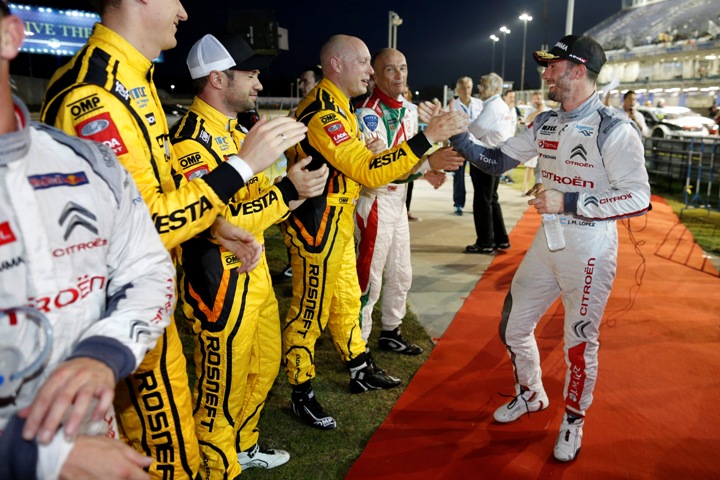 WTCC chance reignited fading fortunes for one of motorsport’s best

His dominance of the TC1 era will leave a lasting legacy

Currently on course for his third FIA World Touring Car Championship title, José María López will transfer his considerable talent to FIA Formula E after signing with the DS Virgin Racing team for season three of the electric racing series.

‘Pechito’ López, who was twice on the brink of a Formula One drive, was a shining light in the Argentinean Súper TC2000 series when WTCC promoter Eurosport Events and the local race promoter concluded an agreement for the Argentine to contest his home round of the World Touring Car Championship in August 2013.

He promptly won the second of two races in Termas de Río Hondo driving a privateer Wiechers-Sport BMW, which was enough to convince Citroën Racing to test and benchmark him against four-time WTCC champion Yvan Muller. He passed the assessment with flying colours and joined Citroën’s factory WTCC team for its maiden campaign in 2014, when the FIA’s TC1 technical regulations were introduced.

While some drivers struggled initially to adapt to the more advanced machinery, López excelled and claimed back-to-back WTCC Drivers’ titles with Citroën, with whom the 33-year-old leads this season’s standings by 101 points heading into the summer break, underlining the WTCC’s ‘catch him if you can’ tagline. He was also instrumental in Citroën’s double WTCC Manufacturers’ championship triumph.

From 63 starts, his WTCC statistics currently read 27 wins, 18 pole positions, 24 fastest laps and 266 laps led. He also holds the record for most victories in one season having won 10 times in both 2014 and 2015. Numbers aside, López won at all five venues added to the 2015 WTCC calendar, including the Nürburgring Nordschleife, where he famously scored a victory double this season. He’s only once failed to make the Qualifying Q3 shootout in 31 attempts and has twice won the new-for-2016 TAG Heuer Best Lap Trophy.

While his obvious natural driving talent, backed up by the might of the factory Citroën team, has been a key factor in his success, his meticulous preparation – including his fastidious use of driving simulators – attention to detail, lengthy technical briefings with this engineers and rigorous fitness regime have ensured that he’s raised the bar considerably.

López’s profile has increased throughout his time as a WTCC driver. He’s become an ambassador of the FIA’s Action for Road Safety campaign, he’s won countless motorsport awards, and has received Argentina’s top sporting accolade, won also by its footballing megastar Lionel Messi.

François Ribeiro, Head of Eurosport Events, said: “Pechito was a prince of touring cars in Argentina when he came to the WTCC and he will leave at the end of 2016 as the king of World Touring Cars.

“It has been an honour to have had a driver of Pechito’s calibre competing in the championship. Since joining the WTCC, he’s raised its level, and forced established stars and teams to significantly raise their game. He became one of the first non-European FIA world champions since Ayrton Senna, and has probably opened the way for the next generation of Argentinean touring car drivers to join the world stage.

“We respect his aspirations to achieve success in a variety of motorsport disciplines. It’s always a great story to see a top driver switching categories at his peak. Clashes of international calendars and marketing obligations don’t make it easy nowadays. Pechito’s background is mainly in single-seaters and we have no doubt he will be at the top of Formula E with DS Virgin.

“Thank you Campeone. See you at Termas de Río Hondo for more home emotions, and the first of 10 great WTCC races before your farewell.”

Eric Boullier, one of López’s former team bosses and now Racing Director of the McLaren Formula One team, said: “I had José María López in my hands between 2003 and 2005 when he was racing at DAMS in Formula Renault 3.5 and GP2. He was already very skilled and totally focused by that time. He made a good move to join WTCC and gave his international career a second chance. It’s no surprise to me he became a multiple FIA world champion, and now he has the aspiration to win in other racing categories.”

Fittingly for López, WTCC 2016 resumes in Argentina from 5-7 August. The season will then visit Japan, China, Thailand and Qatar where it concludes on 25 November.

The WTCC is promoted by Eurosport Events, part of Discovery, which is also a major shareholder of Formula E.