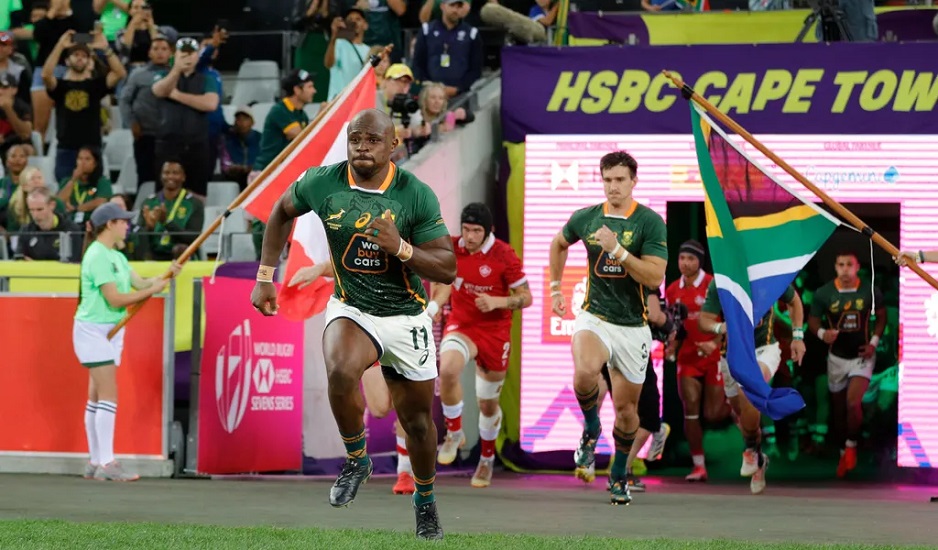 The HSBC Cape Town Sevens will come to a climax on Sunday after a thrilling day of action at Cape Town Stadium on Saturday which saw the semi-final line-up confirmed.

In the women’s event Olympic champions New Zealand will face Ireland in the last four, while the USA will take on reigning Series champions Australia on day three.

In the men’s competition New Zealand and USA will meet in the last four and Samoa will take on hosts South Africa on day three.

In the men’s quarter-finals, Moses Leo led the way with a hat-trick of tries as New Zealand defeated Uruguay 50-0 in the first last eight tie.

Caleb Tangitau scored two tries and Che Clarke and Roderick Solo also crossed for the victors, but Uruguay can hold their heads high for getting this far.

Tuna Tuitama (2), Paul Scanlan and Vaa Apelu Maliko scored tries for Samoa in the second quarter-final as they got the better of Argentina 22-10. Rodrigo Isgro and Agustin Fraga were the try scorers in defeat for Argentina.

An early try from Manueli Maisamoa which was converted by Waisea Nacuqu gave Fiji a 7-0 lead versus USA next up early on.

However, USA found their form in the second period and tries from Joe Schroeder, David Still and Malacchi Esdale – along with one conversion from Steve Tomasin – saw them progress to the semi-finals 17-7.

With the home crowd behind them, South Africa then took on Great Britain in the last match of day two.

Ryan Oosthuizen’s try converted by Ricardo Duarttee gave South Africa a 7-0 advantage before Morgan Williams scored, converted by Tom Emery, made it 7-7 at the break.

Duarttee’s seven pointer early in the second half had South Africa up again before Femi Sofolarin replied in kind and it was 14-14 with a few minutes left.

Dalvon Blood was the man who scored the winning try for the home side, Duarttee converting as they progressed 21-14.

Next up came two much closer matches.

Firstly, Ireland edged past France 12-10. Tries by Amee Leigh Murphy Crowe and Beibhinn Parsons and one conversion by Lucy Mulhall put the Irish 12-0 up, but France came fighting back with unconverted scores from Camille Grassineau and Alycia Chrystiaens.

Ireland held on there and, next up, USA edged past Fiji 10-7.

Australia still have not conceded a point in this event after they swept aside Great Britain 38-0 in the final quarter-final tie.

Earlier on Saturday all four of the men’s pools were extremely competitive with matches two and three being played by all teams on day two.

In Pool A, hosts South Africa had beaten Canada on Friday evening and they backed that up with victories over Fiji and France to be the only team winning all three pool matches.

In Pool B newly promoted Uruguay caused a big shock by defeating last weekend’s beaten finalists Ireland 22-19 and claiming a place in the quarter-finals.

In one of the most hotly contested games of the day, New Zealand recovered from their surprise loss to Spain on Friday to beat Argentina 21-15, a result which saw both teams qualify for the quarter-finals from Pool C.

A late unconverted try from Henry Hutchison gave Australia a thrilling 19-19 draw with USA, but it was not enough for the reigning Series champions as USA as pool leaders, and Great Britain went through to the Cup quarter-finals with Australia finishing third in Pool D.

South Africa and Australia are joint leaders of the men’s Series with 32 points after two rounds, the first of which was won by reigning Series title holders Australia in Hong Kong last month and the second by South Africa in Dubai last weekend. France and Ireland are currently third and fourth on 30 and 29 points respectively.

Australia lead the women’s Series standings after claiming victory at the opening round in Dubai last weekend, followed by New Zealand and the USA in second and third place respectively.

Remaining tickets for the HSBC Cape Town Sevens are available from https://capetown7s.com/tickets/