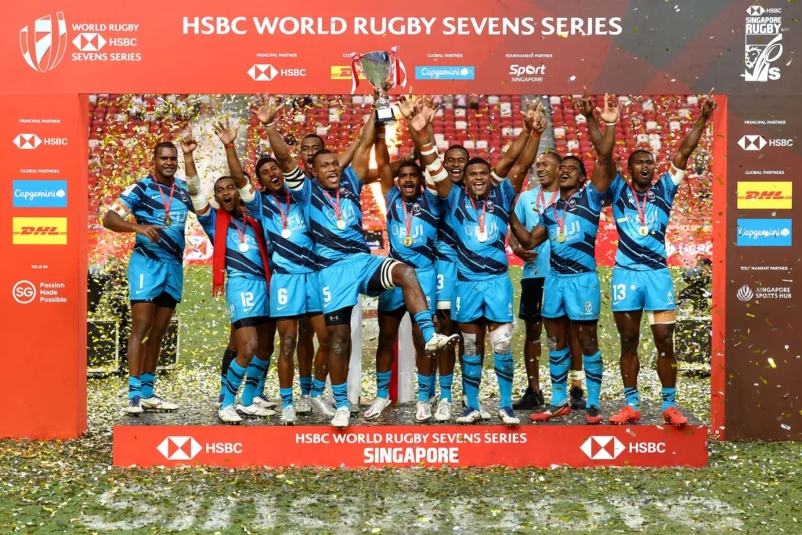 South Africa remain Series leaders with 98 points, ahead of Australia and Argentina tied second on 83 points

All 16 men’s teams move on to Vancouver for the HSBC Canada Sevens on 16-17 April, the women’s Series returns to action in Langford, Canada on 30 April to 1 May

Fiji returned to the HSBC World Rugby Sevens Series in style with a stunning victory in Singapore. The Olympic champions overcame rivals New Zealand 28-17 in a pulsating final to claim their first Series title since Sydney in January 2020.

New Zealand go away with a worthy silver medal from their first outing of the 2022 Series while Australia beat an impressive Ireland 21-19 to clinch a hard fought bronze medal and remain in contention for the 2022 Series title.

Prior to Singapore, South Africa had won all four rounds of the HSBC World Rugby Sevens Series 2022 to date – and six in total in a row – but in Singapore’s National Stadium it was to be Fiji’s day.

Having seen their incredible 36-match unbeaten run ended on Saturday evening by the USA in the pool stage, the Series leaders South Africa lost again on Sunday to Fiji in the Cup quarter-finals and then to Argentina in the fifth place semi-final.

Argentina went on to beat the USA 42-24 in a highly entertaining fifth place play-off.

Fiji’s start to 2022 had not been so strong and they had to miss rounds three and four in Spain, but here they showed they are back in business.

In a repeat of the Tokyo Olympic final, which Fiji won 27-12 last year, matches between Fiji and New Zealand are often classics and today’s final did not disappoint.

Vuiviawa Naduvalo scored his ninth try of the weekend after two minutes to give Fiji the lead in this one with Kaminieli Rasaku converting. Waisea Nacuqu then scored – and converted – Fiji’s second try and they had a healthy 14-0 lead. Just before the break, Joseva Talacolo scored Fiji’s third try, converted by Rasaku, and it got worse for New Zealand as Leroy Carter was yellow carded.

New Zealand needed the first try in the second half to give themselves any hope and a score came from Regan Ware, but it was not converted. With Jerry Tuwai pulling the strings, Fiji’s fourth try came through Naduvalo, his 10th of an amazing two days. Rasaku converted.

A Moses Leo try – converted by Akuila Rokolisoa – and then an unconverted effort from Caleb Tangitau for New Zealand made the final score 28-17.

Fiji captain Tevita Daugunu said:  “It was a very good final. We knew we had to keep the ball away from New Zealand and for most of this final we did just that.

“The team stuck to the game plan perfectly and with it being Palm Sunday back home we hope this has made our family, friends and supporters happy.”

Player of the Final Naduvalo, who scored 10 tries over the course of the weekend said:  “I am so happy, it has taken a lot of sacrifice for me to get this far and that is why I was so emotional during our national anthem. This victory is for my family, they are my ‘why’, they drive me on and I want to make them proud.”

New Zealand captain Sam Dickson said: “We can be proud of our efforts. We had five debutants in this tournament and they all did extremely well and did the black jersey proud so we will take a lot away from it.

“The good thing about the Sevens Series is we have got another tournament next weekend and we will be ready to go again in Vancouver, which is one of our favourite tournaments and we will be looking to repeat our winning performance last time we were there in 2020.”

Despite losing their invincible record in Singapore, South Africa continue to lead the Series standings with 98 points from five of the nine rounds played in the 2022 Series. The Blitzboks are ahead of Australia and Argentina who are tied second on 83 points.

All 16 men’s teams now travel to Vancouver for the sixth round of the HSBC World Rugby Sevens Series 2022 where the world class rugby sevens action will continue at BC Place on 16-17 April.

Ticket information for the HSBC Canada Sevens in Vancouver can be found at https://www.canadasevens.com/tickets-vancouver/

The women’s Series returns to action in Langford, Canada for the fifth and penultimate round of the 2022 Series on 30 April to 1 May.