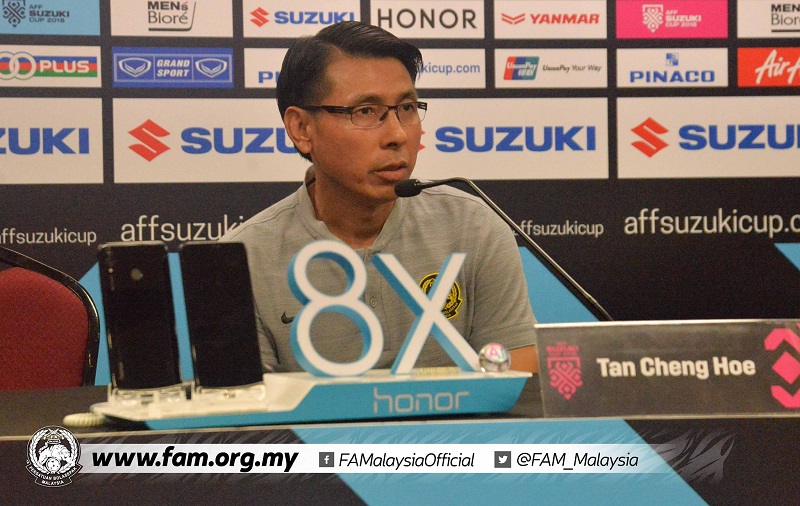 On the eve of their World Cup 2022/Asia Cup 2-23 Group G qualifier at the My Dinh Stadium in Hanoi national football coach Tan Cheng Hoe believes the pressure is on Vietnam to deliver at home.
Cheng Hoe, however, is quick to remind his players to be “fully focused” and be “consistent” in their game and stick to match plans to get the desired results against Vietnam ranked a high 99 compared to Malaysia, ranked 158.
“Forget the past results. Do not be overawed by the home fans and do not be intimidated by Vietnam’s reputation. We have achieved some positive results and let us keep the momentum to get another,” said Cheng Hoe from Hanoi.
Vietnam’s Korean coach Park Hang Seo-, who guided the team to the AFF Suzuki Cup last year, is well aware of the threat Malaysia poses to his Golden Dragons on Thursday.
Incidentally, Vietnam snatched a 3-2 aggregate win over the Malaysian Tigers in the AFF Suzuki Cup final – thanks to a 1-0 win in Hanoi after a 2-2 draw in Kuala Lumpur.
“Malaysia is different now. They are sharper in attack now compared to last year,” said the Korean.
The Golden Dragons are also aware of the Harimau Malaya bite upfront with Sayfiq Ahmad in form plus the wily 33-year-old Norshahrul Idlan Talaha still delivering for the team.
The 24-year-Syafiq, who plays for Malaysian Super League champions Johor Darul Takzim (JDT) and scored a hat-trick in Malaysia’s 6-0 whitewash of Sri Lanka in an international friendly last Saturday. Norshahrul also scored a win in the big win.
Vietnam has brought back Doan Van Hau and Nguyen Cong Phuong. Both ply their football trade in the Dutch. The former play for Heerenveen while the latter plays for Sint-Truidense.
Hang Seo also mentions highly of naturalized Malaysians Matthew Davies, Corbin Ong, and Brendan Gan (all defenders) and midfielder Mohamadou Sumareh.
Rightly, Cheng Hoe, summed it up with this one-liner when he said: “The pressure is more on Vietnam to deliver at home.”
“On the other hand, we too can get a positive result if we are focused and play our brand of football.” – BY RIZAL ABDULLAH