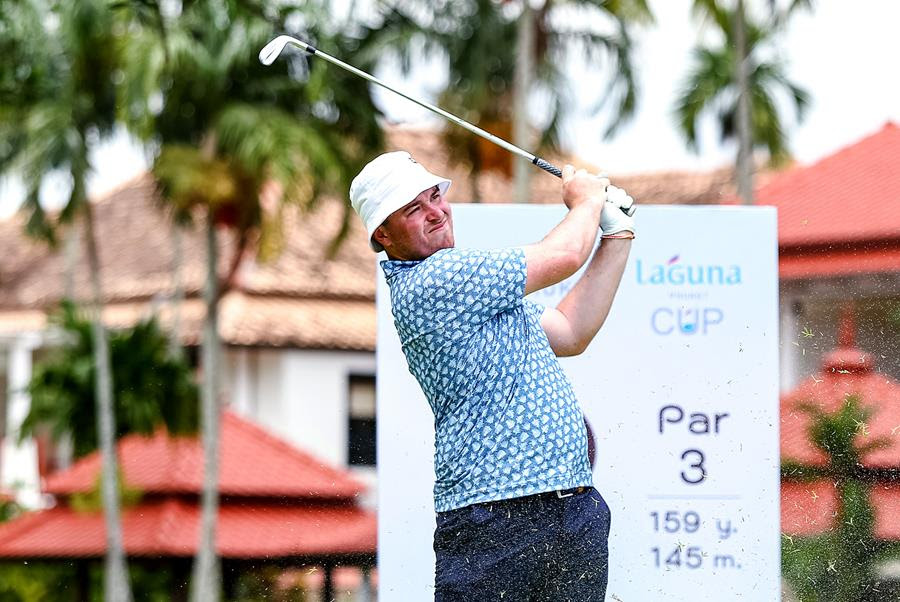 Tom Sloman has never doubted he has the game to compete at the highest level despite a frustrating start to his pro career but concedes he didn’t foresee a potential Asian Tour detour on his pathway to fame and fortune.

That all changed on Thursday when the 25-year-old Englishman ran away with the $75,000 Laguna Phuket Challenge, the first of four Beautiful Thailand Swing (BTS) events jointly co-sanctioned by the Asian Development Tour (ADT) and MENA Tour.

The US$13,125 cheque the former Walker Cupper posed with in photographs afterwards mightn’t force his accountant to undertake a sudden audit but the opportunities now on the horizon courtesy of his five-stroke victory over Thai Poosit Supupramai are potentially life-changing.

Sloman has leapt from seventh to the summit of the MENA Tour’s 2020+ Journey to Jordan Order of Merit (OOM) standings as a result of his brilliant 54-holes at Laguna Golf Phuket and will earn himself an invite to one of the Asian Tour’s new $1.5 million+ International Series events if he can stay there come the completion of the BTS. Two further ADT starts and a free pass to the final stage of Asian Tour Q-School for next season – the reward for those finishing in the top-10 of the final standings – almost now seem a lock too.

It means the big-hitting lad from Taunton might soon be rethinking his loosely plotted path to golf’s loftiest stages.

“My goal is obviously to get to the PGA Tour one day and hopefully win majors. Obviously, that’s a fairly big goal but I believe I have the game for it if all goes well,” said Sloman, who signed for rounds of 63-65-63 and a thoroughly impressive 19-under winning total.

Reminded of the opportunities now presented via the MENA Tour’s strategic partnership with the Asian Tour, Sloman recalibrated his thoughts.

“It’s a massive opportunity now isn’t it with the Saudi’s coming in obviously,” he said.

“Winning the MENA Tour would be fantastic. To get into final stage of Q-School, to get into two more of these [ADT events after the BTS] and the Asian Tour International Series…it’s all about trying to get as many opportunities in there as possible and seeing what happens at the end of year.

“Anything to do with the Asian Tour is obviously pretty big now.”

So too was Sloman’s win, courtesy of 54 holes where he barely faulted.

He started Thursday’s final round with a two-stroke advantage over Supupramai and Jesper Alm and all but played all of his pursers out of contention with five birdies in his first seven holes. There were further gains on 11 and 12 but it was a lengthy par putt that did a near-complete 360 around the cup on the 13th that sealed the deal. There was a minor irritation when he made a three-putt par on the next but another clutch par save when he found tree trouble off the tee on the 17th slammed the door on Supupramai after Alm’s challenge faulted early, a 78 tumbling the Swede down to a share of 39th.

It is Solman’s fourth professional win but comes after his career was stalled by COVID and then by a series of frustrating near-misses on the EuroPro Tour last season. His consolation for seven top-10 finishes, including a pair of joint runner-up placings, was being crowned Rookie-of-the-Year to follow in the footsteps of Tyrrell Hatton, Jordan Smith and Jack Senior.

“I bottled a few tournaments at the back end of last year so to get over the line is a big relief. The close calls on the EuroPro really helped me today, obviously coming down the stretch, I knew what I had to do, didn’t get as nervous I guess. Still nervous all day but I was able to handle it and to get over the line now will hopefully help me in the future as well.”

Supupramai closed with a 66 to finish -14 and is up to third in the Asian Tour OOM courtesy of his runner-up cheque for $8625.

Dodge Kemmer holds onto pole position despite being in Seoul for the latest Asian Tour event after Chanat Sakulpolphaisan was unable to take advantage of the American’s absence. The Thai eventually settled for a share of 9th at Laguna Golf Phuket.

China’s Chen Guxin was the big final day mover, a closing 63 propelling him to a share of third with Thailand’s Pawin Ingkhapradit on -11 – eight strokes adrift of Sloman. Ireland’s Robin Dawson also matched Thursday’s low of 63 to sneak inside the top-10.

After a two day break for rest and range work, the BTS will resume with the Laguna Phuket Cup on Sunday. Like all of the BTS events, it is a 54-hole event with a $75,000 purse.