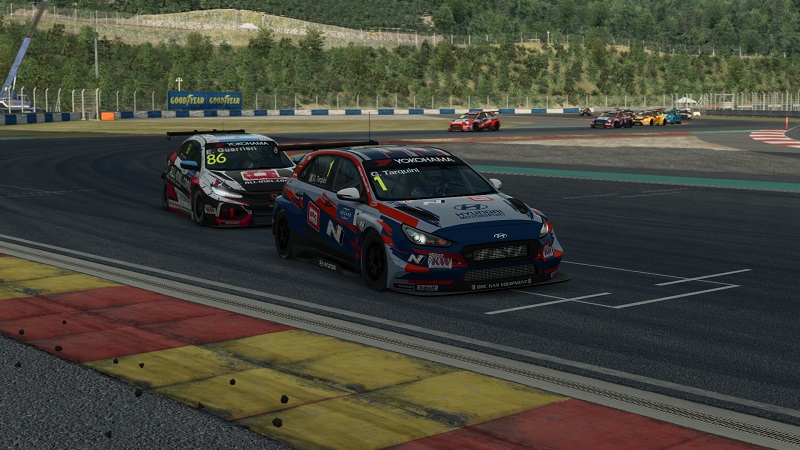 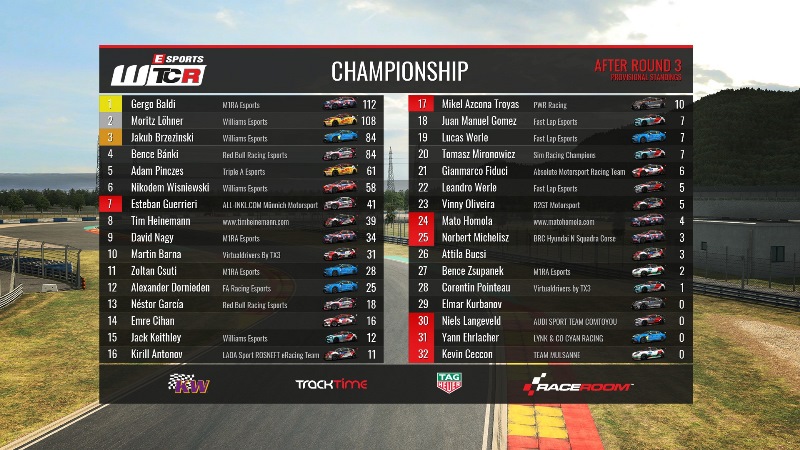 The pre-season Esports WTCR series delivered thrilling action from start to finish as Germany’s Moritz Löhner and Hungarian Gergo Baldi took it turns to “Beat the WTCR drivers” at a virtual Ningbo International Speedpark on Monday night (4 May).

But there was so nearly a win for a real-life WTCR driver with Esteban Guerrieri denied in the closing corners of Race 2 following contact from Baldi. Although it wasn’t the victory he’d fought for, second place was nevertheless the Honda-powered Argentine’s best Esports WTCR result, as Poland’s Nikodem Wisniewski completed the Race 2 podium.

Scheduled to give WTCR drivers the chance to engage with fans while they wait the start of the 2020 WTCR − FIA World Touring Car Cup, the pre-season Esports WTCR series features four tracks plus cars and liveries from Esports WTCR 2019. A prelude to the full Esports WTCR online championship due to begin later this year, the pre-season series from RaceRoom lists TrackTime, TAG Heuer and KW Suspensions as partners with a TAG Heuer watch going to the eventual champion.

The online series between leading simracers and selected real-life WTCR drivers also promotes the FIA’s #RaceAtHome campaign, which encourages all non-essential workers to stay safe at home during the coronavirus pandemic.

Having snatched pole position by 0.025s in the final seconds of qualifying, Löhner took an early lead in his Tom Coronel CUPRA TCR only for Brzezinski − racing as Andy Priaulx in a Lynk & Co 03 TCR − to catch up and pass.

Despite pressure from Bence Bánki, Löhner never let Brzezinski out of his sight, retaking the lead with a thrilling lunge on a left-hander on the final lap.

Brzezinski hit back a few corners later but he carried too much speed into a left-hand hairpin and ran wide on the exit. There was slight contact but Löhner was back into a lead he wouldn’t lose.

Esteban Guerrieri qualified a season-best fifth but slipped to as low as P10 during the race after a mistake under braking sent him sideways and briefly off the track. Spain’s Néstor Garcia finished P10 to claim the reverse-grid pole ahead of the returning Juan Manuel Gomez from Argentina.

Brush from Baldi denies Guerrieri breakthrough Esports WTCR victory
Néstor Garcia led away from pole as Esteban Guerrieri carried too much momentum into the first turn an inadvertently clipped the Spaniard sideways. Garcia recovered brilliantly to keep the lead but in the ensuing melee, Gomez got tagged from behind by Adam Pinczes as he avoided a slightly delayed Guerrieri.

Kuba Brzezinski was then hit from behind by Bánki at the hairpin before the opening lap was done with the hapless Brzezinski in turn nudging Pinczes wide on the exit of the turn.

Armed with plentiful track knowledge from racing for real at Ningbo, Guerrieri set off in his pursuit of Garcia. But having failed to make one move stick, Guerrieri eventually got ahead with an inspired move at the hairpin with just under 15 minutes left on the clock. However, their battle had allowed Baldi to close up and the Hungarian capitalised on an error by Garcia (Red Bull Racing Esports) exiting Turn 1 on the next lap to take second place.

The stage was set for a thrilling final 12 minutes as Guerrieri belied his lack of online racing experience to keep Baldi at bay in Gabriele Tarquini’s Hyundai i30 N TCR. Lap after lap, Guerrieri’s wider entry line into Turn 1 helped to keep Baldi behind only for Baldi, last year’s Esports WTCR online champion, to find a way through at the hairpin with five minutes left to run.

But Guerrieri wasn’t done and he pulled off the ultimate slingshot move on the next lap, dummying to the right before slicing to the left to retake the lead at the hairpin in his ALL-INKL.COM-liveried Honda Civic Type R TCR.

Baldi kept up the pressure and a better exit out of the final turn on the penultimate lap forced Guerrieri to take a tighter line for Turn 1. That allowed Baldi to draw alongside only for Guerrieri to hold him off until the final hairpin. Although Guerrieri had the corner covered, contact from Baldi was enough to nudge the Honda off-line. Baldi was through with only a few corners remaining.

“It was a very exciting race and I enjoyed it a lot, very on the limit,” Guerrieri said afterwards. “I had a good pace and had a nice fight with Baldi for P1. In the end he just pushed me from the back and sent me wide and I think that’s probably not legal.”

Löhner slashes Baldi’s title advantage to four points with Sepang finale remaining
Gergo Baldi might have won for a third time in Esports WTCR Beat the Drivers but Moritiz Löhner is just four points back with the deciding Sepang races left. Kuba Brzezinski has demoted Bence Bánki for third. Follow for the full standings: http://game.raceroom.com/championships/48#standings