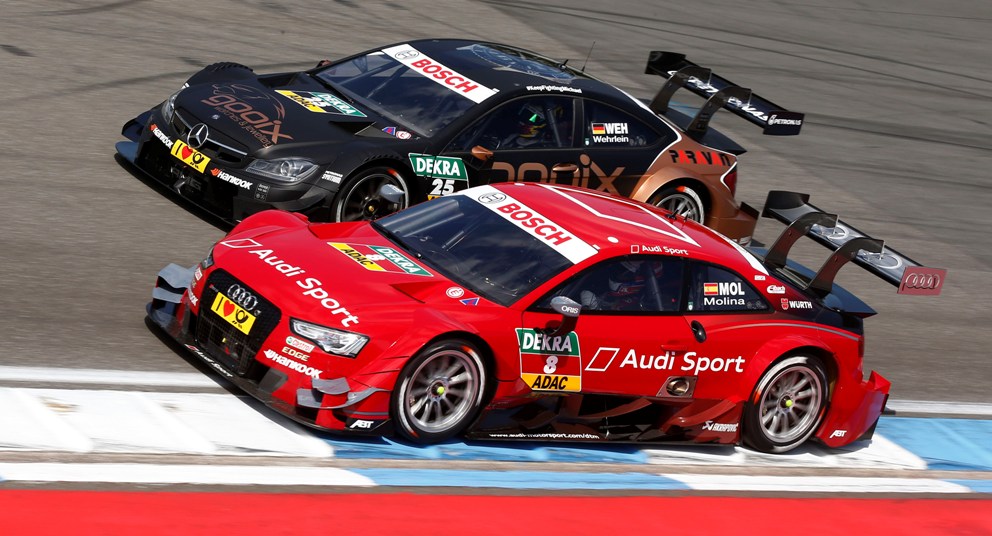 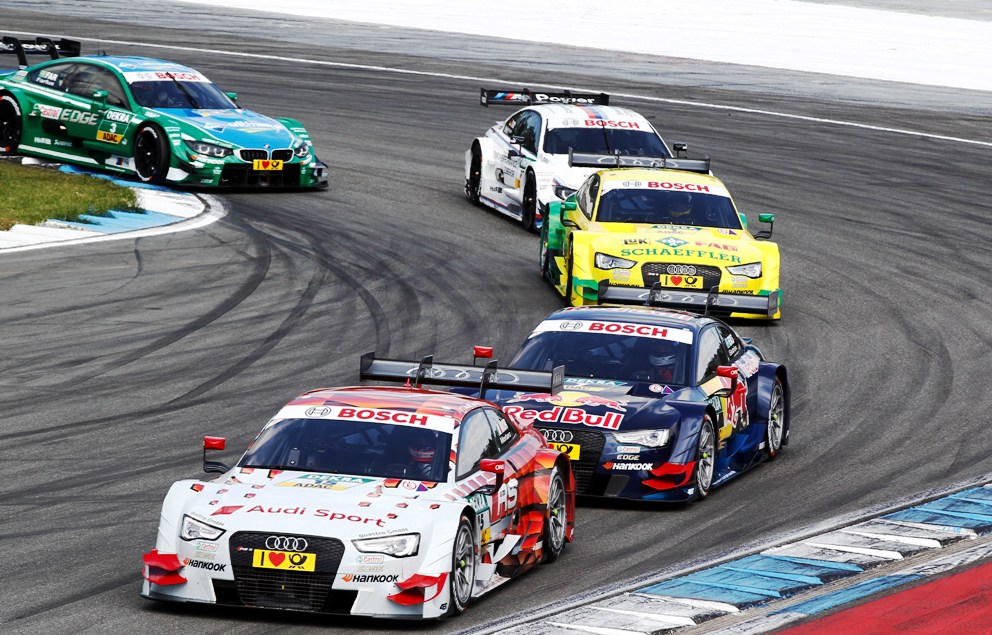 In front of 75,000 spectators (throughout the weekend) Audi left a strong impression at the 2014 DTM season opener. Three Audi drivers – Mattias Ekström, Adrien Tambay and Mike Rockenfeller – finished in the top four at the Hockenheimring. Seasoned campaigner Mattias Ekström in the Red Bull Audi RS 5 DTM of Audi Sport Team Abt Sportsline started his 14th DTM season for Audi as the runner-up. The Swede began the race on the harder standard tires, was running in eighth place in the initial stage and after switching to the faster option tires battled his way forwards position by position. Five laps before the end of the race, Ekström also overtook his team-mate Adrien Tambay in the Playboy Audi RS 5 DTM, who was initially running at the front of the field but on lap three had to let the subsequent winner Marco Wittmann in the BMW pass him. Due to a time penalty imposed for leaving the track in turn one the young Frenchman lost touch with Wittmann. Mike Rockenfeller in the Schaeffler Audi RS5 DTM of Audi Sport Team Phoenix drove an impressive race as well. The title defender advanced from position ten on the grid to fourth place on the same strategy as Ekström and, as a result, achieved a much better start of the new DTM season than in his championship-winning year of 2013. In contrast, the race ended in frustration for his team-mate Timo Scheider, who had started on the softer option tires and was running in third place when he was turned around by DTM rookie António Félix da Costa in the BMW on lap 34 under yellow flags. This incident, too, caused Scheider to subsequently lose a total of six positions – the last three following a tussle with Augusto Farfus on the final lap. Edoardo Mortara suffered major misfortune as well. The Italian in his first race with Audi Sport Team Abt Sportsline was running in front of his team-mate Mattias Ekström until lap 31 when he was forced to park his Audi Sport Audi RS 5 DTM with a front left puncture. “That was a real shame,” said the Swede. “This would have turned into a very cool fight at the end. I can live well with second place today, even though all of us are here to battle for victories.” Miguel Molina advanced from position 13 after having been relegated from the sixth to the last position on the grid following the qualifying session due to a part that was missing on his Audi Sport Audi RS 5 DTM. Nico Müller in the Audi Financial Services Audi RS 5 DTM of Audi Sport Team Rosberg experienced a turbulent DTM debut. After the start, the young Swiss dropped to the end of the field. Even though the Drag Reduction System (DRS) of his car did not function at a later stage of the race he finished in 16th place. His team-mate Jamie Green had to park his Hoffmann Group Audi RS 5 DTM in the pits after only two laps because the mount of his front splitter was damaged in a collision with the BMW of Augusto Farfus. “It was a good race for Audi,” said Dieter Gass, Head of DTM at Audi Sport. “That we managed to put three cars into the top four, particularly on different strategies, speaks for our new RS 5 DTM. Victory would have been possible too but Marco Wittmann was extremely strong this weekend – congratulations to him but, above all, to our guys: we’re all looking back on some tough weeks. We can build on this result and are now looking forward to Oschersleben.”The second race of the 2014 DTM will be held in only two weeks from now (Sunday, May 18).