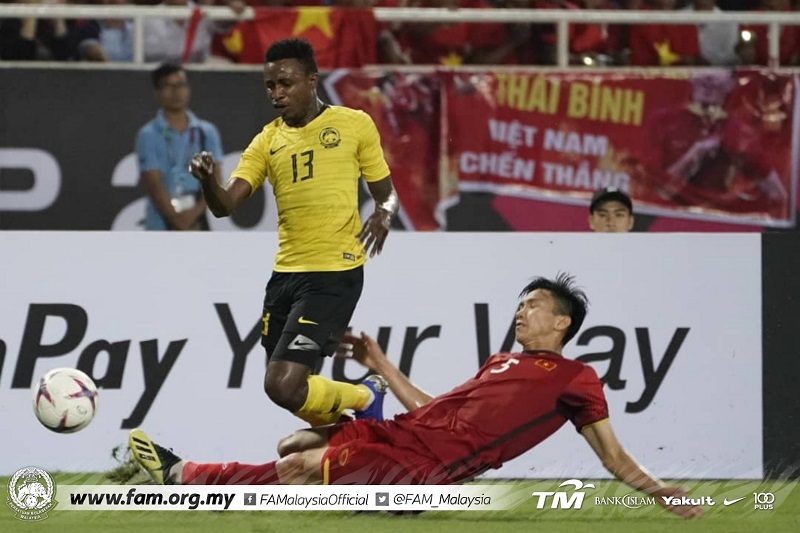 The much talked about midfielder Afiq Fazail’s return to training with the national team on Monday after being given extra special leave for his marriage coach Tan Cheng Hoe is keeping his fingers crossed that Mohamadou Sumareh will be available for his match plans against Thailand in this Thursday’s Group G World Cup 2022/Asia Cup 2023 qualifier.
The flanker Mohamadou Sumareh has thrown a spanner in the national team’s training but Cheng Hoe is not pressing the panic button just yet.
The naturalized Gambia-born Sumareh who plays for Pahang in the M-League is a cause for concern when he pulled up with “tightness” in his hamstring during training yesterday – a recurrence injury which has affected him many times both with Pahang and the national team.
With two days more the match against the Thais at the National Stadium in Bukit Jalil, Cheng Hoe is hoping things will be “positive” by the time he picks his team although at the same time he is prepared to make the necessary changes in his match plans.
“The players have shown ‘hunger’ in training and this pleases me. I have also called on the players to increase their intensity to face a high profile match,” said Cheng Hoe.
After Thailand, the Harimau Malaya will take on Indonesia at the same venue on Nov 19 -two vital home matches that could plot Malaysia’s hope in the World Cup/Asia Cup qualifiers after picking up only three points after three matches.
Malaysia had a head start to its campaign with a 3-2 win over Indonesia in Jakarta but defeats to the United Arab Emirates (1-2) at home and Vietnam (0-1) away sent the team sliding into fourth place in the five-team group.
The Thais top the group with seven points – the same as second-placed Vietnam – but separated by goal difference. The UAE is third with six points while Indonesia sits at the bottom without a point to show after losing all four matches.
Cheng Hoe has also not decided on who will play in goal. It is a toss between Johor Darul Takzim’s Farizal Marlias and Selangor’s Khairul Azhan Khalid. The third keeper in the squad is another JDT keeper Haziq Nadzli who was called up to replace Kedah’s Ifwat Akmal Chek Kassim. Ifwat withdrew due to personal commitments.
“Both, Farizal and Azhan are in form at present…playing with confidence. Such a healthy rivalry is good for the team,” added Cheng Hoe. – BY RIZAL ABDULLAH