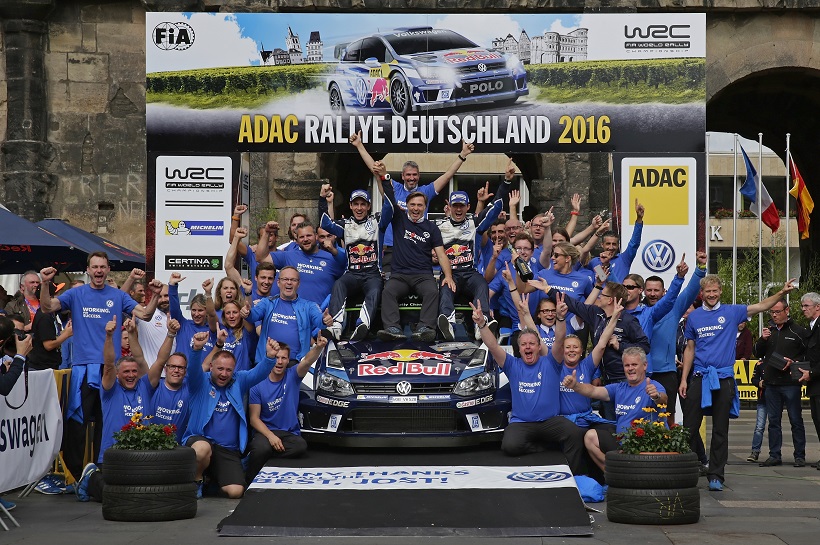 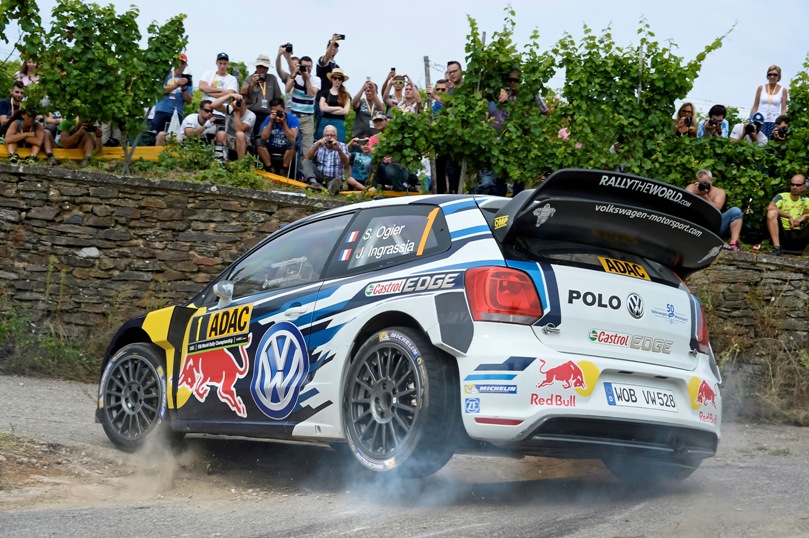 Sébastien Ogier/Julien Ingrassia (F/F) are back on the winning track – and it is asphalted: victory at the Rally Germany went to Volkswagen for the second year in a row. As they did last year, Ogier/Ingrassia won round nine of this season’s FIA World Rally Championship (WRC) with the Polo R WRC, making full use of the slight advantage that came with opening the route on the first all-asphalt race of the year. Extremely difficult conditions, ranging from dry asphalt to wet concrete, made tyre selection a real challenge all weekend. Ogier/Ingrassia produced a display worthy of world champions to extend their lead in the Drivers’ and Co-Drivers’ Championship by 14 points to 59. Their closest rival, Andreas Mikkelsen/Anders Jæger (N/N) just failed to take second place in a thrilling finale and ultimately had to settle for fourth. Jari-Matti Latvala/Miikka Anttila (FIN/FIN), in the third Polo R WRC, recovered from a damaged gearbox on Friday to score two bonus points on the closing Power Stage. They also fought back to finish eighth in the WRC class and contribute to Volkswagen taking a big step towards defending its title in the Manufacturers’ Championship.

“Winning the ADAC Rally Germany again is a great success for Volkswagen and an important step towards defending the title in the World Rally Championship,” said Dr. Frank Welsch, Member of the Board of Management of the Volkswagen Passenger Cars brand with responsibility for “Development”, who visited the works team in Trier alongside Christian Eisenlohr, General Secretary Volkswagen Passenger Cars. “The Rally Germany once again lived up to its reputation as being particularly challenging. Our entire team did an outstanding job in front of our home fans, and I would like to thank them for that,” said Welsch.

Thrilling down to the finish: Andreas Mikkelsen/Anders Jæger (N/N) once again found themselves embroiled in a gripping three-way battle for second place on the final day at the Rally Germany. In light of the looming rain, they opted for three soft and three hard Michelin competition tyres for the showdown on the closing three special stages. And thereby for one more replacement tyre than their rivals at Hyundai – but with the option of having more wet tyres in the damp conditions. The rain never came, but Mikkelsen/Jæger tried everything to seize second place, however, they were forced to pay the price of the extra weight of around 20 kilograms and overheating brakes: Fourth place, despite an immensely strong performance on all rally days.

The duo in second place in the championship staged a gripping duel with their Volkswagen team-mates Ogier/Ingrassia for the lead on Friday and Saturday, which went in favour of the three-time World Champion on the legendary “Panzerplatte”.

Fantastic atmosphere at the first asphalt event of the year

Thousands of fans at the “Panzerplatte” and along the special stages in the vineyards: The first asphalt event of the year presented not only a great driving and technical challenge, but also a mesmerising atmosphere. The WRC completed three days of classified stages around Trier, and there were completely different characteristics of asphalt stages on three occasions. The preliminary decision in favour of Sébastien Ogier/Julien Ingrassia came on the “Panzerplatte”, which with wide sections of track on concrete, bordered by the menhirs, characterised the rally Saturday. On the narrow asphalt routes through the vineyards, a gripping duel for the lead developed between Mikkelsen/Jæger and Ogier/Ingrassia on Friday. The stages “Drohntal” and “Sauertal”, which were held as a Power Stage for the first time, hosted spectacular rally action with a mix of fast sections and serpentines in the vineyards on Sunday.

An important step in the world championship for Sébastien Ogier/Julien Ingrassia in the drivers’ and co-drivers’ standings, and for Volkswagen in the manufacturers’ standings: With the fifth win of the season for the brand, the third for Ogier/Ingrassia, the team came a little closer to defending the titles in all three standings. Ogier/Ingrassia now have 169 points to their name, 59 more than Mikkelsen/Jæger in second place in the overall standings. Latvala/Anttila are in fifth place with a deficit of 80 points. In the manufacturers’ standings, Volkswagen defended a lead of 55 points.

This means that Ogier and Ingrassia could successfully defend their titles in the drivers’ and co-drivers’ standings already if they were to win the next event, the Rally France on Corsica.

Power Stage: Two bonus points for Latvala, one for Ogier

The Rally Germany came to a conciliatory end for Jari-Matti Latvala and Miikka Anttila. They were forced to retire their Polo R WRC with gearbox damage after just a few kilometreson Friday, but came back strongly under Rally 2 regulationson Saturday and Sunday and secured themselves two bonus points for the second-fastest time on the Power Stage. The final point on the Power Stage only just went to Ogier/Ingrassia, who beat Dani Sordo/Marc Martí (E/E, Hyundai) by one thousandth of a second. That corresponds to three centimetres.

Sébastien Ogier, Volkswagen Polo R WRC #1
“A fantastic feeling to be back at the top of the podium after this long dry spell. I am over the moon to have repeated last year’s success at the Rally Germany. The home win is extremely important to our team, Julien and I made great progress in the direction of the title in the championship standings – and naturally we are proud to have given our boss Jost Capito a worthy leaving present. It was wonderful having him as team boss and I wish him the same success in Formula 1 that he had with Volkswagen in the WRC. The weekend wasn’t easy for me since I really wanted to win here and then it is easy to be a little bit too motivated going into the race. Then there was the weather, which changed constantly and was extremely difficult to predict. In the end, I waited patiently for my opportunity, and with the times on the Panzerplatte in particular, built up the crucial lead over my rivals.”

Jari-Matti Latvala, Volkswagen Polo R WRC #2
“Congratulations to my team-mate Sébastien Ogier. He picked up valuable points for Volkswagen in the championship this weekend. Unfortunately, this rally was over far too soon for Miikka Anttila and me. After the damage to the gearbox on Friday, we couldn’t do better than eighth place in the manufacturers’ standings. Two points on the Power Stage were only a slight consolation at the end, but at least they were something. Naturally I am disappointed, we had definitely aimed for more, but motorsport can be like that at times. Next up on the schedule is the Rally France. We won there last year and we will try to finish on the podium again there.”

Andreas Mikkelsen, Volkswagen Polo R WRC #9
“Overall I am very pleased with our performance, but the result could have been better with a little more luck. The entire weekend was dominated by the difficult tyre selection and every service ended with a decision being made at the last second. We opted for a totally different strategy on several occasions – this made things interesting, but it wasn’t always the right decision. We went on full attack again on Sunday, since we were competing against two very fast Hyundai in the three-way battle for second place. We wanted to give Jost Capito another rally that was as successful as possible one last time. He will leave the team at the end of August – and we have had an excellent time these past years. Anders and I have a great deal to thank Jost for. So we were definitely going to give it our all once again. Unfortunately, in doing so the brakes overheated and this took me out of the running. It’s a shame, but fourth place is a small consolation in view of the championship.”

Jost Capito, Volkswagen Motorsport Director
“A very emotional moment for me. Today was my last outing at a rally for Volkswagen before I move to my new job in September,” said Volkswagen Motorsport Director Jost Capito. “That makes it all the sweeter that we have something to celebrate, thanks to the victory for Sébastien Ogier and Julien Ingrassia. They drove a magnificent rally and I am particularly pleased to see the pair of them back on the top step of the podium after something of a barren spell. As much as they have had to suffer on gravel tracks as a result of the rules requiring them to open the route, thereby meaning they have no chance of winning, they used the slight advantage that this starting order has on asphalt. But it wasn’t easy here: Changeable conditions made it tricky to select tyres and left no room for errors. And I am just as proud of the performance of Andreas Mikkelsen and Anders Jæger, who showed themselves to be worthy rivals at the start of the rally. Unfortunately, this wasn’t quite enough for second place in the end, although they both invested everything they could. Jari-Matti Latvala was unlucky this time, his gearbox damage prevented him from showing what he can do here. I think that he will return even stronger at the Rally France. But I will be watching that from a distance.”

… the revenge of the cake. Jost Capito “presented” Jari-Matti Latvala with a cake at the 2014 Rally Sweden. In celebration of 300 stage best times, the cake ended up in the Finn’s face back then. After the Rally Germany came the rematch from Latvala’s perspective: As a farewell, a gateau landed on the face of departing Motorsport Director Capito, “launched” by the 2014 and 2015 runner-up in the world championship.