Home News Others Synergies between F1 and Road Car Development 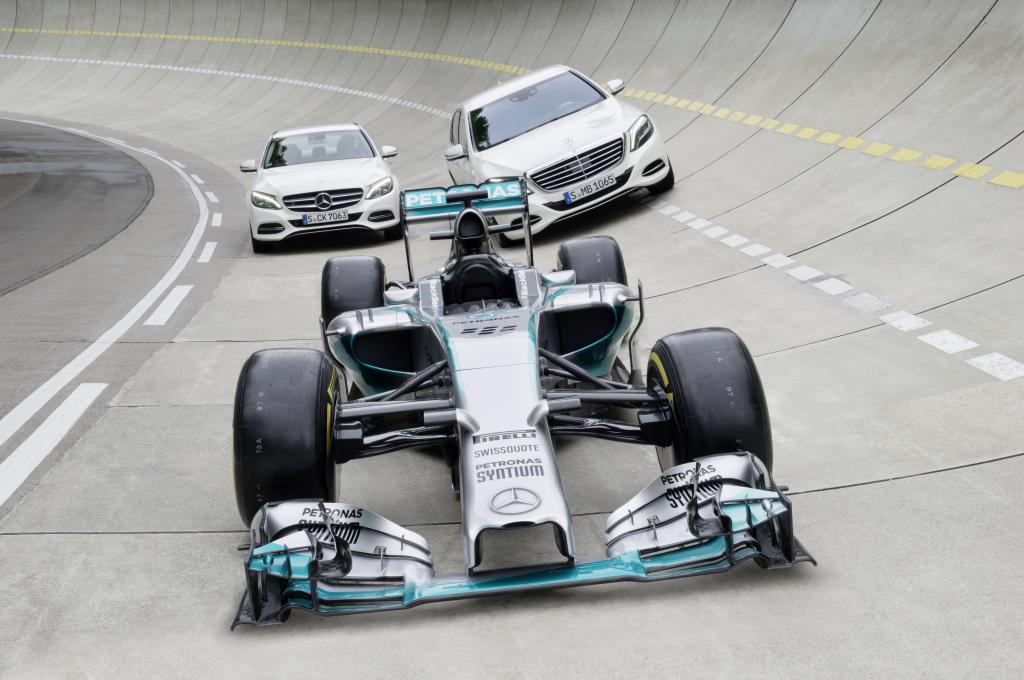 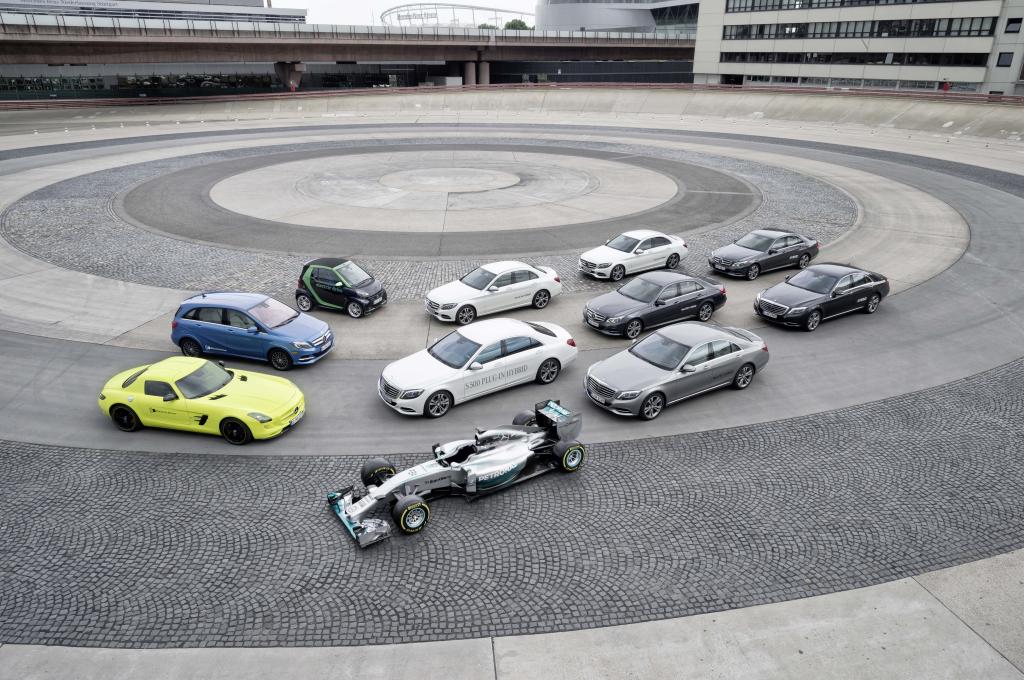 In Formula 1 Racing, performance is everything. But under the new rules for 2014, minimal lap times can be achieved only by maximum efficiency. A challenge Mercedes-Benz road car development has been confronted with since day one. As MERCEDES AMG PETRONAS continues to lead the way in the 2014 season, it’s time to take a look where engineers at Brackley and Stuttgart find synergies.
“We are often asked the question of whether there is actually any technology transfer between race and road car engineering. The answer is resoundingly ‘yes’ – but it’s a more subtle process than bolting bits from one car onto another”, says Paddy Lowe, Executive Director (Technical) at MERCEDES AMG PETRONAS. “There are examples of direct transfer – for instance the NANOSLIDE technology used to coat cylinder bore surfaces. And then there is indirect transfer, where F1 serves as a research laboratory for developing new solutions and showing the world what is possible.”
“Technologies like direct fuel injection found their way in to series production via the Silver Arrows of the 1950s”, adds Prof Thomas Weber, Member of the Daimler Board of Management responsible for Group Research and Head of Mercedes-Benz Cars Development. “Today, the challenges and complexities faced by F1 are quite similar to those faced by us in designing and developing advanced road cars like the S 500 PLUG IN HYBRID: To translate efficiency into superior performance.”
After entering Formula 1 as a works team in 2010, Mercedes-Benz did what it does best: worked hard and invested in engineering. While the team built itself towards on-track competitiveness, a technical challenge for 2014 had begun where the in-house engineering expertise of Mercedes-Benz was to play a decisive role. A development loop was completed from production to KERS (2009), the first foray of hybrids into F1, to production (AMG SLS Electric Drive) to a fully Hybrid F1 2014 (W05 Hybrid). Partnerships from projects such as KERS nurtured to achieve in-house expertise and on-track leadership. Development was rapid:
As the 2014 season approached, cooperation between Mercedes AMG Petronas and Mercedes-Benz Cars intensified. Today, key areas of cooperation are:
Aerodynamics: At first sight the aerodynamic design of F1 cars and road cars don’t have much in common, however both use many similar tools, in particular the wind tunnel and CFD (Computational Fluid Dynamics). Joint research and technical projects with Mercedes Benz include technology discovery and information exchange in certain areas, f.i. CFD techniques. 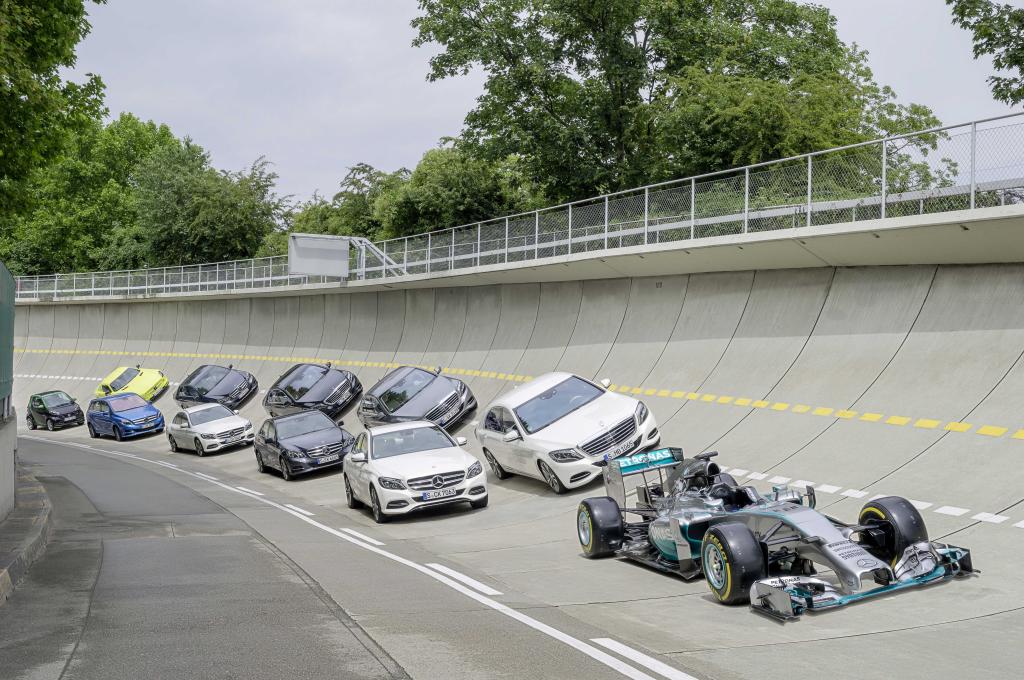 “On every step of the road to success, the expertise and resources of our colleagues at Daimler have been central to delivering the technological step change that was required for 2014”, says Paddy Lowe. “Mercedes-Benz in Stuttgart and in the UK have travelled the road to success together, opening and using new technological pathways. These pathways are today more relevant than ever because, under the new 2014 Formula One regulations, our mission has been aligned with that of our road car colleagues. We have been guided by an equation that applies to racing and to the road: ‘Efficiency = Performance’”.
“We all share the same mindset. At its core is the dedication to find the best solutions, and find them quick”, stresses Prof Thomas Weber. “To witness the teamwork for me is as much fun as watching the performance of MERCEDES AMG PETRONAS on the track.”
“In F1 and in road car design, it is crucial to design complete powertrain systems as a whole and advanced design and simulating tools are absolutely necessary to deliver an integrated high-tech package”, says Dr Joachim Schommers, Head of the Competence Centre Engines, Mercedes-Benz Cars Development. “We are witnessing a paradigm change in car design today. The time proven method of trial and error is very much over for various reasons, and it is replaced by computer based simulation techniques. I think it is safe to say that Daimler has been at the forefront of this paradigm change from the beginning. In the end, the winning formula both on the track and on the street is to combine the best people with the best methodology.”