Home 2022 Target acquired: Quartararo singled out as the man to beat 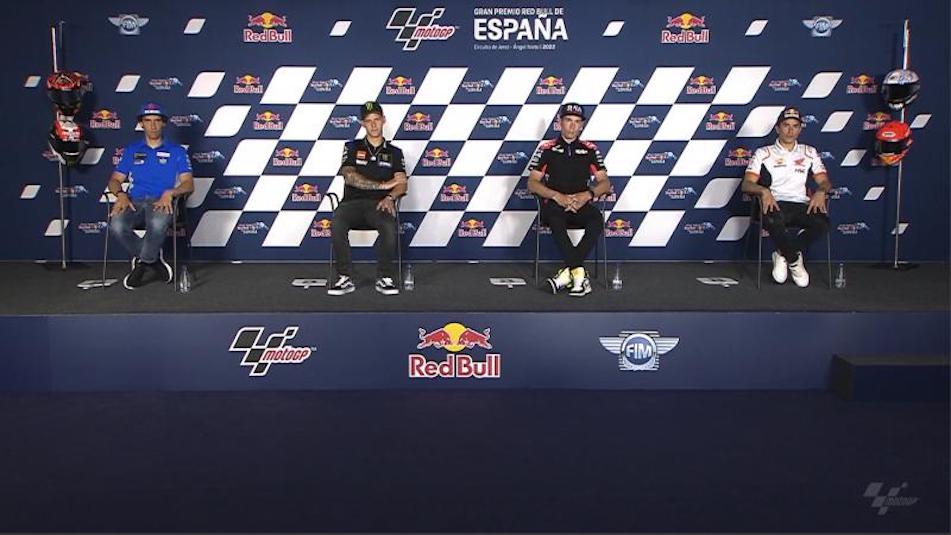 There’s one man on everybody’s lips at the Red Bull Grand Prix of Spain: Fabio Quartararo. And it’s easy to see why. Fresh from a first MotoGP™ win of the season in spectacular fashion, Monster Energy Yamaha’s reigning World Champion arrives at a circuit he’s dominated at in the past two years.

With back-to-back wins in 2020, before his hopes of a hat-trick were dashed in 2021 by arm pump, on his Jerez resume, there’s no doubting he’s the man to beat. His nearest title rivals though, whilst speaking at Thursday’s Press Conference, said they’re expecting a close fight.

Quartararo was untouchable in Jerez in 2020 and 2021. He won both races two years ago by a combined margin of 10.1 seconds, and he was already edging towards being two seconds clear of Jack Miller before arm pump struck last season. So does he feel he has some unfinished business to deliver this weekend?

“Payback? I will say no,” started the defending World Champion. “Because basically, it was not an issue with the bike, it was an issue from my side. I would say that I am arriving much more prepared. The surgery I had last year was perfect, so, of course, I feel we can go super-fast but we need to work on a normal weekend. I feel we have the potential to fight for the victory but we need to do it step-by-step, first Friday and then we will see our speed.

Topped by taking a dip in the pool, Fabio Quartararo proved that class is permanent as he romped to victory in the Portuguese GP

“It was an important moment,” replied Quartararo when asked about his first premier class victory since Silverstone last year. “Straight away I was able to be fast. In the race to make a 39.4 on Lap 3 was quite important. Of course, to fight for the victory after the tough start to the season is always great, and it’s even greater when you have back-to-back races, and I am at one of my favourite tracks.”

Arguably the two men most likely to stop the factory Yamaha rider from going back-to-back are Alex Rins (Team Suzuki Ecstar) and Aleix Espargaro (Aprilia Racing). The pair are breathing down Quartararo’s neck in the title chase and are hoping to sneak clear of the Frenchman at what they believe will be an incredibly close and competitive Spanish Grand Prix.

“We are at a track that I really like,” said Rins, now tied on points with Quartararo in the World Championship. “Last year, we had a small crash at Turn 6, so I did the race with just one wing. The pace was not that bad, so let’s see. Let’s see what awaits us this weekend and let’s try to do the same as last weekend. This is one of the tracks that a lot of riders will be fast at. It’s the first Spanish GP, so it will be difficult. Also, the level that we have in MotoGP is high this year.”

Launching from P23, the Suzuki rider found himself inside the top 10 by the close of the first lap after a sensational opening effort

Espargaro is equally determined, especially as we arrive at a circuit where he was able to finish just five seconds away from the eventual race winner in 2021. At that time, it was the closest Aprilia have ever been to a MotoGP™ race winner meaning, given the increased performance from this year’s RS-GP, the 32-year-old is brimming with confidence.

“Last season here was very good for us, we were quite close to the podium and the victory, so I hope with this year’s bike, that’s improved quite a lot, we can be even more competitive. This year things have changed a lot for us, but also for the rest of the riders on the grid. The level is very high, and we know how tough this category is.

“I remember that in FP3 here last season, there were just three or four tenths covering 15 riders, so it’s going to be difficult, and it’s going to be very important to be focused from FP1. With the system of having the first three sessions to be in the top 10, we know it’s very important, and every session will count.”

Following what seemed like a positive pre-season, many predictions ahead of Qatar pointed toward Honda finding some of their former glory. However, the Repsol Honda Team has struggled in the opening five rounds of the year with Marc Marquez stating the need for change. The new RC213V was aimed at giving HRC’s riders the rear grip it has badly lacked over recent years. But that design change has, as a result, taken away Marquez’s biggest strength: braking. Now unable to attack corners in a ‘V’ shape, Marquez is missing some magic.

The epic MotoGP™ last lap and celebrations in Portimao

The Spaniard opened up about Honda’s issues in Thursday’s Press Conference: “It’s true that it’s a bike that in big circuits it’s working really well like we saw in pre-season in Malaysia and then in Qatar. But as soon as we arrive at a small circuit and you need to turn in a short time, that is where we struggle a lot. That’s where we need to understand some more. The solution is close or far? We don’t know, we don’t know. The potential is there. I believe the potential is there. But we need to find a way how to take profit from that potential.”

Will we see the eight-time World Champion back at his best this weekend? Or will it require Monday’s crucial Official Test to find the breakthrough they so desperately need to ignite the number 93’s title tilt? We’ll find out this weekend at the Red Bull Spanish Grand Prix. – www.motogp.com