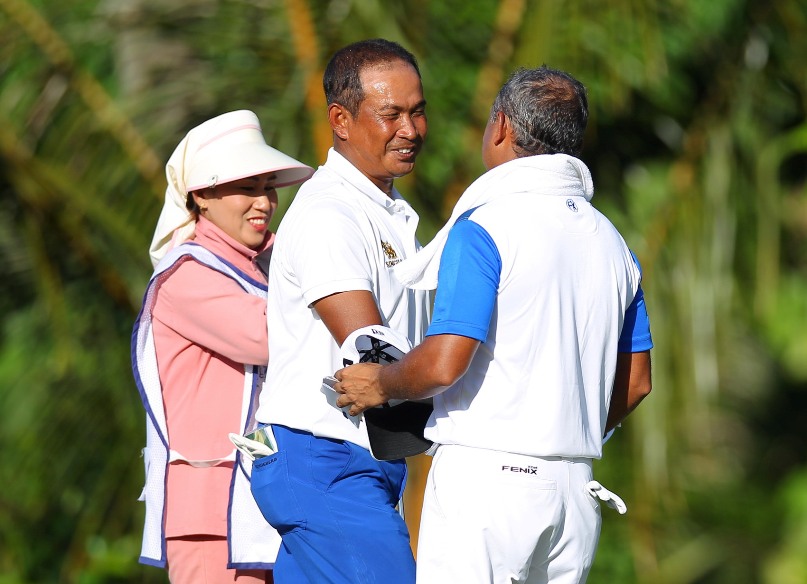 Thailand’s veteran star Thaworn Wiratchant hit a glorious back nine 28 en route to an eight-under-par 63 to snatch the halfway lead at the Queen’s Cup on Friday.

The 50-year-old Thaworn, who holds the most Asian Tour wins with 18 titles, was in mesmerizing form at Santiburi Samui Country Club, a venue which saw him triumph in the 2012 and 2014 Queen’s Cup and 2008 Bangkok Airways Open.

After turning in one under with two birdies and one bogey, the double Asian Tour number one rolled in seven birdies, including four-in-a-row from the 10th hole to equal his best round at Samui and lead by one from playing partner Nicholas Fung of Malaysia.

Fung, who is chasing a maiden Asian Tour title, carded a 68 while six players – India’s S.S.P. Chawrasia (68) and Rashid Khan (70), Filipino Angelo Que (70) and Juvic Pagunsan (67), Thailand’s Prayad Marksaeng (70) and Pasavee Lertvilai (66) – are two off the pace in the US$500,000 tournament sponsored by Bangkok Airways and Sports Authority of Thailand.

Straight-shooting Chawrasia, ranked second on the Order of Merit, could have ended the second round one shot closer to the lead had he not signed for a higher score on his last hole, the ninth, which he birdied but signed for a par. The Indian six-time winner, who sank an eagle and one birdie in his bogey-free card, can take over top spot on the Merit list if he finishes second with another golfer or better on Sunday.

Pagunsan sank five birdies against a lone bogey as he stepped up his chase for a second Asian Tour victory. The 39-year-old, Asia’s number one in 2011, needed only 26 putts to move into contention in the tournament which he has finished top-three in 2010 and 2012.

It was by accident, I was lucky! Some of the greens are quite fast but some are funny. I thought I would make the birdie putt on 17 but when it went near the hole, it just stayed out. This score is beyond my imagination.

The last time I shot a 28 was when I won the Malaysian PGA Championship a long time ago. I’ve not shot a 28 before on the Asian Tour.  (Note: Thaworn is the ninth player to shoot a seven-under-par 28 on Tour. Four players have shot eight-under-par 28 which is the lowest nine hole score in relation to par).

I’m too old to play on the Asian Tour these days. I do like to play in Asian Tour events as the Tour is like a big family to me. I like meeting up with old friends. The courses these days are a lot longer and I’m getting older. It’s hard. It’s getting tiring for me.

This morning, I wasn’t quite confident before I started but one of my management team gave me confidence and told me I’m still a golf legend. That gave me motivation. I want to win number 19, I want 20 and I want 21 wins. If I have a chance, I want more wins, not just 18 especially when I have the opportunity this week.

It was windy on the front nine and I just tried to keep the ball in play all the time and make some putts. It worked okay. I was playing with Thaworn and I was just trying to learn from him and tried to put my ball near his ball so that I could read his lines. It’s amazing, I couldn’t believe he shot 28 on the back nine.

I’m playing good. I’m happy. I’m looking forward to the next two days. If I win it, I can be number one on the Order of Merit. If I can finish as number one, it’ll be my biggest achievement. I’ll be trying my best to get it.

My putting has been a bit of a struggle. I’m hitting it good but need to putt better. I can win the tournament if I putt better. The greens are a bit slower than in previous years here. My confidence is high and I feel really good.

On his higher score signed on hole 9 where he shot a birdie three but signed for a par four?

It’s my own fault. I didn’t check my scorecard. This is the second time it’s happened in my career.

I hit it good out there and putted nicely. I’ve played good this season. When I changed my driver early this year, I managed to hit it farther and straighter which is a big advantage. Managed to make five birdies and hit a lot of greens. I really like playing on this course. I like the blind holes because you don’t know what’s going to happen. I love coming to this place too, the beach, the people and the food especially. Maybe I’ll need to take my chances better this weekend.

I started a bit slow, bogeyed the first and doubled the fifth. I came back after that. I’m hitting it pretty good except for those two holes which were bad holes. If you misjudge the wind or get an unlucky bounce, it can cost you. You just have to be careful and accept whatever that happen. It’ll be fun in the next two rounds, especially when I may get a chance to play with Juvic.

I’m in good form right now, hopefully I’ll keep it up towards the weekend. I’ll like to add another win outside the country. I’ve been winning back home but it would be better if I can win abroad. It would be another achievement for me. I’m not counting on it, but I’m hoping to do it. I have to think better on the golf course.