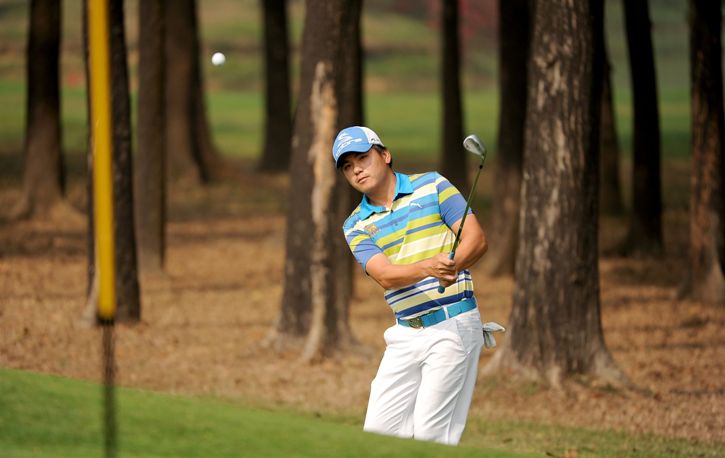 Oscar Zetterwall of Sweden, who won his first ADT title in the Philippines last week, was a further shot back at the Palm Resort Golf and Country Club alongside Nick Sherwood of the United States.

Play was suspended at 3.44pm due to thunderstorms before officials called play off for the day. No players from the afternoon session completed their rounds and will return at 7.30am on Thursday to resume play.

The 24-year-old Jakraphan, who won his first and only ADT title in 2013, battled back from an opening bogey with eight birdies courtesy of a hot putter.

“My putter was the reason for my score. The greens are a bit firm so I didn’t aim for the pins. I hit my ball to the middle of the green and my putter did the rest,” said Jakraphan, who has one top-10 result on the ADT this year.

“After my bogey, I told myself to calm down and look ahead. I played nicely from there and the birdies started to drop. It is nice to get off to a strong start. It has been a while since I won on the ADT so this is a good start to the tournament,” added the Thai.

Sutijet, chasing a first ADT title, fired a flawless round to continue his good form this year. The 28-year-old has three top-10 results on the ADT in 2016 and finished second at the Bashundhara Bangladesh Open on the Asian Tour.

Chia, a three-time ADT winner, has a point to prove after missing the cut at the Panasonic Open golf Championship in Japan on the Asian Tour last week. He mixed his card with eight birdies against two bogeys to stay close to the leaders.

“I’m happy with how I played after a disappointing week in Japan. I struggled last week but my game is improving. I don’t have a goal this week, I just want to sharpen my game and play consistently,” said Chia.

Like all other ADT events, the PGM Palm Resort Championship will offer OWGR points, which will be key for players vying to qualify for the Olympic Games in Rio de Janeiro this August.