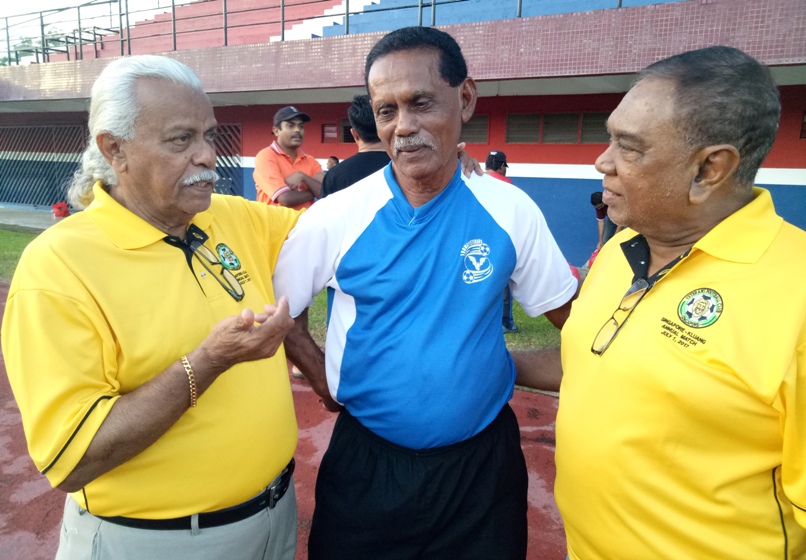 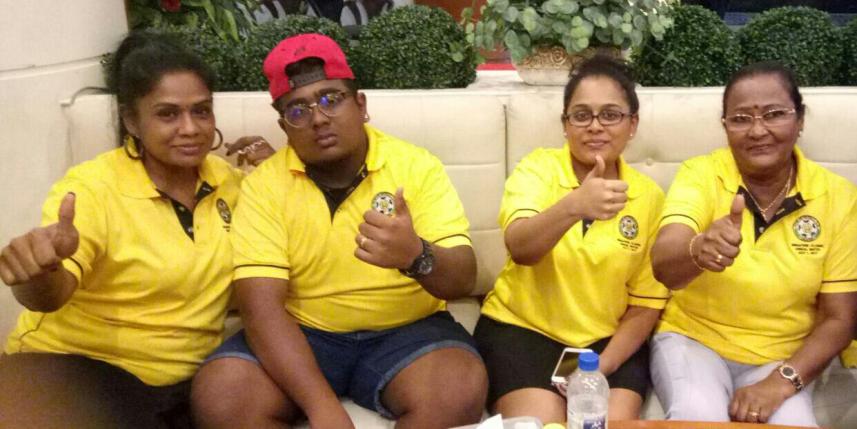 FEW football marriages ever go the way of the Singapore-Kluang bondships lasting 32 years and continuing to grow with every passing year.

It’s a special leaf that must be taken from the books of Singapore Veterans Football Club where they spend a weekend in the nostalgic Johor town as a perfect example of ‘Causeway Friendship’ with the Kluang Veterans.

The two generational teams, comprising former internationals , coaches, referees and team officials, play a ceremonial 90 minutes match over three halves, and they relish the post-match celebrations with makan and minum and in the amazing company of family and friends,

The two prime movers of this “bola-styled” congregation are Veterans Football Club (VFC) founder Karuppiah Kandasamy, the iconic personal security officer of the late Lee Kuan Yew, and Matthew Thomas, a former Johor state player, coach and referee. Both are in their mid-70s but with the fire in the belly to nurture an extraordinary football friendship and fraternity among the next generation.

Over the June 30 weekend for the VFC, they had some celebrity names like SNOC ‘Coach of the Year 1981’ Jita Singh (who also coached Pahang and Johor in the 80s) and former Malaysia Cup midfield icon R. Suriamurthi, both their presence added the extra flair for the 2017 date.

“Congratulations! Few teams can ever match this 32-year-old football friendship, where the importance of the friendliest of friendship bonds are plain to see, which are based on trust, honesty and sacrifice, a bond that it is as hard as God’s trust,” says Jita, who also relished the post-match toddy, a special ‘kampong’ palm wine, only relished in the rural proximity of Malaysia.

Suriamurthi, who also played for Singapore and Pahang, adds: “Football aside, we’re always in search of loyal friends who complete us. Kandasamy and Matthew have showed, by sterling personal examples, that football friends are someone who know what we are feeling before we say anything, a person who knows our sufferings, pains and darkest secrets in our hearts. And the players in both teams reciprocated the same way.” 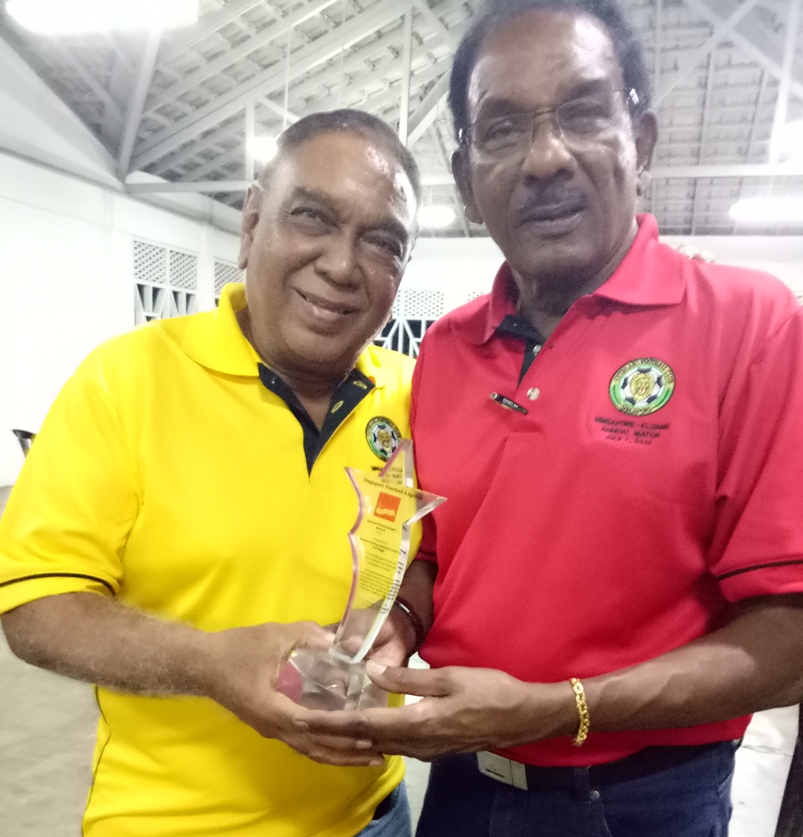 The “old guards” of VFC, which started this bondship in 1985, were precisely in the thick of action. The oldest player for the ceremonial 90-minute match at Stadium Kluang was 70-year-old Raffles Hospital gynaecologist Dr Tan Yew Gee, with majority of the players in the late 40s and 50s. But the generation gap was never in evidence as it was an amicably hard-fought sporting match, where Singapore won in a seven-goal thriller by 4-3, over three halves of 30 minutes.

I realised, after attending this 32-year Singapore-Kluang series, that friendship and neighbourliness are, at its core, recognising that football people, who live near and around us, form a community of potential long-standing friends and “family by proximity”. It widens our traditional definition of community to go beyond kinship, nationality, race or social group such as work or school ties.

Kandasamy, who is also a Match Commissioner in the S-League says: “Being good Causeway neighbours, through the beauty of tooball , is the perfect exceptional first step. My family and team’s buddyship with the Thomas family and Kluang players showed the importance of goodwill and harmony, regardless of race, language, colour or religion. Our longer-term breathtaking goal will be to show that through football, across-the-Causeway neighbourliness reaches out to embrace distinguishing people next door.”

Simply put, such bondships begin with the will or desire to connect with our generational families. Indeed, the need for neighbourliness is made even more urgent by dwindling family sizes, long hours at work and increased work-related travel. 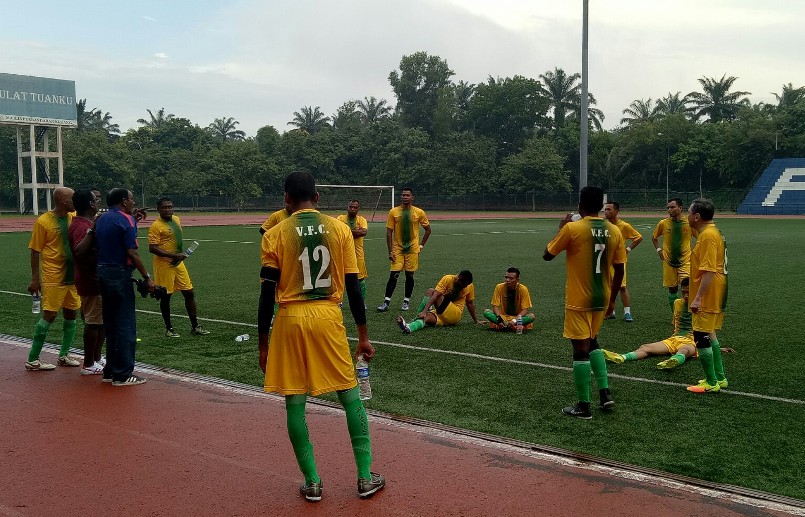 I would urge more Singapore-based football clubs to take the initiative from Veterans Football Club (VFC). Not only to revive the “kampong spirit”, because then you can unwind with family, friends, and neighbours after an ultra-hectic urban lifestyle in Singapore or the rustic laid-back life in Kluang. You can also build friendships and bonds with Malaysian-Singaporeans of different races and religions and strengthen the racial harmony, through football.

Credit must always go to Kandasamy, Thomas, Dr Tan Yew Gee, Suresh Kanda and the VFC and Kluang Veterans, for endearing through the Singapore-Kluang 32-year familyship.

As I watched the two teams integrate and socialise at the post-match reception, it dawned on me that this generational football teams on either sides of the Causeway have sincerely and seriously promoted through football, genuine family values of close “bola” bonding, active ageing, racial harmony and the singularly-special kampong spirit.

In many little humble ways, the VFC has always been the pride of the simple Singaporeans, among the football grassroots. It is one of Singapore’s best known veteran football icons. In my books, it is a tangible demonstration of the highly successful heartlander policy of football ownership, among those very passionate with the world’s No 1 sport.

Let’s use this “Causeway Friendship”, this  endearing “bola” spirit and contribute more to community efforts to forge a new way forward in the next phase of buddy-buddy partnership at either ends of the Causeway.

I look forward to the formation of new ties and friendships, new communities which will take root and blossom from these new bonds of neighbourliness. – BY SURESH NAIR