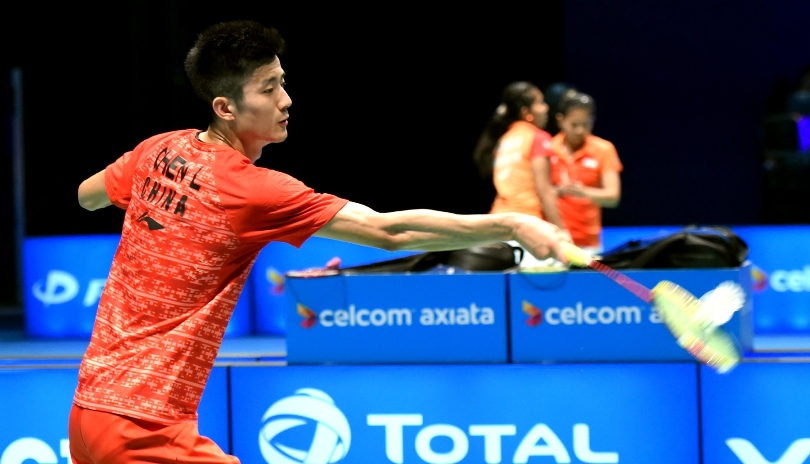 World number ones Chen Long and Carolina Marin crashed out in the quarter-finals of the Singapore Open Friday as both of badminton’s top-ranked players were unceremoniously shown the door by young upstarts.

The unseeded Ng dispatched Chen in 39 minutes, dazzling the crowd at Singapore’s Indoor Stadium with a series of cleverly disguised drop shots to take the first set 21-14.

Despite trailing early in the second set, Ng clawed his way back to level at 14-14, before pulling ahead to seal the win at 21-18.

“It’s a pity to have lost, especially since I was leading 14-7 in the second set,” said Chen, 27, who will attempt to win his first Olympic title in August.

“To have thrown away 10 points, I feel that perhaps I was thinking about winning the second set and wasn’t playing as rigorously as I should.”

This is not Ng’s first giant-killing act, having shocked two-time Olympic champion Lin Dan on home turf last November in the second round of the Hong Kong Open.

But he said Friday’s upset win against Chen was one he did not foresee.

“That was out of my expectations. Despite going behind in the second set, I was able to keep calm,” said the 21-year-old Ng.

“To have beaten an opponent of his (Chen’s) calibre, it is a extremely good experience.”

Marin was next to bite the dust later in the evening when she was shocked in a 71-minute thriller by Yamaguchi.

Yamaguchi completed her comeback in the third as she forced the Spaniard into several errors to clinch the game 21-18.

“The match was going good in the first set but she was playing better than me at the net. I had to be ready at the net and I wasn’t,” Marin said.

“Of course, I am too much disappointed because I would like to win today but I couldn’t.”

Yamaguchi, ranked 11th in the world, said she was unfazed despite going behind early on.

“I didn’t care when I was behind or what was the score. I just wanted to take it point by point,” she said, speaking through a translator.

Yamaguchi will face Thailand’s Ratchanok Intanon in the semi-finals, while China’s He Bingjiao will go up against compatriot and defending champion Sun Yu. – Agence France-Presse