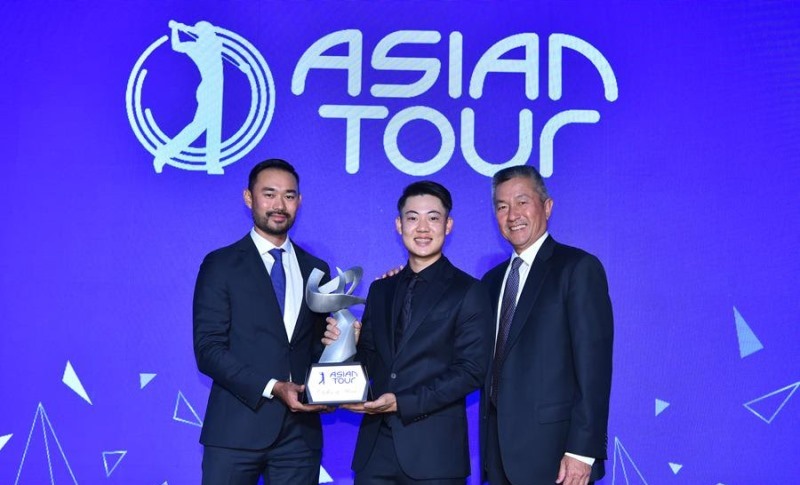 Tour stars, officials and key stakeholders gathered to celebrate a successful 2019 season at the Asian Tour Awards Ceremony which was held ahead of the season-opening Hong Kong Open this week.

Thai sensation Jazz Janewattananond bagged a total of four awards, which include the coveted 2019 Order of Merit crown and the prestigious Players’ Player of the Year accolade.

The 24-year-old Jazz also topped the statistics categories for Lowest Stroke Average with his record of 68.28 strokes and Total Birdies made with 265 from a total of 15 tournaments throughout his season on the Asian Tour.

Jazz was the toast of the 2019 season as he capped a phenomenal year with four victories and six top-10s which saw him break US$1million in total earnings and rise to career-high of 40th place on the Official World Golf Ranking (OWGR).

He is the youngest player to claim six victories on the Asian Tour and only the second player to secure four wins in a single season in the Tour’s history.

“It’s an honour to win the Players’ Player of the Year award. I’m glad the players think I deserve this award. Thanks to all my friends for voting and making me feel worthy of this award,” said Jazz at the Awards Gala which was held at the Courtyard by Marriott in Sha Tin on Tuesday evening.

Sadom Kaewkanjana was named the Rookie of the Year after collecting the most OWGR points from Asian Tour events amongst the newcomers in 2019. The 20-year-old Thai, who came through the Qualifying School, won on his very first start on Tour at the 2019 Bangabandhu Cup Golf Open in Bangladesh.

Adilson Da Silva of Brazil was the most accurate off the tee (84.17%) in 2019 while Thailand’s Pavit Tangkamolprasert, who won his second Asian Tour title at the Sabah Masters last November, hits it the furthest with an average drive of 307.50 yards.

Chinese Taipei’s Wang Wei-lun, who successfully kept his card by finishing inside top-60 on the 2019 Order of Merit, rode the hottest putter as he averaged 27.55 putts per round last season.

The Best Spectator Experience award went to Shinhan Donghae Open, a popular event sanctioned by the Asian Tour and the Korean PGA Tour, as an acknowledgement for its digital initiative and activities catered for fans.

The SMBC Singapore Open was voted by the players as the Tournament of the Year and its host venue Sentosa Golf Club, recently named the ‘World’s Best Golf Course’ at the annual World Golf Awards last October, was also ranked the number one golf course by the players.