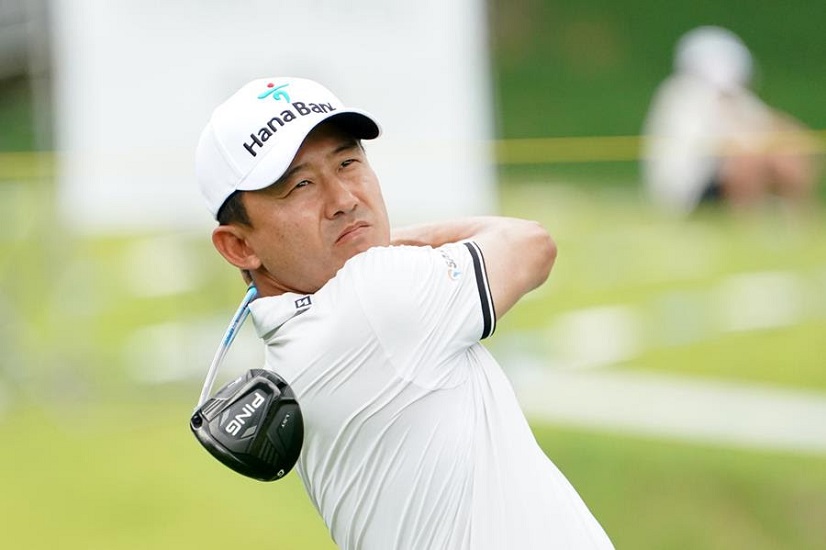 Seungsu Han of the United States set the early pace in the 64th edition of the Kolon Korea Open on Thursday, posting a flawless three-under-par 68 in the morning which was later matched by Korea’s Junghwan Lee and Jaemin Hwang at the Woo Jeong Hills Country Club.

A moderate breeze offered few favours in the morning and with rainy conditions during the afternoon and the threat of thunderstorms, the early field gained a slight advantage in the KRW1.35 billion event, which is co-sanctioned by the Asian Tour and the Korea Golf Association.

Lee, a two-time winner on the Korean circuit, also stayed blemish-free while Hwang capped a strong finish with three birdies in his closing six holes. Together with Han, they hold a one-shot lead over a host of players following the opening round of the Kolon Korea Open.

Lee was glad to rediscover his best form since completing his National Service. “I stayed bogey-free on a difficult course,” he said. “I feel good because I got a good result even though the weather was bad.”

“I haven’t played well after coming out from the army but my game is been more stable since I got married last year. I live in Gwangju and I drive about two hours to the course here every day. Nice to get off to a good start. I will stay calm and see how it goes the next few days.”

The Woo Jeong Hills course has lived up to its reputation as one of South Korea’s toughest tracks, but it was something that 35-year-old Seungsu Han was ready for. “There were some tough pins. I played good, hit a lot of good shots, and stayed in the right spots all day,” he said.  “I think this is my fourth time playing this tournament, so I am more familiar with it now. I know how they are going to set it up, so I don’t panic about it.”

“You just have to keep on hitting good shots, and leave yourself in the right positions here, especially with the pins that they are going to put on the greens. You have to be super patient. I hit the ball really well today, I kept it in play off the tee, hit a lot of greens and was also on the right side of the hole for the most part. When you do that you get some birdie looks.”

“It was good to get a round in before the rain, I got super lucky,” he added after the morning session at an event which is making a welcome return to the Asian Tour schedule after its reinstatement in 2018 was again halted by Covid-19 related travel restrictions.

Nitithorn Thippong, winner of the DGC Open, opened with a birdie on 10th but dropped a shot on 13 before picking up back-to-back birdies to turn in 33. He dropped another shot on the first but recovered with a birdie on the sixth to settle for a share of fourth place.

Putting and scrambling was the key to maintain momentum for the 25-year-old Thai golfer, who is still looking to capitalize on his first Asian Tour win after breaking through in India in March.

“I made a lot of long par putts today which was nice. The par on the 8th coming in was great. I thought I drove the ball out of bounds so I hit a provisional, but found it in the left rough and chipped it out to the fairway. Then I hit into the bunker, blasted it out, and made the putt from about 21 feet. That’s probably the highlight today,” he said.

Experience was also essential on a course that has a reputation for being one of the hardest in South Korea. “This is my second time playing here. I first played here in 2019 and I think that experience helped. The pins are always tough in Korea. I hit a great chip on the ninth to about two feet and made it for par too,” said Thippong.

“I have been feeling confident with my game since getting my first win in India. I had some issues with my new driver in England two weeks ago, so I went home and did another round of fitting. I’ve changed the shaft now and it’s working well again,” he explained.

“I drove the ball nicely today and that gave me a lot of opportunities to score. You have got to drive the ball well out there as the fairways are narrow,” he concluded.

Defending champion Junseok Lee of Australia and Korea’s Bio Kim, placed second on the Order of Merit, returned with identical 72s while Merit leader Sihwan Kim of the United States was left to rue a disappointing 75.