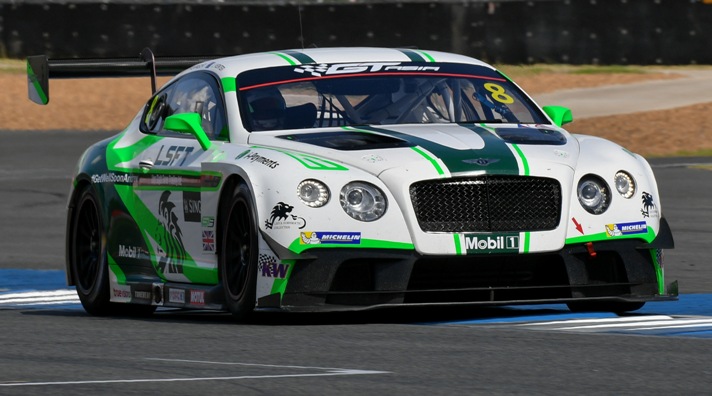 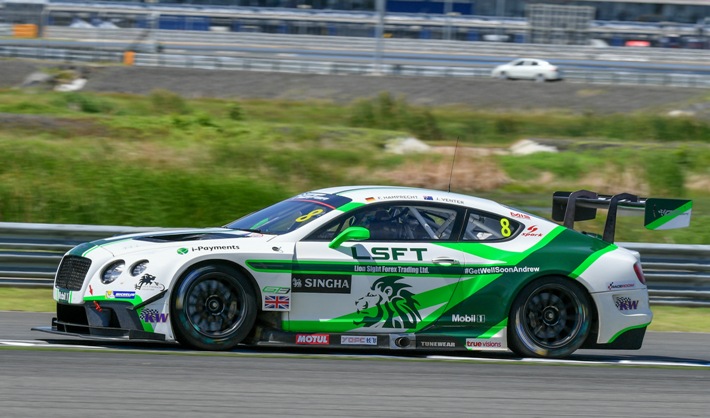 Jonathan Venter delivered another strong performance for the second round of the GT Asia Series but was blighted by bad luck in both races at the Buriram circuit in Thailand. After showing great pace in race one and running towards the front of the pack, Venter pitted for his 121 second pit stop, driver change and success penalty.
After the #8 Bentley was deemed to have breached the stop by 0.6s, a stop and go penalty was issued, which resulted in a P9 finish. After an excellent first stint by Venter’s teammate managed to get them up into P3 in race two, an ill-timed safety car hit the circuit before they could complete their compulsory stop and driver change.
This wiped out their advantage and forced them into an incredibly late stop after the safety car returned to the pits. Venter did all he could to regain time and positions lost but ultimately finished the race in P10. He is now second in the drivers’ championship but is confident that with no success penalty in Okayama and the strong performance of the Bentley that he will soon be back on top.

Venter was determined to gain a good start position to help him mitigate as much of the large success penalty as possible that he carried from Korea. The Australian managed to set a 1:34.310, which would see him start that afternoon’s race from P8.

Venter’s teammate Fabian Hamprecht, set a time of 1:34.683 in the second session to ensure that the #8 Bentley would start in P4 for Sunday’s race two.

Venter made an aggressive start and was forced wide at turn one but was able to hold onto his P8 start position by the end of the first lap with some great defensive driving. Venter quickly settled into a rhythm and was able to move up into P6 and began to close in on P5 around the 20 minute mark. As the race approached the compulsory pit stop window, the young GT driver had managed to lock himself into a battle with the Porsche in P5 but decided to back off, not wanting to risk the car or his championship.

With such a large success penalty to deal with, Venter decided to enter the pits shortly after the compulsory window opened to switch to teammate, Fabian Hamprecht. The #8 Bentley entered the pits in P6 and needed to remain stationary for 121 seconds. After a smooth change, Hamprecht got back out on track and began to push but was soon told that they had breached the minimum pit stop time by 0.6s and therefore had to conduct a stop and go penalty.
This was was a crushing blow to Venter and his championship lead but Hamprecht complied and would later finish the race in P9 after a quick and consistent drive.

“We had a pretty good start for race one, we managed to get up to P6, the car had very good pace and we were catching P5. Our pit stop was pretty good but after Fabian went out we had a stop and go penalty due to a short breach of the minimum pit stop time, which cost us very dearly. We were looking strong for a P5 or P6 finish but unfortunately finished in P9. I still maintain the lead in the drivers’ championship and we are starting tomorrow’s race in P4, so things are looking good with two new sets of tyres.”

It was up to Venter’s teammate to start race two in P4 and Hamprecht did a good job to maintain his position after the start, which set himself up for an attack on the leaders. Hamprecht managed to work his way up the field into P3 and build a gap of around 14 seconds. Unfortunately, bad luck for the #8 Bentley was just around the corner once again. Before Hamprecht could pit, the safety car was called out, which prevented them  from making their compulsory stop at the optimal time.

Their problem was further compounded by being picked up by the safety car as the leaders of the race, handing a big advantage to the leading Ferrari. Once the safety car finally returned to the pits and Hamprecht could change to Venter, the race was almost over. After losing time in the pits, Venter got back out on track and pushed as hard as possible, setting a leader matching pace on his way to the finish.
However, there was nothing he could do to regain the time and positions lost. Never giving up, Venter completed the final laps of the race at full pace and crossed the line in P10, which sees him now occupy second in the drivers’ championship.

“Very disappointing race two with the safety car coming out right before our pit stop. This meant that we weren’t allowed to pit in, so when we did, we lost all our time advantage from Fabian’s stint, which was very good. We were stuck in last position, so for the last 15 minutes of my stint I just had to try and make up as much time as possible but couldn’t get back to where I needed to be. I dropped back to second in the championship, so Okayama next round with no success penalty should get us a better result.”

“Jonathan drove another outstanding weekend! Partnering with Fabian who fitted in seamlessly with the team. Unfortunately, in race one, a mistake from the team in the pit stop costed them dearly with a drive through. In race two, the safety car came out at exactly the wrong time for the strategy of car #8. Instead of rejoining first or second, almost the whole field went by. Tough weekend but on the bright side we are still very much in a high position for the drivers’ championship and have lost our success penalty. I can only say sorry for race one and off to Okayama to continue where we left it in Korea!”