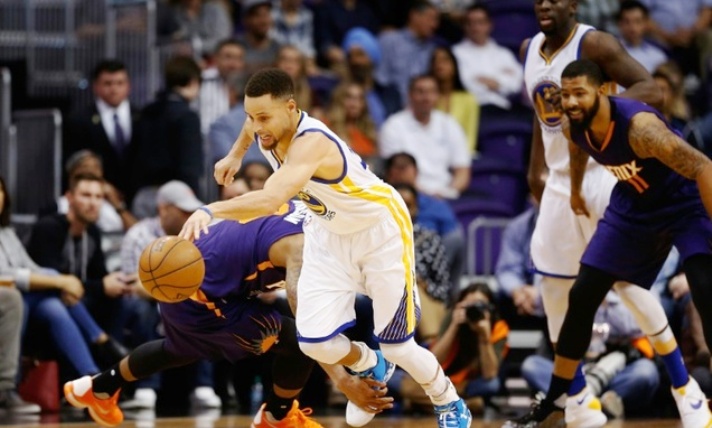 The Golden State Warriors kept their bid for a record-setting NBA regular season on track Wednesday with a 103-96 overtime victory over the Denver Nuggets.

Stephen Curry scored 31 points and the Warriors overcame a double-digit, second-half deficit to notch a club record 68th win of the season. They have lost only seven games.

Klay Thompson forced overtime with a three-pointer with 15 seconds left in regulation.

He scored 18 points to help the Warriors edge closer to the NBA record 72 regular-season victories posted by the 1995-96 Chicago Bulls.

Golden State need five wins in their last seven games to surpass the record. They finish out the season with home games against Boston, Portland, Minnesota, San Antonio and Memphis, and road games at Memphis and San Antonio.

“I’ve said many times over the years that I didn’t think that record would be broken, and it still may not be,” said Warriors coach Steve Kerr, who played on that 1995-96 Chicago team. “We have a tough finish still to go in the last games.

“To be part of both situations is unreal.”

Gordon Hayward scored 21 points and Rodney Hood added 20 points for the Jazz, who had won eight of 10 games.

The Nuggets are now tied with the Houston Rockets and Dallas Mavericks in a battle for the last two Western Conference playoff berths.

The Jazz were hurt by their performance from the free-throw line, making just 13 of 29 from the stripe.

Hayward gave the hosts an early lead in overtime, but Utah’s offense then succumbed under pressure.

While the Warriors continued to close in on the regular-season wins record, the San Antonio Spurs broke one mark set by that Michael Jordan-led Bulls team of 1995-96 with their 38th straight home win of the season without a defeat.

Argentine veteran Manu Ginobili scored 20 points, including nine in the fourth quarter to help the Spurs finish off a 100-92 triumph over the injury depleted New Orleans Pelicans.

The Spurs took control of the contest with a 22-9 scoring run spanning the end of the second quarter and first six minutes of the third.

The Spurs improved to 63-13, matching a franchise record for wins in a season.

The Spurs have won 47 straight regular-season games in San Antonio dating back to last year, the second-longest home winning streak ever behind the continuing 54-game home win streak of the Warriors.

Kawhi Leonard and Danny Green added 16 points each for the Spurs. LaMarcus Aldridge chipped in 11 points. Of 13 players who saw action for the Spurs, 12 of them scored. New Orleans, meanwhile, had just nine players in uniform. Seven of them scored in double figures, led by the 18 points of Alexis Ajinca.

The Raptors notched a milestone victory in Toronto, downing the Atlanta Hawks 105-97 to reach 50 wins for a season for the first time in franchise history.

DeMar DeRozan led the Raptors with a game-high 26 points to go with six assists and five rebounds.

“It means everything to me,” DeRozan said. “My whole career, I’ve been through the tough times, now to be called the winningest Raptors of all time and now to break a franchise record three years in a row — it definitely means a lot to me.”

In Minneapolis, Chris Paul scored 20 points, handed out 16 assists and pulled down eight rebounds to lead the Los Angeles Clippers to a 99-79 victory over the Minnesota Timberwolves.

The Clippers won their fourth straight, strengthening their grip on fourth place and the final home-court advantage berth in the Western Conference playoffs.

They are 6 1/2 games ahead of the injury-hit Memphis Grizzlies, who lost 109-105 at home to the Denver Nuggets and are now just two games in front of the Portland Trail Blazers for the fifth seed in the West. – Agence France-Presse