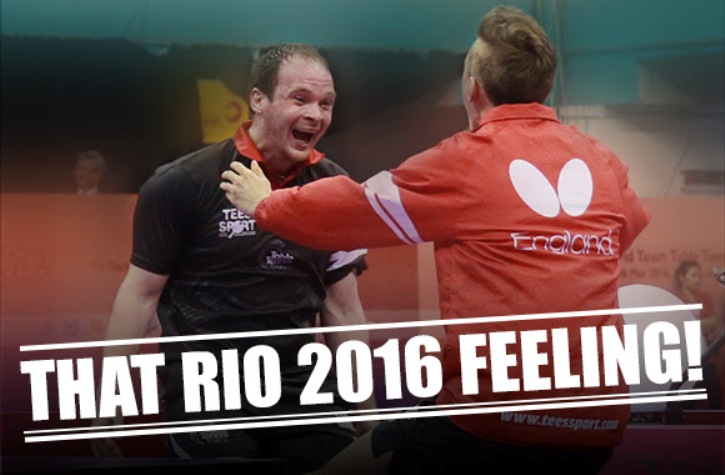 The nervous wait for 22 male and 22 female table tennis players is over, as the International Table Tennis Federation (ITTF) released the list of players who have qualified for the Rio 2016 Olympic Games through the ITTF Olympic Singles Ranking, published on Thursday 5th May 2016.

The ITTF Olympic Singles Ranking takes into account the players who competed in the continental qualifications tournaments but did not secure yet their places for Rio de Janeiro. The fact that only two athletes per National Olympic Committee are eligible for each of the Men’s Singles and Women’s Singles events added further intrigue to who will get the world ranking spots.

The heroes from England’s first World Team Table Tennis Championships bronze medal since 1983 earlier in the year, Liam PITCHFORD and Paul DRINKHALL just sneaked into the 22 Men’s places to qualify for the Games representing Great Britain.

On his Olympic qualification to be ratified by the British Olympic Committee, Liam PITCHFORD stated: I’m over the moon, after London it was my dream to qualify by my own right for an Olympics and now my dream has come true. My results at the recent World Championships has definitely has given me the confidence to know I can compete and beat the best players. I hope I can cause some more upsets in Rio!

The next step for these 22 male and 22 female players will be to get approval from their National Olympic Committees by 20 May, and the final list could well be slightly different, depending on the NOC confirmation of the strongest table tennis nations who have more than 2 eligible players in top positions on the ranking.

The reigning world champion, MA Long and the reigning Olympic champion, LI Xiaoxia are the players who have secured their places in the respective Men’s Singles and Women’s Singles events in Rio de Janeiro by winning the ITTF-Asia Olympic Qualification Tournament in Hong Kong earlier.

The Chinese National Olympic Committee has approved their participation, thus for China, one place remains in each discipline. On the ITTF Olympic Singles Ranking, FAN Zhendong is the highest ranked male player while LIU Shiwen heads the Women’s list. They will receive the invitations to compete in Rio.

If none of them is accepted, the next in line would be XU Xin, followed by ZHANG Jike for the men, and DING Ning followed by ZHU Yuling for women.

At the moment 62 qualified players are identified after the qualification tournaments and ranking selection are over. Once the NOC confirmation deadline is over for the singles, the selection for the 16 Men’s Teams and 16 Women’s Teams can take place.

Six continental places are awarded to the top teams, one each from Africa, Asia, Europe, Latin America, North America and Oceania.

The remaining team quotas will be allocated to the highest ranked teams on the May 2016 ITTF Olympic Team Ranking list, which have a National Olympic Committee and qualified 2 players in singles.

All together 22 team quota places are reserved for the qualified teams to form a team of three players, and if not all of these quotas are used to complete the teams, the remaining quota places will be offered to more players in singles by the Olympic Singles Ranking.

The final list of players to complete in the Rio 2016 Olympic table tennis event will be released by the ITTF by 30 June 2016.