Home International Panuphol In the Lead at Laguna National 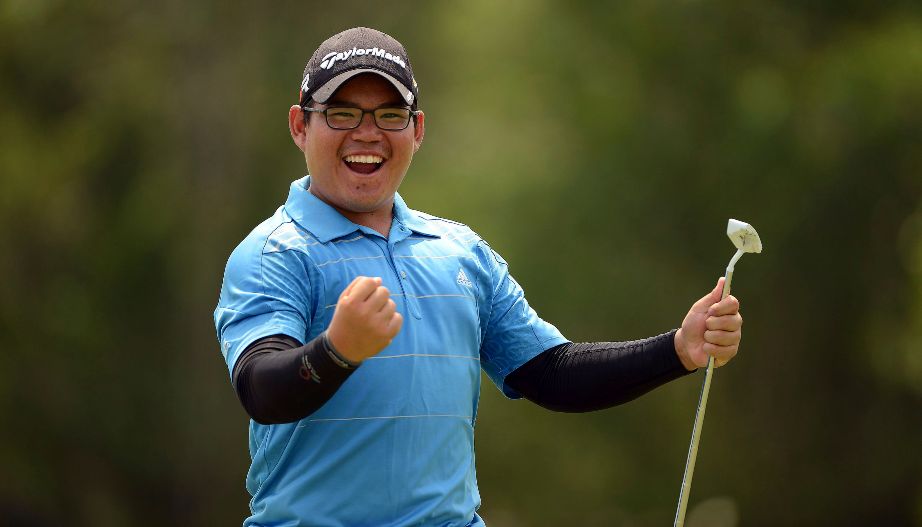 Thailand’s Panuphol Pittayarat did not wilt under the tropical heat and continued to  take the lead after signing for a four-under-par 68 in the second round of The  Championship at Laguna National on Friday.

Panuphol stayed ahead of the chasing pack with his two-day total of 13-under-par 131 even as Australia’s Scott Hend, Korean-American David Lipsky and Chile’s Felipe Aguilar put pressure on him by trailing closely by one shot at the US$1.5 million event sanctioned by the Asian Tour and European Tour.

India’s Rahil Gangjee, who is seeking to end a decade-long title drought on the Asian Tour, got back into the mix after signing for a 67 to share fifth place with Korea’s Baek Seuk-hyun and Denmark’s Anders Hansen.

Despite the scorching heat at the Laguna National Golf and Country Club, Panuphol kept his cool to maintain his overnight lead by trading five birdies against one bogey.

“The weather is really hot today. The two birdies in my last three holes were nice to end off my round and that cooled me down a bit. I really wanted to make that long putt (on 18) to take the outright lead and I am happy I did it,” said Panuphol.

Panuphol has not featured in the weekend rounds since the start of the season and he is delighted with his new-found position on the leaderboard this week.

“It’s nice to put myself in a good position heading into the last two rounds. I rather stay up there than to be chasing the lead. I just want to grab my chance and not let it go,” said Panuphol.

Meanwhile Hend, a five-time Asian Tour winner, took advantage of his booming drives to remain in the hunt for another victory on the region’s premier Tour.

The Australian, who topped the Asian Tour driving distance category on four occasions in the last five years, was a figure of consistency as he overcame a four-shot deficit to hit the front in the morning.

“I always try to drive the ball as hard as I can ever since I took up golf. I think I am just lucky to have the right muscle-make up and flexibility. Driving distance is the key to playing well on this course,” said Hend.

While Hend was delighted with his position, he conceded that the heat would be another major factor in maintaining his good run at The Championship.

“I don’t think it was easy out there. The weather’s so hot! It’s hard to keep your composure in such playing conditions. It makes you lose concentration. You just need to drink lots of water and keep yourself hydrated,” added Hend.

Still searching for his second victory on the Asian Tour, Gangjee credited his astute putting for a round which has brought him closer to winning again.

“My putting was very good today. The greens are really good here and I’ve been putting well for the last two rounds, especially today. I made a lot of long putts and I started to get the birdies going. The confidence came back and I hit the ball better,” said Gangjee, whose lone victory on the Asian Tour dates back to 2004 in China.

A total of 72 players made the cut which was set at four-under.

Leading scores after round 2 of the The Championship being played at the par 72, 7071 Yards Laguna National Golf Club (am – denotes amateur):