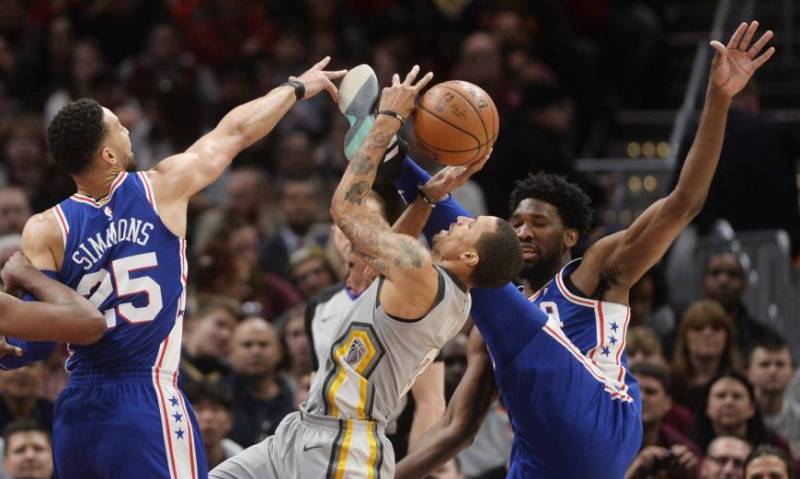 The Philadelphia 76ers led wire-to-wire in a 108-97 victory over the Cavaliers in Cleveland on Thursday, perhaps the perfect sales pitch if they want to lure LeBron James to Pennsylvania next season.

The 76ers, who had lost 11 straight games to the Cavs, were fueled by 22 points from shooting guard JJ Redick, who connected on seven of 11 shots from the floor, including four three-pointers.

It was a rare road win for the Sixers, who notched just their second win in their last eight away games.

James, who said he was flattered by three billboards rented by a Pennsylvania company in the Cleveland area urging him to consider a move to the Sixers as a free agent next season, led all scorers with 30 points.

That included a short jump shot in the first quarter which came after James escaped a double-team by dribbling behind his back and through the legs of teammate Tristan Thompson.

He added nine rebounds and eight assists but Cleveland, who closed within one point with 2:25 remaining after trailing by as many as 13 in the fourth quarter, were never able to get in front.

“Looked like we had some heavy legs tonight,” James said. “We fought back but it’s been a tough stretch for us playing every other day the last four weeks.

“But we’ve got to figure it out,” he added. “We still had a chance to win. Couple breakdowns down the stretch didn’t allow that to happen. Give credit where credit is due. I thought Philly played well.”

Things got testy in the waning seconds, when Philadelphia forward Dario Saric dunked and Cleveland’s Jordan Clarkson, irked that he didn’t just let the clock run out, bounced the ball off Saric’s back to earn an ejection.

“If anybody say different, that they wouldn’t have did that, that they’d have did something different, or anything else, they lying,” an unrepentant Clarkson said.

In Miami, Los Angeles point guard Isaiah Thomas scored a season-high 29 points in the Lakers’ convincing 131-113 victory over the Heat.

“It was beautiful to watch Isaiah in the fourth quarter again,” said Lakers coach Luke Walton. “It was flashback to what he did to everybody last season. It was a lot of fun to watch that, see him do his thing.”

The Lakers won in Miami for the first time in a decade, halting whatever momentum the Heat had built with wins over the Memphis Grizzlies and the 76ers.

Veteran Dwyane Wade, who drained the game-winner against the 76ers on Tuesday, delivered another vintage performance in his seventh game back with the Heat since he was traded from Cleveland.

But his 25 points weren’t close to enough against a Lakers team untroubled by any defensive effort Miami, who gave up the most points they have allowed this season.

Julius Randle scored 25 points for the Lakers and Brandon Ingram added 19 before a premature departure with a left hip flexor strain — the only downside for the Lakers on the night.

The Lakers are now 4-0 since the All-Star break.

In Portland, the Trail Blazers rallied in the fourth quarter to beat the Minnesota Timberwolves 108-99, moving within half a game of the T’Wolves for third place in the Western Conference.

Portland struggled from three-point range for most of the game. But trailing by six in the fourth quarter they reversed the trend to produce a 20-4 scoring run.