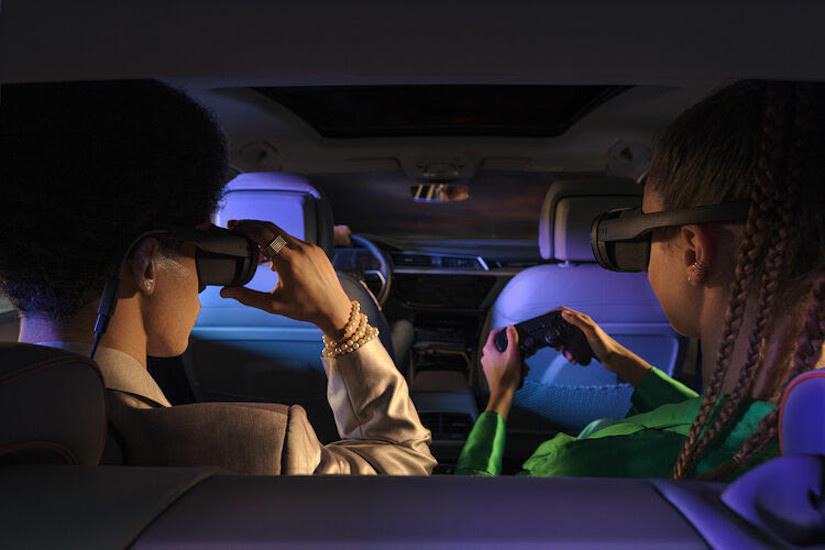 Exclusive preview of the game “Pixel Ripped 1995: On The Road”

Audi will be represented at the CARIAD pavilion

The brand with the four rings has delivered. At the 2019 Consumer Electronics Show (CES), Audi announced it would transform its vehicles into an experience platform for virtual reality (VR).

Selected models have been “holoride-ready” since the summer. Audi will return to CES Las Vegas from January 4 to 6, 2023, to offer media professionals and trade show visitors current content and a new VR game through “experience rides”.

Following the launch in Germany, the VR entertainment offering will become available in other European markets next year.

Audi is the first car manufacturer in the world to bring virtual reality entertainment by holoride to series production. At CES 2023, visitors can experience rides in the rear of an Audi e-tron and e-tron Sportback. The Audi Hub at the Waldorf Astoria will be their starting point.

Behind holoride is a new technology that adapts the virtual content to the car’s driving movements in real time. For example, if the vehicle takes a right turn, the spaceship in the virtual world will also fly to the right. If the car accelerates, the spaceship speeds up, meaning a ride in the car becomes a multimodal gaming event.

An added bonus is that by synchronizing the user’s visual and felt experiences, holoride reduces the risk of motion sickness, which many passengers experience when watching movies or other dynamic content in a moving car.

Audi initiated the development of this innovative VR or XR (extended reality) technology for backseat passengers, presenting it for the first time at CES 2019. The novel form of entertainment received numerous trade show awards.

The tech entertainment start-up company holoride went on to advance the technology and commercialize it for different manufacturers. After launching the platform in Germany in fall, holoride will enter other European markets in early 2023.

“Combining real-time vehicle data with virtual content creates a completely new type of experience. Vehicle digitalization is an essential building block in the ongoing transformation of the interior into a third living space. This highly personal space merges living and working spaces into one. This way, holoride serves as another proof point in our roadmap.”

Many Audi models are already holoride-capable

The model year 2023 vehicle (production date 25/22 and later) and the third-generation modular infotainment kit (MIB 3) are prerequisites. The Audi models mentioned are holoride-ready across the European market, Canada, the United States, Japan, and China.

The availability of holoride itself may be different depending on the individual market. A virtual reality headset enabled for holoride must be connected wirelessly to the vehicle via Bluetooth Low Energy (BLE).

At launch, holoride users can immerse themselves in two blockbuster games and a range of interactive content. In the VR game “Cloudbreakers: Leaving Heaven,” players control Dev, his scavenger robot Skyjack, and I.O.N.E. through the hostile skies of Stratus, collecting scrap metal and chasing AI guards, all while traveling to their actual destination.

This is accomplished through holoride’s “Elastic Content”: the game content adapts to driving movements, journey time, and driving route.

Following the successful VR titles “Pixel Ripped 1989” and “Pixel Ripped 1995”, a new version of the nostalgic game with a 2D look is coming out. In the game specially designed for the car, players accompany the Keene family on a Christmas trip and support David Keene on his mission. The twist here is that the car’s movements are incorporated into the game, developed by the game studio ARVORE.

The four rings at the CARIAD pavilion

CARIAD, the Volkswagen Group’s automotive software company, developed the technical requirements to use holoride in selected Audi models. For the first time, CARIAD will also have a pavilion at CES. It will present innovative solutions at the new convention center, including some from Audi or with Audi’s involvement.

This means the brand with the four rings will be represented at the CARIAD pavilion since Audi relies on the cumulative expertise and synergies within the Volkswagen Group to develop complex digital systems.

In CARIAD, digital user experiences and software expertise is bundled in each vehicle across the Volkswagen Group – covering everything from image processing and sensor and ECU technology to system architectures.