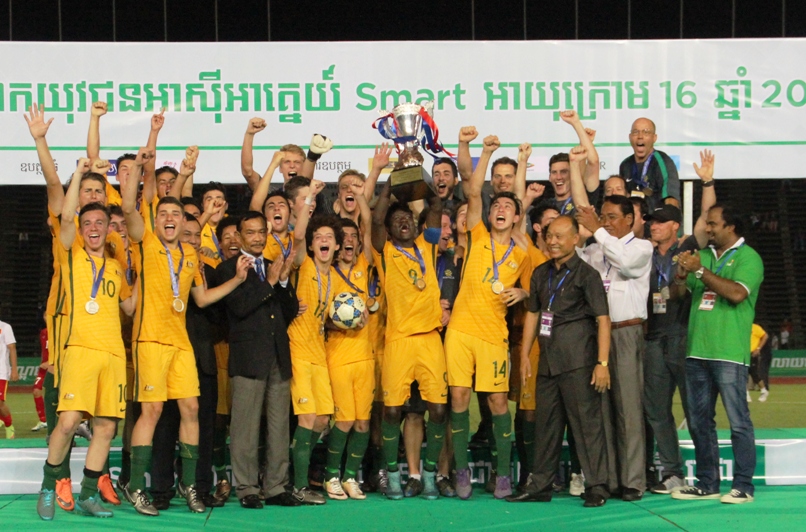 Australia staged a fabulous comeback to clinch the crown of the AFF Smart Under-16 Championship 2016 when they beat Vietnam 5-3 in the penalty shootout.

With the score at 3-2 to Vietnam’s advantage with just seven minutes to go, a mistake right at the death allowed Australia to score to force the game into the lottery of penalties.

And for the second time in three days, Australia held their nerves to win the shootout as they lifted their first title since Jakarta in 2008.

“The support from the stand was immense,” said Australian head coach Antony Vidmar. “That motivated us to push forward and never give up.”

As they had done previously in the group stage when they beat Australia 3-0, Vietnam played a more patient game as they defended stoutly and waited for the chance to go forward.

Australia held more of the possession at the start as they attacked from the either flanks to terrorise the Vietnam defence ably commanded by Uong Ngoc Tien.

Just 17th minutes in and Australia tested the Vietnam defence with a cross from Dylan Peirias that was flicked off the crossbar by Jacob Italiano.

Vietnam replied with a solo run in by striker Nguyen Khac Khiem but he failed to find the back of the net with just Australian keeper Noah James to beat.

However, Khac Khiem’s persistence paid off when he beat Thomas Aquilina for a cross that was slammed into goal by Nguyen Hanh Sang.

A goal down, Australia upped the ante in the second half but it was to be Vietnam who nailed their second goal of the game in the 56th minute with an individual effort from Nguyen Tran Viet Cuong witha stiff grounder.

Two minutes later, Australia pulled a goal back when captain John Roberts converted a penalty as Vietnam then came back with their third goal of the game on 77 minute with an exquisite one-time from Khac Khiem.

Seven minutes to the end, substitute Mirza Muratovuc ran through the Vietnam defence to lay up for Mark Moric to score as Vietnam’s defence then collapsed right at the death when a fumble from keeper Huynh Huu Tan allowed Roberts to head home and forced the game into penalties.

Australia were on target off Pieras, Moric, Roberts and Valenti with Bryce Bafford scoring the all important final goal to give them the title.

Vietnam converted theirs through Ngoc Tien, Vu Quang Do and Huynh Sang as Nguyen Xuan Kiem’s attempt was blocked.

“It was so close, very close to winning,” said Vietnam head coach Dinh The Nam. “It was a very good game against a very strong team – just unfortunate with the penalties.”

In the meantime, Thailand came in third in the competition when they beat hosts Cambodia 3-0.

The goals for Thailand were scored by Peerapat Kaminthong in the 13th minute, Kowawich Tasa (21st) and Arnon Prasongporn (38th).