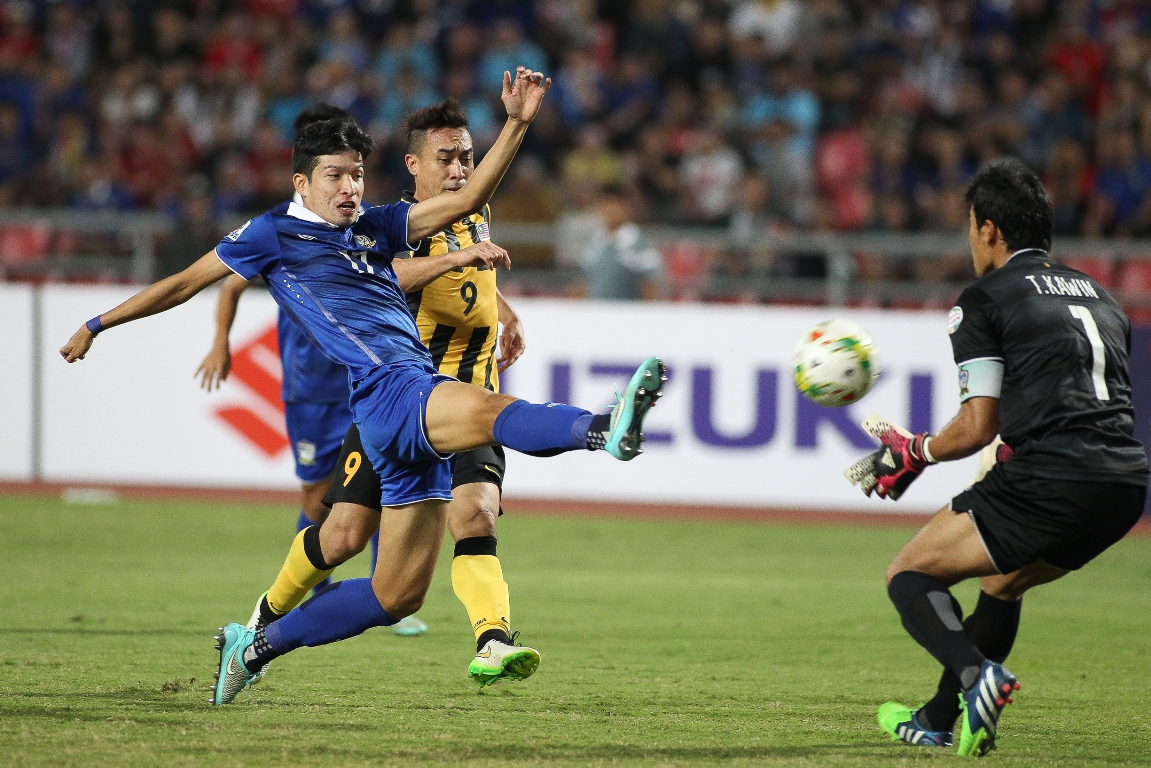 The first leg of the AFF Suzuki Cup final was absolutely brilliant with Thailand taking a crucial 2-0 lead over Malaysia in a thrilling battle at the Rajamangala Stadium here tonight. The two goals may be just enough for the Thais to regain the coveted title for a fourth time and after a 12-year break.

For the Malaysians, their hopes of winning the AFF Suzuki for only a second time since their famous victory in 2010, have now become a lot harder. Yet, the Malaysians have proven that despite all odds, they are capable of making a comeback as they sensationally pulled off against Vietnam in the semis.

“The job is not over yet. There’s still another 90 minutes and we have to play well to bring the cup back to the Thai people,” said Thai coach Kiatisak Senamuang after the game.

In front of over 45,000 fans, the Thais survived a difficult first half dominated by the Malaysians to walk away with comfortable buffer ahead of the second leg final on Saturday. While Malaysia missed their chances in the first half, the Thais needed a penalty to open their accounts against the Malaysians. In the 71st minute, the super skillful Channathip ‘Messi J’ Songkrasin tore down the left and whipped his shot through but it was parried away by Mohd Farizal Marlias. Prakrit Deeprom picked up the loose ball and relayed back to Adisak Kraisorn but he was brought down by a defender.

Star player, Charyl Yannic Chappuis, stepped up for the spot kick and shot low to the left post. Mohd Farizal guessed right but it was just not enough to stop the shot from going through.

With a few minutes on the clock, Malaysian coach wanted to maintain the score and was about to replace striker Norshahrul Idlana Talaha with midfielder Abdul Manaf Mamat when his worst nightmares came true. Messi J  blazed down the left and slipped tapped to Kroekrit Thawikan who easily doubled the score. The second goal may just be enough to help Thailand life the trophy.

But in the very last minute, Indra Putra Mahyuddin momentarily silenced the packed stadium as his header sailed towards the top left corner. To the dismay of his bench and almost 1,000 Malaysia fans, goalkeeper Tawin Thamsatchanan managed to tip the shot over.

Earlier in the first half, the Malaysians dominated much of the play. They had three clear cracks at goal in the first six minutes. Amri Yahyah’s solid header in the first minute almost surprised the Thai keeper while Norshahrul Idlan Talaha’s dipping shot was also saved.

As the game progressed, the Thais had a few shots but nothing really dangerous. Norshahrul and Amri, along with Indra Putra continued to pressure the goal but failed to break through, something they would live to regret later.

“Our backline collapsed after 90 minutes. But we have not given up yet. We still have another game in Bukit Jalil,” added Malaysian coach Dollah Salleh.