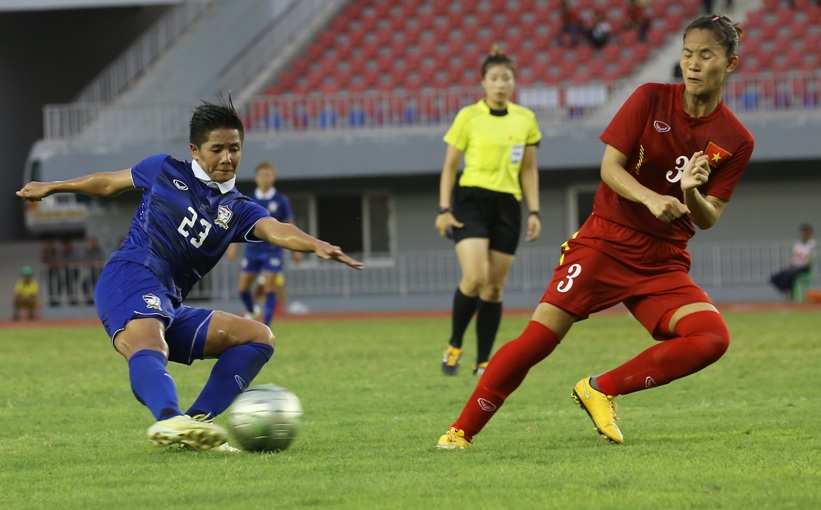 The outcome of today’s last group match between Thailand, the reigning champions, and Vietnam did not really matter as both sides had already booked their places in the semi-finals of the AFF Myanmar Women’s Championship.

While Vietnam stunned the Thais 2-0 to top the standings, tonight’s result only confirmed the final positions in Group A but not whom they will play in the crossover semi-finals on Tuesday.

Hosts Myanmar and Australia Under-20 play their last group match tomorrow to determine the top two positions and effectively complete the semi-final fixtures.

In tonight’s match, Thailand and their rivals took on a cautious approach, particularly in the first half. The urgency seen in earlier matches were missing, instead the teams took their time moving forward in attack.

The slower pace was perfectly understandable, considering they had already qualified and were saving themselves for the crucial semis battle.

Both sides had a fair share of attempts in the first half. Huynh Nhu and Pham Hai Yen had whiffs at goal but nothing really threatening.

Thai striker Kanjana Sung-Ngoen and Rattikan Thongsombut had their chances too but failed to convert them.

The pace picked up after the break and this significantly improved the quality of the game. As the game progressed, Vietnam pushed forward harder and began to get some of their shots in.

Nguyen Thi Nguyet had at least two close calls. Her team’s persistence finally paid off in the 85th minute when Huynh Nhu pulled right and slammed Vietnam ahead.

In the dying seconds, Nguyen Thi Nguyet managed to sneak in a second.

In the earlier match today, Philippines scored once in each half against Singapore to wrest their first win here.

Today’s match was also their last of the tournament as they failed to make the cut for the semis.

The consolation is that their finished third in the group ahead of Singapore who lost all their three group games. Both Philippines and Singapore both lost their first two matches against reigning champs Thailand and Vietnam.

The Philippines had a good start as they managed to breach the Singapore defence after five minutes with a crisp shot from striker Christina Marie De Los Reyes.

The Philippines were celebrating five minutes into the second half after Camille Angela Wilson headed in a corner kick from Claire Elisabeth Lim.

For the record, Vietnam, which scored 20 goals and conceded nothing, top Group A with a maximum nine points from three matches.

The Thais are second with six while the Philippines and Singapore were third and fourth respectively.