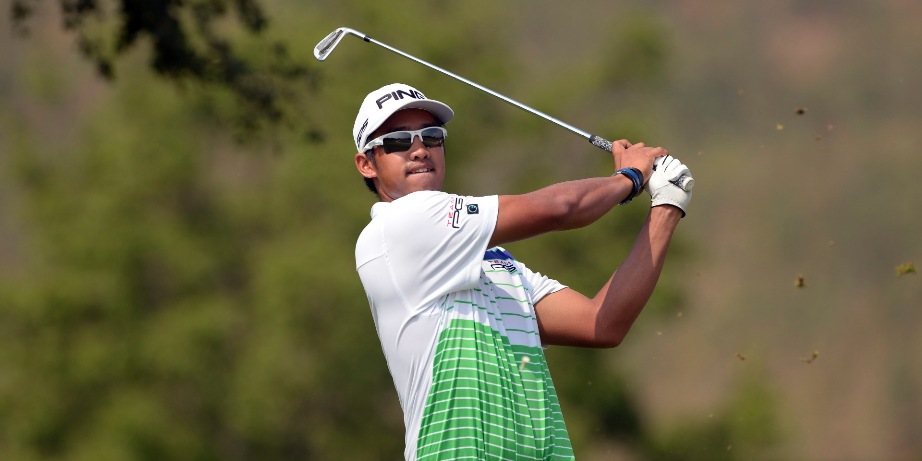 Malaysia’s Arie Irawan is ready to settle his ‘unfinished’ business on the Asian Development Tour (ADT) after he fired a sensational nine-under-par 63 to take the opening round lead at the RM200,000 (approx. US$60,000) PGM Sime Darby Harvard Championship on Wednesday.

Rob Seibly of the United States enjoyed a refreshing change of fortunes when he carded a 65 to take second place while Japan’s Terumichi Kakazu lurked closely after a 66 left him in third place at the season-opening ADT event.

Arie was on man on fire as he set off on an electric pace with six birdies in his outward-nine at the Harvard Golf and Country Club.

Arie, who has nine top-10 finishes on the ADT in 2014, is determined to get that elusive win this week and further boost his stature of one of Malaysia’s finest talents with the world ranking points available too.

“I’ve got some unfinished business to settle on the ADT. I felt I could have won one or two events last year but fell just short. My game is getting much better and I’m improving.

“It’s beginning to show this week. I hope to take advantage of my solid form and do well especially with the world ranking points at stake too,” said Arie.

Having missed out on his Asian Tour card at Qualifying School last week, Seibly was pleased with another opportunity to play on the burgeoning secondary circuit.

The American made a quick start with a birdie and an eagle in his opening three holes. He dropped a shot on five before responding with another two birdies on eight and nine.

Seibly surged further ahead with three successive birdies starting from 12 before trading a bogey and birdie on 16 and 17 respectively.

“It’s my first event on the ADT and I’m glad I got off to a good start. I didn’t get make it through the Qualifying School last week but the next alternative for me is to play on the ADT. It has been great so far,” said Seibly.

Seibly knows he will have to acclimate himself to the heat and humidity in the region to continue to stay in contention.

“The weather is really hot and dry which makes it really tough out there but I’m still very happy with how I played today. I’m looking forward to playing better in the next few rounds,” said the American.

Like Seibly, Kakazu is also enjoying an encouraging start in his maiden ADT event despite missing out on a top-40 place at Qualifying School.

The Japanese overcame an opening bogey on the par-four first before firing seven birdies en route to a 66.

“I’m happy. I did not have a good week in Thailand but it’s better today. I hope to continue playing the way I did today and hopefully it’ll set me on my way towards a solid result,” said Kakazu.

Since it was inaugurated in 2010, the ADT has grown from five events in the first year to a record 21 tournaments in 2014. The ADT has announced a provisional 2015 schedule of a minimum 17 tournaments with several more to be announced in due course.