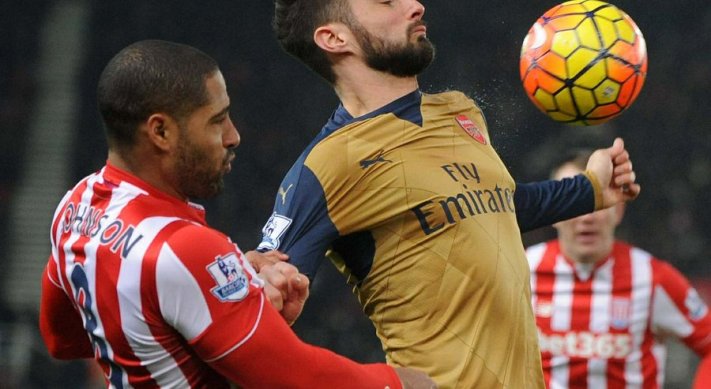 Arsenal’s goalless draw at Stoke took them to the top of the Premier League on Sunday after Manchester United captain Wayne Rooney scored late on to give his side a 1-0 win away to bitter rivals Liverpool.

A share of the spoils at the Britannia Stadium saw Arsenal return to the summit on goal difference ahead of surprise title contenders Leicester City, with both clubs now boasting 44 points from 22 league matches.

But for the second time in a matter of days Arsenal were left to reflect on whether they had gained a point or in fact dropped two after a thrilling midweek 3-3 draw with Liverpool.

It was yet another frustrating trip to Stoke for the Gunners, who have now failed to win at the Potters’ home ground in six attempts.

But it was England international Butland who produced the save of the match when, early in the second half, he dived low to his left to push away a goalbound-header from Olivier Giroud.

“We needed to be strong physically and had a great spirit, we fought very hard but couldn’t take our chances. It is a hard fought 0-0.”

The Frenchman added: “Petr Cech was outstanding, we needed a player like him in the air when Stoke played that kind of game.”

Meanwhile, Stoke manager Mark Hughes, whose side ended the weekend in seventh place, was heartened by his team’s latest impressive display against one of the Premier League’s leading clubs.

“Both teams approached the game in the right manner and created chances,” Hughes said. “All-in-all we’re pleased. It shows our progress. Teams have found it difficult to get points here.”

Earlier, Rooney — who made his name playing for Liverpool’s city rivals Everton — marked his latest return to Merseyside by scoring the only goal of the game at Anfield.

In his first game against United as Liverpool manager, Jurgen Klopp saw his team dominate only for Rooney to punish their wastefulness with his fifth goal in four games, a close range snapshot after Marouane Fellaini had hit the bar in the 78th minute proving the difference.

It was United’s only shot on target, but it was enough to give visiting manager Louis van Gaal his fourth win over Liverpool in four games and a first away victory since the 2-1 success at Watford on November 21.

“When you beat Liverpool, it is good for the fans and for the table as our competitors also lose points,” said Van Gaal. “It is a big step in a good direction and I am very happy.”

Victory took United to within two points of the Champions League berths and allowed them to reclaim fifth place from West Ham United, leaving Liverpool six points back in ninth place, their top-four hopes fading.

“It’s a derby and you have one job — to win it,” said a disappointed Klopp. – Agence France-Presse