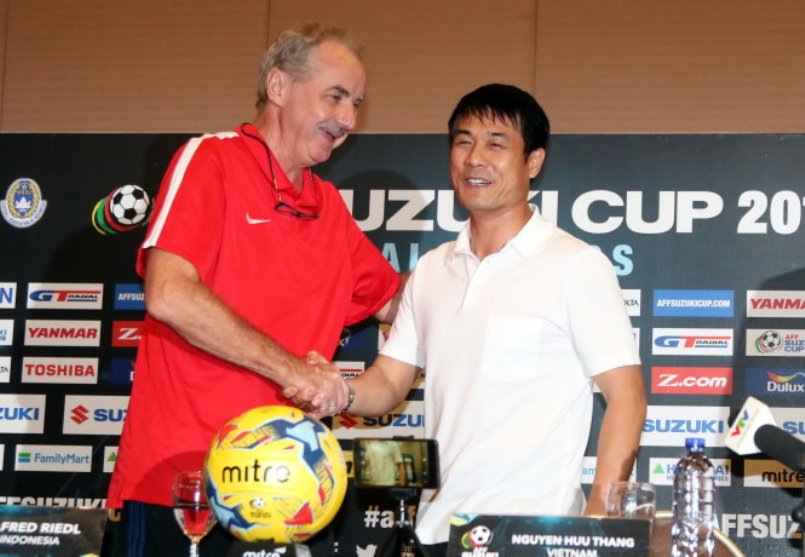 Indonesian head coach Alfred Riedl was gracious in victory over Vietnam this week when he said that the Vietnam Football Federation (VFF) should retain head coach Nguyen Huu Thang.

For the second edition of the AFF Suzuki Cup in a row, Vietnam failed to make past the semi-finals stage of the biennial championship when they were denied in front of their home fans.

Vietnam conceded a 2-1 loss to Indonesia in Bogor before being held to a 2-2 draw in the return tie in Hanoi.

“I think that the VFF should retain Huu Thang,” said Riedl.

“He has done a magnificent job with the Vietnam national team. He is a very good coach but was just unlucky on the night.

“He was up against a strong defensive team and even though Vietnam showed a lot of spirit, we were determined to defend.”

Huu Thang had taken up the post earlier this year following the departure of Japan’s Toshiya Miura. And in the course of the past several months, Vietnam have been developing well under his attacking philosophy.

This confidence allowed Vietnam to maintain a perfect record in the Group stage of the AFF Suzuki Cup where for the first time in years, they walked away with a perfect 100% record win.

Playing in Group B, Vietnam scored an opening 2-1 win over hosts Myanmar before edging Malaysia 1-0. They then completed their group stage with a 2-1 win over Cambodia.

“I believe that he has done a good job with Vietnam and there is no reason why he should not be retained,” added Riedl.