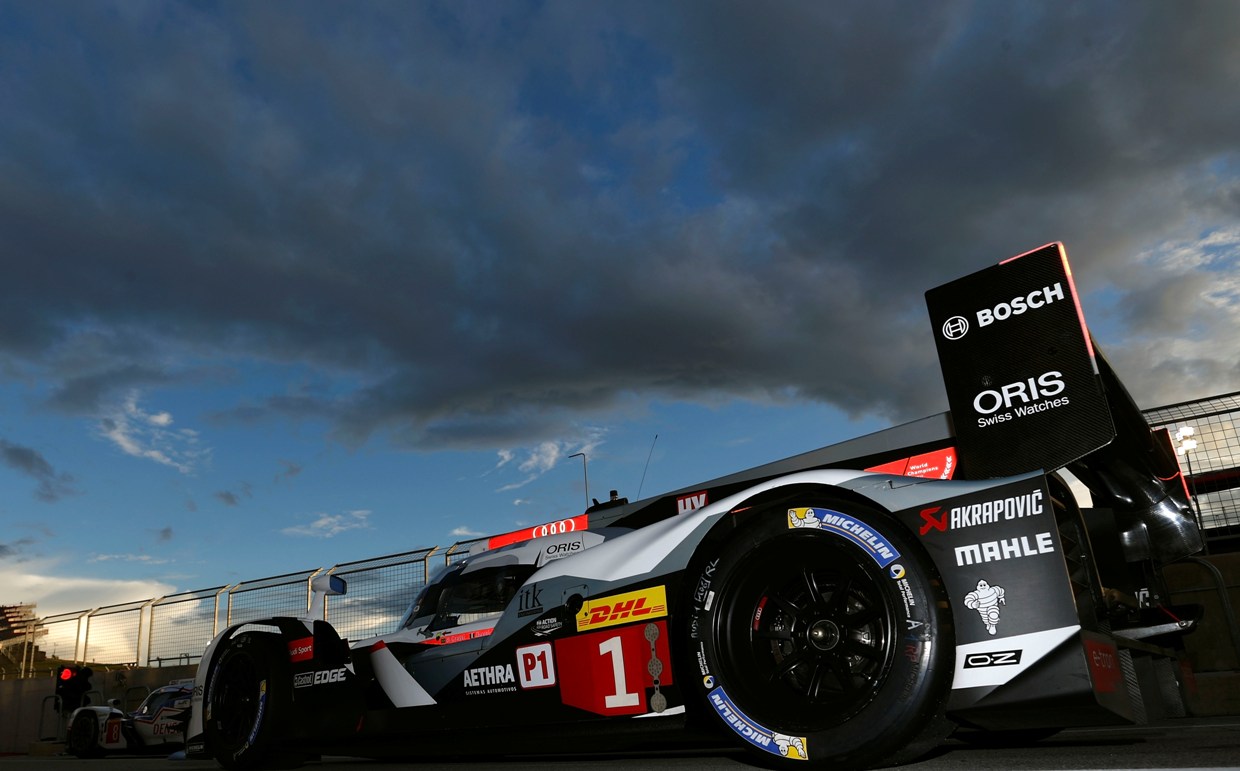 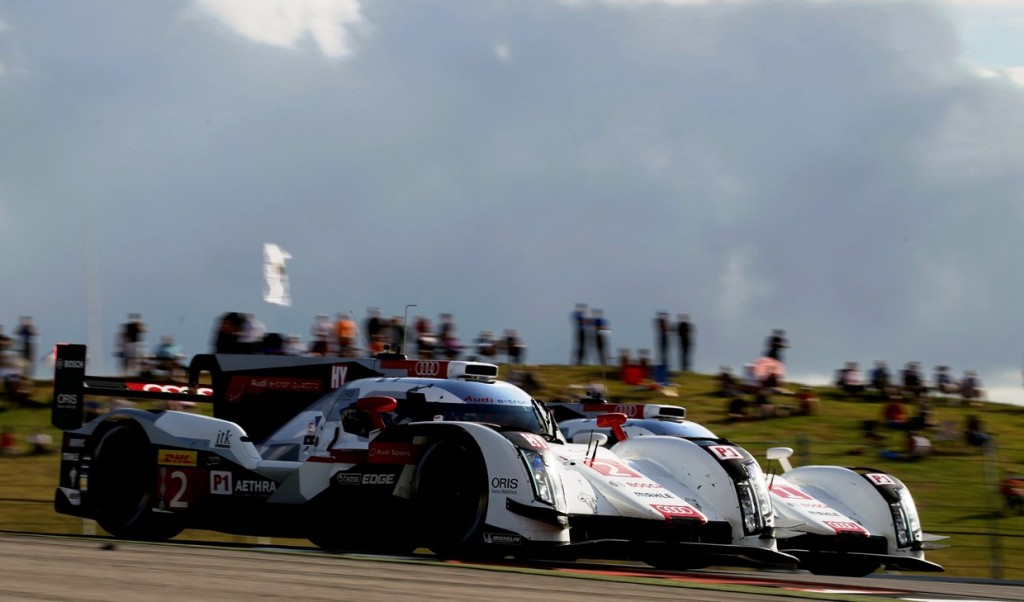 Audi looks at a good interim tally. In the FIA World Endurance Championship that has been held since 2012, the brand has now clinched 13 victories in 20 races. The most recent success at Austin (USA) marked the turnaround in the battle for the title and Audi, for the first time this season, took the lead in the manufacturers? classification. The team is aiming to further extend this advantage in WEC round five at Fuji (Japan) on October 12.

The hunter has become the hunted. At the season?s midpoint, Audi turned the tables and now, after four of eight rounds, has an 18-point advantage over Toyota. And now the new leader of the standings is facing a major task at the beginning of the second half of the season, as WEC round five is a tough one. The circuit some 100 kilometers southwest of Tokyo features combinations of highly opposite requirements for the aerodynamics of the race cars. Very slow sectors alternate with extremely fast ones on this circuit and the 1.4-kilometer section near the start and finish numbers among the longest straights in international motorsport. This is where engine power is the dominant factor.

Fuji remains an exceptional venue for Audi. Around the world, the brand with the four rings has been victorious at least once on eight of the nine tracks where WEC events have been held since 2012. The circuit near Mount Fuji has been the only blank spot on the WEC calendar to date. In the 2013 round in Japan, Marcel Fässler/André Lotterer/Benoît Tréluyer (CH/D/F) were on the pole position. However, heavy rain, which is not uncommon in this mountain region, prevented a regular race. After 16 laps behind the safety car, the race director stopped the event and the entrants received only half the number of points. Disappointment was not only great among the teams and drivers but with the crowd as well. The Japanese fans are very fond of sports car racing, fill the grandstands at Fuji year after year, and impress the drivers with great expert knowledge, numerous self-made fan posters, and a big rush for autographs.

This year now, Audi is set on complementing its success tally with a victory at Fuji. Fässler/Lotterer/Tréluyer have most recently scored WEC wins twice in succession ? in the Le Mans 24 Hours and in the turbulent round at Austin. Audi clinched the advantage in the manufacturers? standings with clever tactical decisions and impeccable driving in Texas. At the same time, the brand?s best driver trio has narrowed the gap to the leading Toyota drivers to eleven points.

But the Lucas di Grassi/Loïc Duval/Tom Kristensen (BR/F/DK) driver squad should not be underrated either. The number one Audi R18 e-tron quattro took second place three consecutive times in the past races. In the Far East, the trio is aiming to battle for the top spot just like their brand colleagues in car number two. Di Grassi and Kristensen are trailing their team-mates in the standings by only 13 points.

-Will Audi this year manage to take victory at Fuji for the first time?
-Will Marcel Fässler, André Lotterer and Benoît Tréluyer be able to come closer to the leaders of the standings in Japan?
-Will Audi further extend its advantage in the manufacturers? classification?
-Will the crowd be giving the same warm support to the German brand and its drivers as in the past two years?

Dr. Wolfgang Ullrich (Head of Audi Motorsport): ?An interesting constellation has emerged in the FIA World Endurance Championship (WEC) at the season?s midpoint. Following a tactically clever race at Austin, we took the lead in the manufacturers? classification and are now closer to our competitors in the drivers? classification. At the most recent event in Texas, the fans again saw a very thrilling battle by the three brands Audi, Porsche and Toyota, like previously at Le Mans. We know how challenging the race will be at Fuji but are set on making up more ground in the World Championship. And we?d really love to finally win in Japan too.?

Chris Reinke (Head of LMP): ?In Japan, we?ve still got something to make up for. Last year, there was a formal race result but factually no race because the drivers were only able to follow the safety car. This year, we?d like to experience a nice race without interruptions and are going to do everything within our means to repeat our performances at Le Mans and Austin in Japan. We?re hoping to be in contention for victory even though the track isn?t exactly ideal for our car.?

Ralf Jüttner (Team Director Audi Sport Team Joest): ?We?re very much looking forward to Fuji. The Japanese fans have a tremendous capacity for enthusiasm and love endurance racing in the WEC. The track at Fuji is very special. A year ago, we were on pole there but the race literally became a washout. It?ll be exciting to compete against Toyota in their home race and to challenge them. We?re going to leave no stone unturned to win at Fuji for the first time.?

Lucas di Grassi (30/BR), Audi R18 e-tron quattro #1 (Audi Sport Team Joest)
-Is experiencing his debut at Fuji this year
-Was the runner-up at Spa, Le Mans and Austin
?I?ll be driving at Fuji for the first time and am preparing for my debut in the simulator. I?m trying to build a wealth of experience this way without ever having been on this track before. That?s important because all of us can only do relatively few laps before the race, as there are three of us sharing a car in endurance racing. All of my team-mates have been there before, so I?m beginning with a small deficit. But I?m sure that with proper preparation I?ll be able to quickly achieve good lap times and hope that we?re going to score as many points as possible in the championship battle.?

Loïc Duval (32/F), Audi R18 e-tron quattro #1 (Audi Sport Team Joest)
-Together with his team-mates completed a one-two victory for Audi at Austin
-Has regularly been racing in Japan since 2006
?Some of us Audi drivers have a special relationship with Japan due to our careers ? and I?m one of them. This year, we?re aiming to deliver a particularly good performance at Fuji after last year?s race was held only behind the safety car. Fuji is a unique track in a beautiful region in the foothills of Mount Fuji. We?re set on showing an equally beautiful result to our many fans. It would be great to win there.?

Tom Kristensen (47/DK), Audi R18 e-tron quattro #1 (Audi Sport Team Joest)
-Spent his career in Japan from 1992 to 1995
-Is in third place of the standings together with his team-mate Lucas di Grassi
?I?m happy to be returning to a country that I owe a lot to. At the beginning of my career, I lived near Fuji and often raced on this track. This country played a decisive part in opening up the opportunity of a professional racing career for me. I?ve still got many friends there from the old days. Traveling to Japan with the world?s best automobile manufacturer today is a great feeling. I?ve competed at Fuji in the WEC twice before. The first track sector is very fast, the second one is still relatively fast, and the third one is narrow and slow.?

Marcel Fässler (38/CH), Audi R18 e-tron quattro #2 (Audi Sport Team Joest)
-Won the last WEC race at Austin with André Lotterer and Benoît Tréluyer
?Two years ago, I drove in Japan for the first time and have very positive memories of my two WEC runs at Fuji. Japan is a beautiful country with fantastic fans that enthusiastically support us. As this is a kind of home round for my two team-mates, we?re aiming to battle for victory with particularly great determination. Driving in the mountains with Mount Fuji in the background is an unusual feeling. It almost reminds me a bit of the Swiss mountains. The track has a unique character with its many different types of corners.?

André Lotterer (32/D), Audi R18 e-tron quattro #2 (Audi Sport Team Joest)
-Won the Le Mans 24 Hours with his team-mates in June
-Was on the pole position in Japan last year
?The race is a very special one for me because I?ve been living in Japan for more than ten years and am active in racing there as well. I?m highly motivated to battle for Audi?s first victory in Japan in front of many fans. Benoît Tréluyer knows the track very well. I?ve frequently driven there before too and by now Marcel Fässler feels comfortable in Japan as well. The track is very demanding and the set-up isn?t easy to achieve. On the long straight, our car mustn?t lose too much speed due to downforce but we?ve still got to be fast in the turns.?

Benoît Tréluyer (37/F), Audi R18 e-tron quattro #2 (Audi Sport Team Joest)
-Has spent twelve years of his career in Japan
-Is the runner-up in the standings together with his team-mates
?Fuji is the race track on which I?ve won most of the races in my life. I really like the circuit and would now also like to win there with Audi. A year ago, we were on pole but unfortunately there was no real race. Our Japanese fans are important to me and we?d like to show them a great performance this year. The battle with Toyota and Porsche is promising.?

The Audi drivers at Fuji

André Lotterer about the track at Fuji

?Fuji is a track I?m intimately familiar with from the many years of my career in Japan. It has many extremes. The start-finish straight is one of the longest ones on the calendar. Good top speed, in other words low aerodynamic downforce, is crucial there. A narrow right-hand turn follows. The middle section of the circuit then poses a challenge. There is a 180-degree Omega-shaped turn called 100 R. However, due to the large radius we reach a speed of more than 200 km/h at the apex. Good downforce is important there. You should accelerate early out of the subsequent left-hand hairpin in order to gain time. It is followed by a straight containing two slight right-hand turns. When the tarmac is dry we run flat-out there. The last section of the track is very narrow. Here, maximum downforce is crucial. We drive mainly in second and third gear. Due to the track?s encircled location in the mountains at an elevation of 600 meters the weather can be unpredictable.?

Thomas holds on to lead after third round of ZOZO CHAMPIONSHIP