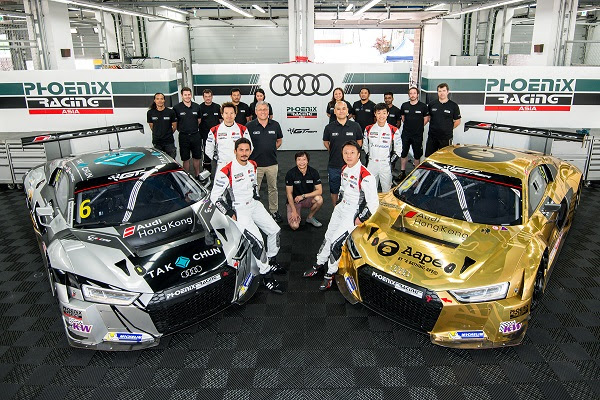 In yet another busy weekend for the Audi R8 LMS Cup drivers, Marchy Lee, Shaun Thong, Alex Yoong and Alex Au will race with Phoenix Racing Asia in Rounds 3 and 4 of the GT Asia Series at the Chang International Circuit in Buriram, Thailand on June 11 and 12.

2016 marks the GT Asia Series debut of Phoenix Racing Asia, the newly established division of the experienced German team of Ernst Moser, which is quickly building a strong foundation in Asia. The team has also joined the 2016 season of the Audi R8 LMS Cup as an official service partner.

Along with claiming pole in Round 2, the team of Lee and Thong finished fourth and fifth in the first race weekend at the Korea International Circuit, and are currently ranked third in the GT3 category with 19 points, while the entry of Yoong and Au stands fifth.

“Phoenix Racing has a rich history with the German Touring Car Championship (DTM) and has won leading GT races at the Nürburgring and Spa 24 Hours. They have brought their renowned expertise from Europe to Asia” said Lee, who is a shareholder of the new Asian company of Phoenix Racing. He added: “As the only team racing with Audi in the 2016 GT Asia season, we are all working towards our first win this year. As part owner of the team, this is a learning experience for me. Shaun and I need to think strategically about how two drivers can best work with one car. Alex Yoong and Alex Au are also a perfect match in the second car as they are very similar drivers – they work carefully based on the data and set-up of the cars. With this Audi line-up, the goal is definitely to win a race this weekend.”

Rene Koneberg, Director of Audi Sport customer racing Asia, said: “With Phoenix Racing Asia on board, we are expecting a strong performance from the Audi drivers and the team in the GT Asia Series this season. The action packed first race weekend in Korea has already shown that this is going to be a strong battle. We wish our drivers the best of luck.”