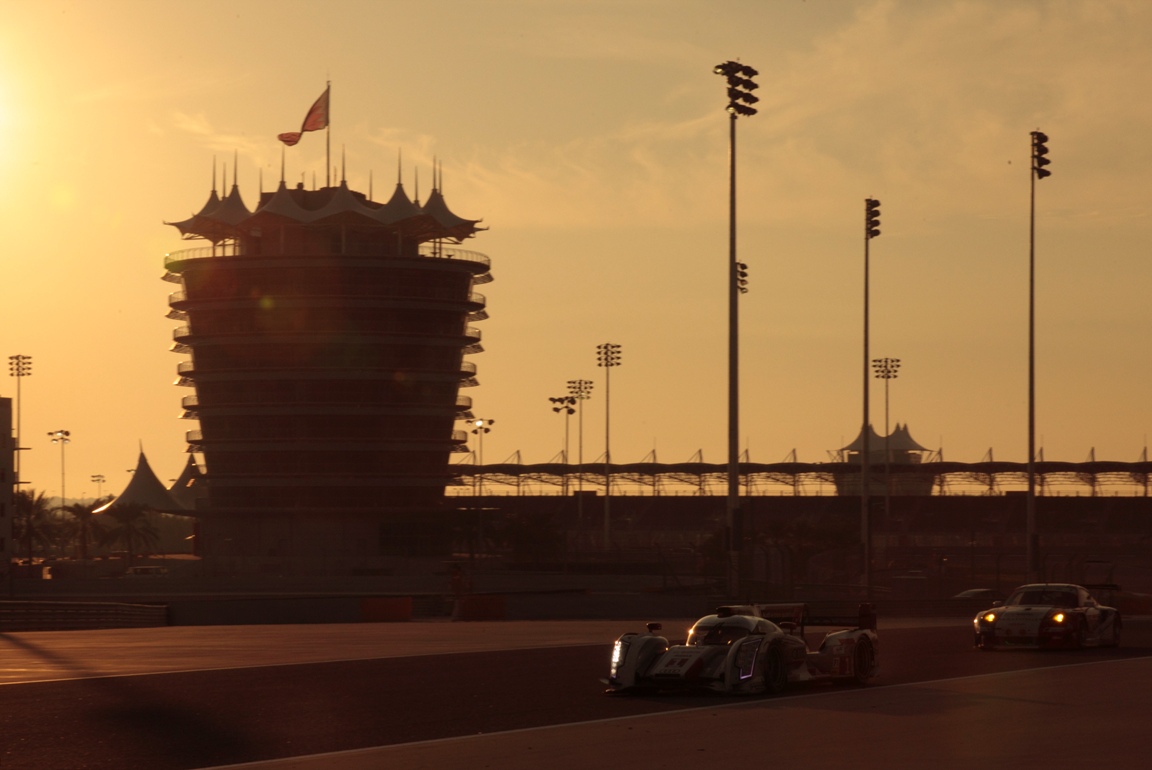 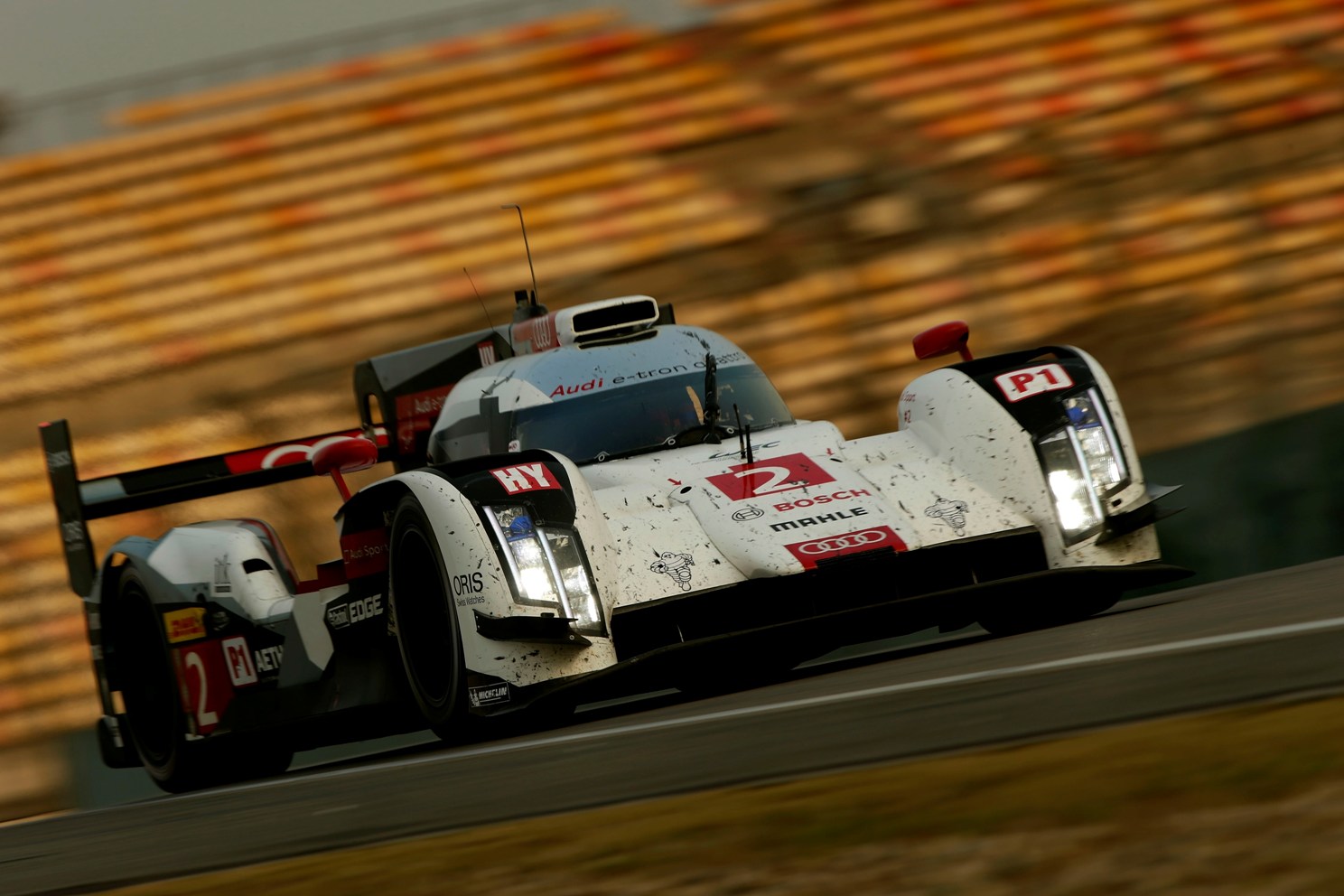 The FIA World Endurance Championship (WEC) is turning onto the finish straight. Only 13 days after the race in China, round seven of the season follows in Bahrain on Saturday, November 15, and two weeks later, the finale is on the calendar. After taking victory on the Persian Gulf in 2012 and second place last year, Audi is again setting its sights on a podium position.

The conditions in the penultimate Championship round are unique. The FIA WEC does not run in the desert at any other event. The sand on the high-grip tarmac often changes the grip conditions from one turn to the other. In addition, major temperature differences are expected, as the race starts in the afternoon heat at 15.00 and ends at 21.00, long after sunset. This confronts the engineers with the challenging task of setting up the Audi R18 e-tron quattro for these contrasting conditions and developing the optimum tire strategy. But the air temperatures, as well as driving into the dark, put a major strain on the drivers too, which demands maximum concentration.

The track configuration of the Bahrain International Circuit poses a challenge as well. At the end of several long straights, the race drivers have to brake particularly hard, as the straights are typically followed by very tight turns. The few high-speed cornering sections on the other hand require good aerodynamic downforce.

In 2012 and 2013, Audi won the drivers? and manufacturers? classifications in the FIA World Endurance Championship (WEC) early. However, in contrast to recent years, the brand with the four rings, since the race at Fuji four weeks ago, has not been the hunted but the hunter. In second place of the manufacturers? standings, Audi is trailing Toyota by 29 points and 88 points in total are yet to be awarded in the two remaining races. In the drivers? standings, Audi?s Le Mans winners, Marcel Fässler/André Lotterer/Benoît Tréluyer, are trailing the Toyota drivers Anthony Davidson and Sébastien Buemi by 42 points. In this classification, 52 points are still up for grabs before the end of the season. Audi will leave no stone unturned to keep the title decision open until the finale.

In Germany, fans can watch the final stages of the WEC race in Bahrain live on Saturday, November 15, from 17.00 to 19.00 on the TV channel Eurosport. Audi will be providing reports about all practice and qualifying sessions and the race on Facebook (AudiSport), Twitter (@Audi__Sport), and a news ticker at www.audi-motorsport.info and on the Audi Sport App.

? Will Audi be able to again finish on the podium in Bahrain as in the past two years?
? Will Audi manage to keep the title decision open up to the finale?
? What team will do the most efficient job of handling the tires in the heat of Bahrain?

Dr. Wolfgang Ullrich (Head of Audi Motorsport): ?The battle for the title in the FIA World Endurance Championship is entering the final stage. Our aim is to postpone the decision once more. In Bahrain, the conditions are very special as a result of the location in the desert, the climate and the track configuration with its long straights and many turns. In the past two years, we were competitive there but this year other conditions apply. We?re going to leave no stone unturned to show a strong performance in spite of this.?

Chris Reinke (Head of LMP): ?Two years ago, we won in Bahrain, last year we finished as the runners-up ? so we?ve still got some unfinished business. We?re not going to give up on the World Championship as long as there?s still a mathematical possibility of clinching victory. We?re determined to deliver another clean team performance and to drive a good race.?

Ralf Jüttner (Team Director Audi Sport Team Joest): ?We?re set on achieving a better result in Bahrain than in the past two WEC rounds. The track configuration doesn?t exactly suit us well, but we?re expecting completely different temperatures than we most recently had in Japan and in China. In heat, we should have an advantage with our tire management.?

Lucas di Grassi (30/BR), Audi R18 e-tron quattro #1 (Audi Sport Team Joest)
-Competed in a Triathlon event in Dubai a week before the race
?I expect us to be a little better in Bahrain than we were in the past two races, as the temperatures should be helping us with respect to using the tires. Still, there?s no doubt about the race becoming a very tough one. I haven?t driven there in a long time but know that the track and the entire facility are first-rate. The long straights and the hard braking stages are special characteristics of this track. Of course we?d like to continue to postpone the decision in the manufacturers? standings.?

Loïc Duval (32/F), Audi R18 e-tron quattro #1 (Audi Sport Team Joest)
-Drove in Bahrain for the first time last year in a WEC event
?I really like the track. It offers good overtaking opportunities and in the winter months, I look forward to a race in bright sunshine even though the strains will no doubt be great. The circuit is located in the middle of the desert. Sand is often blown onto the track, which makes the conditions more difficult. This race is simply very special.?

Tom Kristensen (47/DK), Audi R18 e-tron quattro #1 (Audi Sport Team Joest)
-Traveled to Bahrain as the brand new World Champion last year
?The track has a few surprises. The vertical differences of the various track sections are greater than you?d think. The tarmac causes heavy tire wear. But when sand is blown onto the track, grip clearly degrades. Finding the best compromise between traction, acceleration, top speed and aggressive braking is crucial. In the fast second sector, aerodynamic downforce plays a major role as well, plus there?s another factor: we?re starting during the day and will be driving into the night, which makes for significant temperature differences.?

Marcel Fässler (38/CH), Audi R18 e-tron quattro #2 (Audi Sport Team Joest)
-In 2012, with André Lotterer and Benoît Tréluyer, was the first WEC winner in Bahrain
?Bahrain is a special race because the heat there is simply unusual for the cars and the drivers, plus there?s the sand. The track conditions constantly change. As long as we?ve still got a chance of winning the World Championship title, we?re going to battle for it.?

André Lotterer (32/D), Audi R18 e-tron quattro #2 (Audi Sport Team Joest)
-Is competing in Bahrain for the third time
?The round in Bahrain is a nice event. The race will be anything but easy, but we?re prepared. The heat is unusual, so we?re going to try and be as fit as possible. Two years ago, we managed to clinch victory there.?

Benoît Tréluyer (37/F), Audi R18 e-tron quattro #2 (Audi Sport Team Joest)
-Has come to appreciate the race in the desert state
?This next race is a challenge. The heat in the desert and the sand on track make special demands on us. It?s not easy to optimally set up the car for these track conditions. From the past two years we know that the WEC receives a warm welcome in Bahrain. We?re looking forward to this atmosphere.?

The Audi drivers in Bahrain

Marcel Fässler about the track in Bahrain

?The location of the circuit is unusual because it is surrounded by desert. The sequence of very long straights and tight turns in which we have to shift down into second or in several cases even first gear, makes for a start-stop rhythm. There are only two combinations of corners that we drive through in fourth or fifth gear. There, we notably profit from the downforce generated by the Audi R18 e-tron quattro. However, the slow sections should not be underrated either. For instance, there is a left-hand bend in front of the back-straight where we brake at the beginning of a downhill track section. The left front wheels tend to slightly lock there. The penultimate right-hand corner calls for good judgment as well because it allows many different lines.?