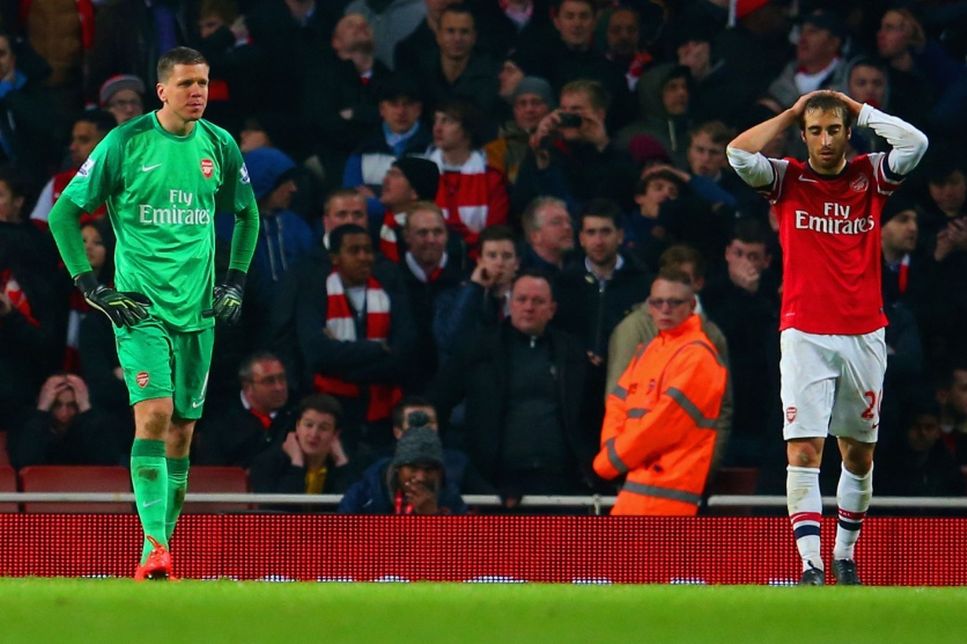 Arsenal manager Arsene Wenger all but conceded the Premier League title to leaders Chelsea after seeing his side let slip a one-goal lead in a 2-1 loss away to Swansea on Sunday.

There might be more than two-thirds of the season left and the small matter of 81 points to play for, but Wenger believes Arsenal’s London rivals are unstoppable.

“At the moment Chelsea are on course for 100 points this season,” said Wenger, who won the last of his three Premier League title as Gunners boss during the 2003/04 season.

“If you look at the number of points they have today, if they keep that up nobody will catch them, that’s for sure,” the Frenchman added.

“There doesn’t look to be anybody capable to challenge them at the moment.”

Having relinquished a three-goal lead at home to Anderlecht during a 3-3 Champions League in midweek, the Gunners’ defensive frailties were on display again in south Wales.

“I think it’s a game that we were quite in control of at 1-0,” Wenger said. “But I felt that we allowed them back into the game by losing some challenges in the middle of the park. You cannot afford to lose them.

“It’s unfortunate to lose a game like that but we were not rigorous until the end.

“We produced quite a decent performance for 75 minutes but you have to last for 90 minutes. It’s disappointing but we have to take it on the chin.

“But give Swansea credit…Swansea are a good team.”

“I don’t know how much damaging it is, but we had an opportunity to come back into the top four.”

Swansea manager Garry Monk was understandably delighted with a victory that saw his side leapfrog Arsenal into fifth place.

“We had some unfortunate injuries in the week, but I have belief in the squad and it takes a squad not just 11 players,” Monk said.

“I think we saw again today that we have that inner belief and mentality. It was certainly what carried us through today.

“When we were 1-0 down, I was thinking what we could do. I felt we had the crowd with us and when we got the equaliser, I thought we needed to seize the initiative. That was why I put Bafe on.

“We prepared for the best Arsenal side today and we understood just how much they can hurt you, at any moment,” Monk added.

“I know they suffered in midweek but they are capable of upping it at any moment. But the way we worked was outstanding.

“Of course, we are very happy going into the international break. We have had a tough time, but it was crucial we took points from our last two games.

“We won’t always get it right but we have to make sure that we stay in games right until the very end.” – Agence France-Presse