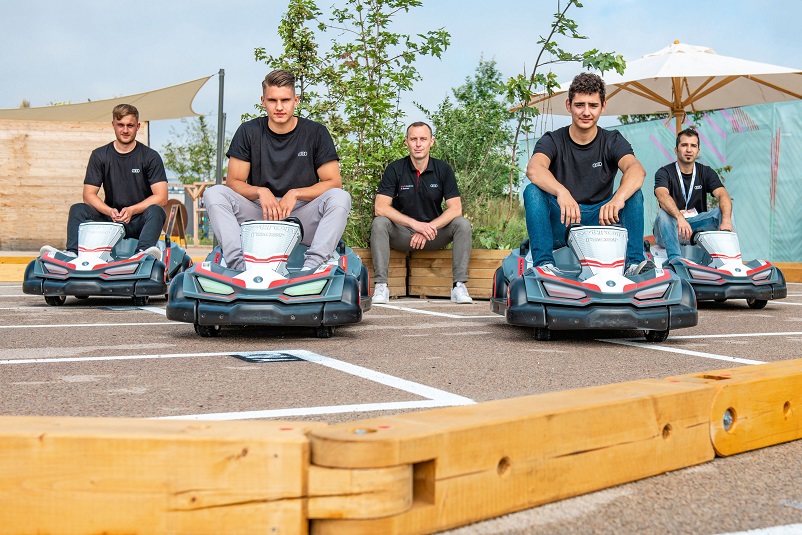 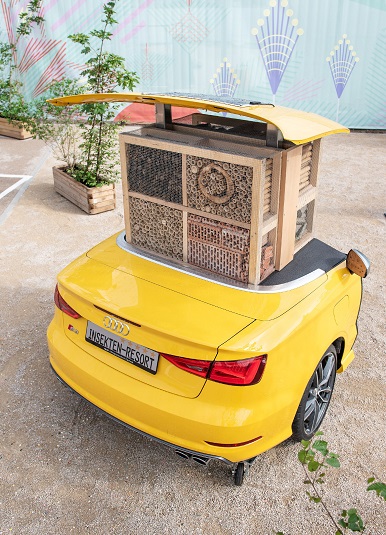 For almost two years, vocational trainees at Audi have been planning, bolting, cutting, and building for the State Garden Show in Ingolstadt (from April 21 to October 3, 2021) – entirely on their own and in a very environmentally conscious manner.

The results of their efforts include a grassy, child-friendly race track for electric go-karts, an insect hotel in a bright yellow Audi, an environmental wheel of fortune on a rim, and the Audi eKart designed and built by trainees themselves out of used material components.

“Plan, build, and present a race track related to the following themes: the environment, sustainability, and skills for children and teenagers.” This was the assignment given to trainees by the head of training in November 2019 for a project at the State Garden Show in Ingolstadt. From the very beginning, the entire project – from idea to concept to implementation – was completely in the hands of Audi’s trainees.

The mere process of planning, coordinating, and organizing the project was extremely demanding because at times the team included more than a dozen young people from different training programs, including business, automotive mechatronics, bodywork and vehicle construction, toolmaking, painting, and IT.

The results are as much worth seeing as they are forward-looking. The trainees will present them at the State Garden Show in Ingolstadt during three different periods of time from the end of July to the end of August 2021 (from July 26 to 28, August 2 to 4, and August 23 to 26, respectively).

Everyone involved is particularly proud of the Audi eKart that two trainees, Daniel Hiesch and Emre Akkurt – who have since completed their training and work for the company as automotive mechatronics engineers – built as part of the project. Rahel Frey, a professional race car driver for Audi Sport, has already tested the Audi eKart – which can hit speeds of up to 140 kilometers per hour and has a range of 100 kilometers – on a race track, saying: “Impressive, thanks for the opportunity!” (link: https://www.audi-communications.com/audi/rd/email/0001/20210728090255/dbea965f2e28c4f525e19f96856637fd)

The two designers are also satisfied: “Everything just worked out perfectly,” said Akkurt. Indeed, their electric-powered go-kart is not only sustainably made from recycled material – including a used cell module from an Audi e-tron – but is also extremely fast and maneuverable.

The design and construction of the race track, which has a diameter of 90 meters, was no less complex. This is where kids (aged 4 to 10) get to drive the eKart’s “little sibling,” the Audi e-tron Racer. In these go-karts, the engine’s speed has been reduced to match the young drivers, making the vehicles particularly easy and safe to drive. 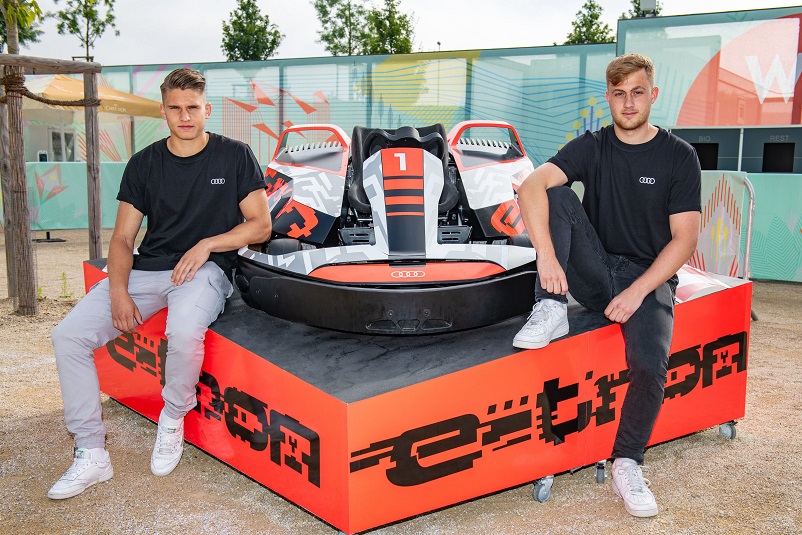 The “big sibling,” the super-fast eKart built by the trainees themselves, will also be on display and can be admired at the booth.

The track is planted with young oaks, ash trees, beech trees, and alders, which will continue to grow in a different place after the event. Together with the Audi Environmental Foundation, the trainees have already planned a project to reforest native forests.

The trainees scheduled early and late shifts to present the race track at the event over a period of several weeks, planned out its design with plants and wooden borders, and coordinated its transportation and construction on their own. To ensure that the children can also learn something and win something before or after their ride in the Audi e-tron Racer, the trainees built a wheel of fortune from a rim.

“Organizing the shift system was a complex process,” reported Lucas Papke, who is in his first year of training as an automotive mechatronics technician. After all, seven trainees will be busy at the event in two shifts each day for a total of nine days of activities over a period of several weeks – on some days from six in the morning to six in the evening. Nevertheless, he summed things up as follows: “The entire project has been a lot of fun.”

The project’s second second-life product – an insect hotel in a bright yellow Audi S3 – is also drawing admiring comments. To build it, the trainees split an old model down the middle and cut it apart, took out the sharp objects, installed a large block of wood, and put a yellow hood on the new insect habitat.

A solar power system is also built into this roof to independently power the rear lights of the insect hotel. The trainees developed the electronics and software for the lighting system themselves. “It’s already turned out great,” commented one of the people involved, Nico Swiontek, who is in his second year of training as a bodywork and vehicle construction mechanic.

Similarly, the trainers have nothing but praise for the trainees. “The results of the project are outstanding,” said Matthias Beck, head of automotive technology training. He highlighted the wealth of ideas and the initiative on the part of Audi’s trainees in designing the race track, because as he explained, the trainees planned and managed the entire concept of teaching children about e-mobility, sustainability, and biodiversity all by themselves.

The trainees also worked long hours on the project with extraordinary dedication in addition to their usual duties: “We’re exemplifying our commitment to social and environmental causes – and doing so with tremendous team spirit,” praised trainer Thomas Seemann. “Overall, the results are outstanding. Kudos!”