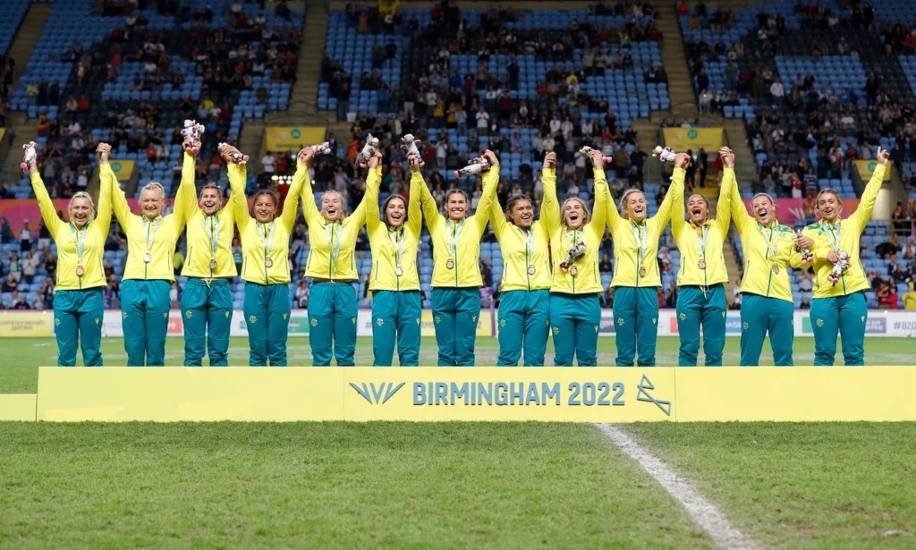 There were new names on the Commonwealth Games rugby sevens winners board as Australia and South Africa won gold for the first time in the women’s and men’s competitions respectively.

Australia raced into a 17-0 halftime lead against Fiji in the women’s final and despite a spirited fightback from Fijiana, Australia ran out eventual 22-12 winners to add Commonwealth Games gold to their Rio 2016 Olympic triumph and HSBC World Rugby Sevens Series 2022 title.

Faith Nathan ran in a pair of tries alongside scores from Madison Ashby and Maddison Levi to secure gold for Australia.

Australia’s Sharni Williams was delighted with the win: “It hasn’t really sunk in for me. I think the win over New Zealand was huge for us. Going into this…it was about that belief and figuring out that we weren’t just about that last game against Fiji.

“We believe in each other, we’ve done the work and we’ve fought through Covid. You know what’s expected. We have that accountability and whatever comes our way we deal with together.”

The men’s final was a one-sided affair as South Africa dominated from the start to take a 24-0 lead over Fiji thanks to tries from tournament top scorer Angelo Davids, JC Pretorius, Shaun Williams and Muller du Plessis before Waisea Naqucu replied for Fiji, but Mfundo Ndhlovu ran in a fifth try for South Africa at the death to seal a comprehensive 31-7 victory.

South Africa coach Neil Powell said: “It was an amazing performance from the guys. I’m really happy for the team that they got their reward for all the hard work they’ve put in over the last weeks before we came over to England. They are a great bunch of guys who fight for each other, for the team and for the system and I’m very proud of them.

“It was great to play in front of a full capacity and an amazing atmosphere here. We’ve got two big tournaments coming up including the Rugby World Cup Sevens in Cape Town where we will have 55,000 people in the stadium with the same energy and hopefully the result will be the same.”

New Zealand were unable to repeat their double gold medal success from Gold Coast 2018 and had to settle for bronze in both the women’s and men’s events in Coventry.

The Black Ferns overcame a spirited Canada 19-12 while the All Blacks Sevens, who had won gold at five of the previous six Commonwealth Games, beat Australia 26-12 in a hotly contested men’s bronze medal match.

Earlier in the day there was late drama in the men’s semi-finals as Fiji produced a stunning comeback to triumph 19-14 over New Zealand with a golden score in extra time thanks to a try from captain  Waisea Nacuqu who ran the length of the field to touch down in the corner and send the crowd into raptures.

Australia scored first in their semi-final against South Africa but a hattrick of tries from the tournament’s top scorer Angelo Davids – his third hattrick of the competition – and a superb individual effort from Selvyn Davids ensured the Blitzboks ran out 24-12 winners to book their place in the final.

Hosts England finished on a high with a pair of victories for both the men’s and women’s teams on Sunday. The men beat neighbours Wales 14-10 before a 31-17 victory over an impressive Uganda to secure ninth position.

World Rugby Chairman Sir Bill Beaumont said: “We have had three fantastic days of scintillating, world class rugby sevens in front of huge crowds at Coventry Stadium in what has been another superb showcase for the sport.

“The standard of rugby has been exceptional and congratulations to the medallists who will cherish this moment for years to come. We pay tribute to the Birmingham 2022 organisers for putting on an excellent event in a vibrant stadium and a special thank you to the thousands of volunteers who are the heart of the Games.

“The future of sevens is very bright and we now look forward to an exciting climax to the men’s HSBC World Rugby Sevens Series 2022 in Los Angeles in August, followed by the highly anticipated Rugby World Cup Sevens in Cape Town on 9-11 September, involving 40 of the best teams from across the globe.” – WORLD RUGBY