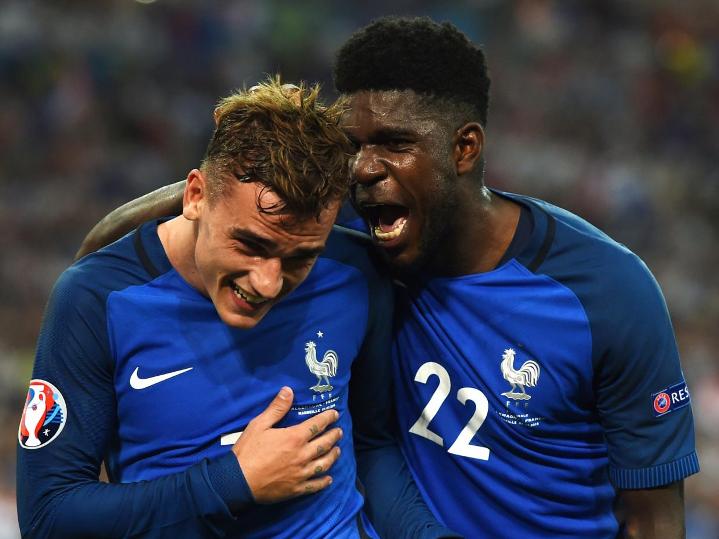 In the space of 10 giddy days, 22-year-old Samuel Umtiti has gone from uncapped Lyon defender to big-money Barcelona signing and likely France starter in a European Championship final.

Drafted in as an injury replacement, Umtiti was still waiting for his first appearance at Euro 2016 when Barcelona announced on June 30 that they had agreed to sign him from Lyon for 25 million euros ($26.7 million).

He made his France debut against Iceland three days later and having then impressed in the 2-0 semi-final win over Germany, Umtiti is expected to line up against Cristiano Ronaldo’s Portugal in Sunday’s final.

“I’m not surprised by Sam. What he’s doing with us is what he was doing before,” France coach Didier Deschamps told journalists at Stade de France on Saturday.

“He knows I have confidence in him. Some players aren’t mature at 30, some are mature at 20 — he’s in the latter category.

Umtiti was only called up by Deschamps due to a calf injury sustained by Jeremy Mathieu, who will ironically be one of his rivals for a place alongside Gerard Pique in the heart of Barcelona’s defence next season.

The Cameroon-born youngster did not play a minute of France’s first four games at the tournament, but a suspension to Adil Rami opened the door ahead of the last 16 meeting with Iceland at Stade de France.

Preferred to the more experienced Eliaquim Mangala, Umtiti looked understandably nervous and was at fault for Iceland’s first goal, although he completed 100 percent of his passes in France’s 5-2 win.

In a major show of faith, Deschamps kept Umtiti in the starting XI against Germany despite Rami’s return and he produced a far more assured display that dazzled France’s former defensive lynchpin Lilian Thuram.

“Congratulations, you blew me away!” Thuram told Umtiti in a post-match encounter at Marseille’s Stade Velodrome that was caught on camera by French television channel TF1. “Always stay this calm!”

Umtiti’s calmness was his calling card during his speedy progression through the Lyon youth ranks and it was the confidence and accuracy of his passing that are thought to have seduced Barcelona.

Having made his Lyon debut aged 18 in January 2012, he was appointed vice-captain last season and will leave France with 131 Ligue 1 appearances under his belt.

“He’s sure of his ability, which is important,” says France goalkeeper Hugo Lloris, who played with Umtiti in his final season at Lyon before joining Tottenham Hotspur.

“There’s confidence within the team, too. This environment and confidence allows him to feel good and show all his ability.

“He’s very strong in the challenge and very good at playing the ball out from the back, which marks him out.

“The hardest bit is yet to come, but he has a good head on his shoulders and that’s essential.”

Born in Yaounde, the youngest of four children, Umtiti spent the first two years of his life in Cameroon before moving to Lyon with his family.

Despite frequent overtures from the Cameroon Football Federation — including approaches from one of the country’s greatest players, Roger Milla — Umtiti chose to represent France at youth level.

He was a member of the France team that triumphed at the Under-20 World Cup in 2013.

“I still have family in Yaounde who I often speak to on the phone, but I have no memories of my two years in Cameroon,” Umtiti told France Football magazine in March.

“I’ve been twice. It’s part of my roots. The federation asked me several times to play for Cameroon. My advisers met Roger Milla at his request, out of politeness.

“They listened to his arguments, but nothing worked. My choice had already been made. Since the start, I wanted ‘Les Bleus’.” – Agence France-Presse