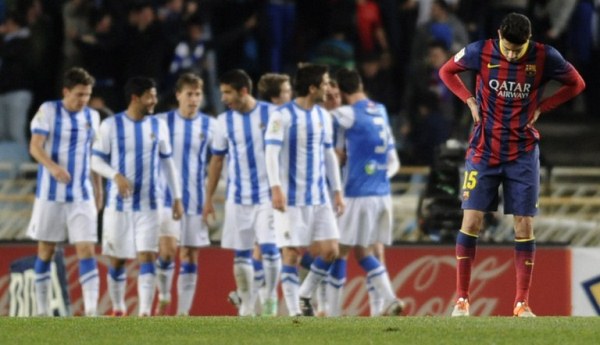 BARCELONA coach Gerardo Martino took responsibility for a failed tactical experiment as his side suffered a 3-1 defeat away to Real Sociedad to fall three points behind Real Madrid at the top of La Liga.

Martino started with former Arsenal midfielder Alex Song in an unfamiliar role in a back three alongside Gerard Pique and Marc Bartra.

“Losing and ceding ground in the league always hurts, but we will have another chance next weekend and we will continue to fight until the end,” said Martino.

“The opponent played very well, they were better than us. The lesson we learned was that our response didn’t match up to what was expected of us today.

“The idea was, thinking a bit about (Carlos) Vela and Griezmann as two forwards, to play with three at the back with Busquets in front and the two fullbacks pushing forward.

“In the end it was the positioning of (Sergio) Canales that caused us problems because they ended up in a diamond and he was running off the back of Busquets.”

Real Madrid now lead Barcelona after both sides have played the same number of games for the first time this season as they beat Elche 3-0 at the Santiago Bernabeu.

Asier Illarramendi and Isco scored either side of Gareth Bale’s 35m stunner to hand Real a 15th win in 16 games in all competitions.

Barca could even end the weekend in third place should Atletico Madrid avoid defeat away to Osasuna.