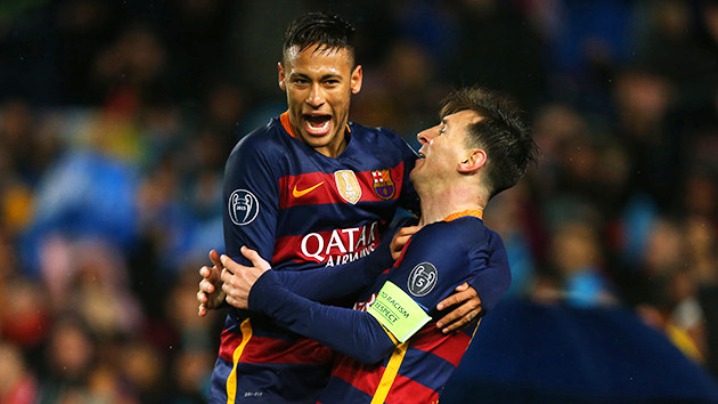 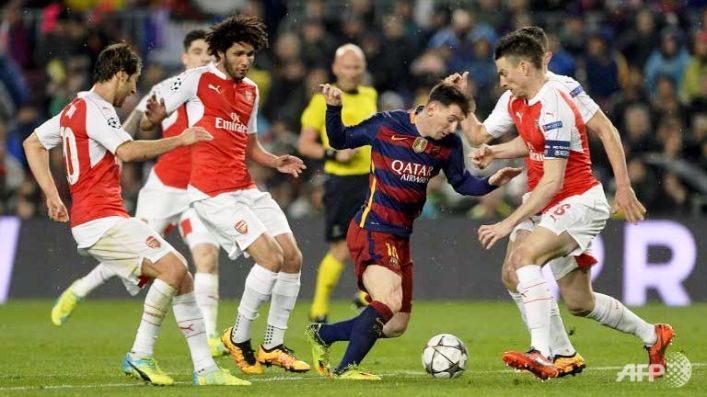 Neymar, Lionel Messi and Luis Suarez were all on target as Barcelona piled more pressure on under-fire Arsenal boss Arsene Wenger by easing into the Champions League quarter-finals 5-1 on aggregate with a 3-1 win at the Camp Nou on Wednesday.

Neymar’s early strike appeared to erase any forlorn hopes of an Arsenal comeback, but the visitors were handed a lifeline when Mohamed Elneny drilled into the top corner just after half-time.

Suarez put the tie beyond Wenger’s men in emphatic fashion with a stunning volley 25 minutes from time before Messi’s cheeky chipped finish rounded off the scoring late on.

“I don’t know with what I hit the ball, but the most important thing is it went in,” said Suarez.

“It was the moment in which they were attacking us. After they scored they grew in confidence, but we got back in front and back in control of the game.”

By contrast, one win in eight games has decimated Arsenal’s hopes of silverware this season as they exit the competition at the last 16 stage for the sixth consecutive season days after relinquishing their two-year hold on the FA Cup.

“I have to say we played against a team with the best strikers I’ve seen,” said Wenger.

“The three are exceptional and from nothing they can create a chance.

“We have to admire art and they have two or three players that transform normal life into art.”

After a bright start from Arsenal, Barca’s front three soon came to life and David Ospina made a brilliant save from Messi after the Argentine had perfectly controlled Neymar’s floated pass over the Arsenal defence.

Jeremy Mathieu headed over a gilt-edged chance from the resulting corner.

Neymar wasn’t so forgiving moments later when he was played in by Suarez and coolly slotted past Ospina for his 26th goal of the season.

Yet, Arsenal should have been at least level by the break as Barca struggled to handle the visitors pace on the break without the suspended Gerard Pique.

Alexis Sanchez missed a glorious chance to net on his return to the Camp Nou when he glanced a header wide from Hector Bellerin’s cross.

Danny Welbeck then sliced well wide when clean through on goal, whilst Alex Iwobi appealed in vein for a penalty after clipping his own ankles inside the box.

Arsenal’s pressure was finally rewarded six minutes into the second-half when Elneny rifled his first goal for the club into the top corner from Sanchez’s layoff.

Conceding a goal sparked Barca back into life as Ospina got down well to his left to parry Messi’s low drive.

Welbeck had another chance to put Arsenal right back in the tie when he pounced on a poor header from Mathieu, but saw his shot blocked by Javier Mascherano’s brilliant last-ditch tackle.

Barca’s nerves were settled in spectacular fashion by Suarez as the Uruguayan contorted his body to acrobatically volley home Dani Alves’s cross.

Arsenal continued to create chances as Welbeck drilled a shot against the bar from a narrow angle.

Marc-Andre ter Stegen then produced a brilliant double save to turn away Sanchez’s free-kick and Olivier Giroud’s follow-up effort.

However, Messi again demonstrated the difference in quality between the sides in front of goal when he dinked home two minutes from time to take he, Neymar and Suarez’s combined tally for the season to 106.

Champions League quarter-finalists (draw to be made on Friday at 1100GMT):