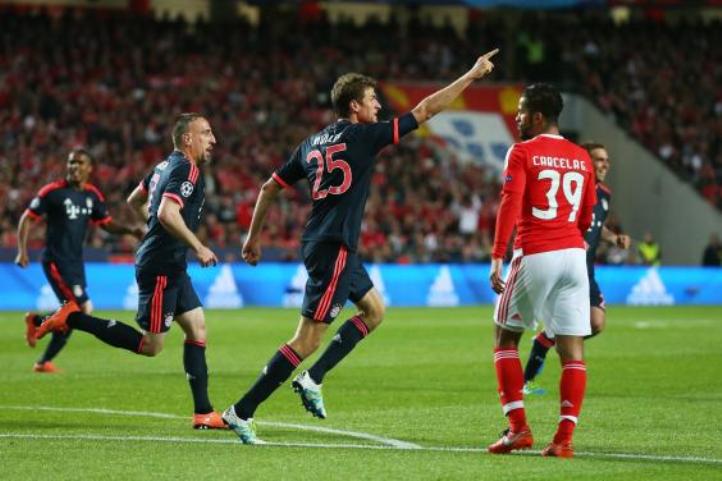 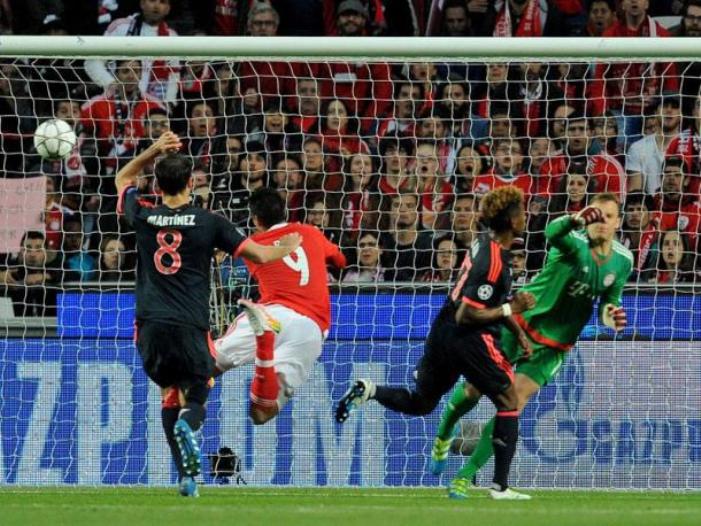 Bayern Munich came out on top in an entertaining Champions League last-eight clash with Benfica, reaching the semi-finals with a 3-2 aggregate victory, after a second-leg 2-2 draw in Lisbon on Wednesday.

Pep Guardiola took his German champions to the Estadio Da Luz with a 1-0 first-leg lead thanks to Aruto Vidal’s early strike at the Allianz Arena last week.

After a slow start to the game, Benfica drew back onto level terms in the tie in the 27th minute, as Raul Jimenez escaped the Bayern defence to nod past Manuel Neuer.

The tie appeared all but over shortly after the restart when Thomas Mueller pounced in trademark fashion.

Benfica did manage to create a grandstand finale of sorts through Talisca’s set-piece, but it could have been more exciting had Bayern’s Javi Martinez been sent off for the cynical foul that lead to the free-kick.

Bayern though join Real Madrid, Atletico Madrid and Manchester City in Friday’s semi-final draw, as coach Guardiola looks to sign off with a treble of Champions League, Bundesliga and German Cup titles before he joins Man City at the end of the season.

“We’re satisfied because the Champions League is a very tough competition. We’ve achieved our objective and now we want to get to the final,” said Guardiola, who has now reached the semi-finals in all seven of his campaigns as a coach.

“From what I read in Germany it would seem that if I leave without winning the Champions League my work will have been incomplete.

“But for us, the coaches, the aim is always to win trophies.”

Five-time winners Bayern progress to the last four for the sixth time in the last seven seasons, leaving their opponents without a semi-final appearance in Europe’s premier club competition since 1990.

Benfica were undisputed underdogs, and they started this match not just with a deficit to overturn, but without three key forwards.

Top scorer Jonas, who has scored 32 goals this season, was ruled out through suspension, while Nicolas Gaitan and Greek Kostas Mitroglou failed to recover from injuries, meaning that the hosts had depleted attacking options to choose from.

“We finished the game with five players aged between 18 and 21 on the field. We have a team that fought toe to toe with Bayern,” said coach Vitoria.

“We were up against a very strong team who score goals wherever they play and that made the difference.”

Roared on by the home crowd, the hosts started quickly and after Vidal headed tamely at Ederson Moraes, Benfica struck almost from nowhere.

Eliseu skipped forward from left-back, before chipping in a delicious cross which was headed home by Jimenez for his third Champions League goal of the season.

Bayern were rocked and Jimenez should have put Benfica in front on aggregate just a couple of minutes after opening the scoring but the former Atletico Madrid man stabbed a weak effort straight at Neuer.

Just when the Portuguese champions were starting to gain a measure of control, Lahm’s cross was only palmed as far as Vidal by stand-in goalkeeper Ederson, and the Chilean did the rest with a thumping left-footed finish.

World Cup winner Mueller struck in the 53rd minute after Martinez headed Xabi Alonso’s corner across the face of goal, to effectively seal Bayern’s place in the semi-finals with his eighth goal in Europe this term.

The Bavarians were given a huge slice of luck when Martinez hacked down Benfica substitute Goncalo Guedes when the teenager was clean through on goal, but only saw yellow.

Brazilian Talisca, who had also come off the bench, delightfully curled the resulting free-kick out of Neuer’s reach and into the top corner to give Benfica a glimmer of hope, but in the end they ran out of steam. – Agence France-Presse