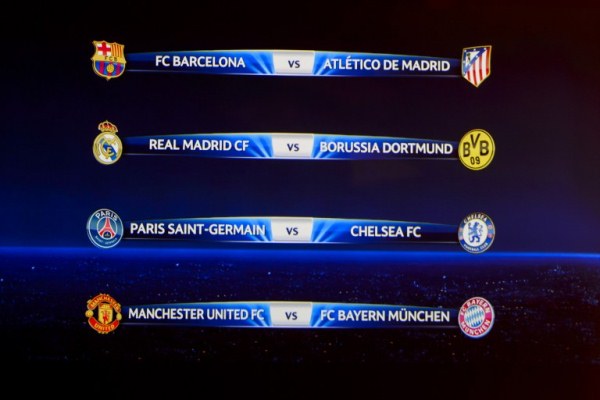 DEFENDING champions Bayern Munich drew Manchester United in a repeat of the classic 1999 Champions League final as a star-studded quarterfinal draw was made in Nyon today.

Four-time champions Barcelona will play the first leg at the Nou Camp against La Liga rivals Atletico Madrid in an all-Spanish blockbuster while Chelsea tackle Paris Saint-Germain with the first leg in the French capital.

Runaway Bundesliga leaders Bayern will relish the chance of taking on a United side that snatched a 2-1 victory from the jaws of defeat in the 1999 Barcelona-hosted final.

United, meanwhile, have seen a stuttering season under new coach David Moyes, burst into life earlier this week when they defeated Olympiakos 3-0 to set up the Bayern match.

With United 12 points behind Manchester City and the fourth and final Champions League spot in the Premier League, winning the competition maybe their most realistic chance of qualifying as winners.

The first leg will be played at Old Trafford.

“What an exciting tie – a repeat of the 1999 Cup Final so everyone will be looking forward to the challenge it presents,” said Manchester United general secretary John Alexander.

“We will take heart from the performance of the other night (3-0 win over Olympiakos) and I am sure we will be well prepared for the task ahead of us.

“We have a fantastic squad of players and hopefully they can pull it all together on the night.

“If we can do well in the first leg, we’ll certainly have chances in the second leg to get some away goals,” continued Alexander.

“We can’t allow Man Utd’s current position in the Premier League table to affect our mindset for this game,” the veteran German international said.

“We’ll need all our strength but we have a good chance of reaching the semifinals.”

Jose Mourinho’s Chelsea travel to the Parc des Princes to take on big spending PSG although the Portuguese two-time European champion has never lost at the quarterfinal stages.

Chelsea defeated PSG 3-0 in Paris during the 2004-05 group stages while the teams drew 0-0 at Stamford Bridge in the return.

Laurent Blanc’s PSG reached the last eight last season, with Carlo Ancelotti at the helm, before going out against Barcelona on away goals but remain along with Atletico as the two teams in the last eight never to have lifted the European Cup.

For the first time, all eight group winners from the pool round have advanced to this stage of the competition in an explosive quarterfinal line-up.

Cristiano Ronaldo goes into Real’s match against Dortmund with 13 goals, one short of Lionel Messi’s record for Champions League strikes in one season.

The first leg is set for the Santiago Bernabeu as Dortmund were handed a stiff test in their bid to return to the final after losing 2-1 against Bayern at Wembley last May.

However Dortmund will take heart from the fact they knocked out Real last season 4-3 on aggregate in the semi-finals.

“Every game at this stage is going to be difficult, but we just have to be prepared as best as we can. It will take an incredible effort from everyone in the club.”

Argentina’s Messi is on 67 Champions League career goals and just four short of the all-time mark held by Spaniard Raul as Barcelona take on Atletico Madrid.

Atletico are one point ahead of Barcelona in La Liga with Real Madrid a further three clear at the top of the Spanish table.

First leg matches will be played April 1-2 with the return fixtures slated for April 8-9 before the draw for the semifinals on April 11.

The final will be played at Benfica’s Stadium of Light on Saturday May 24.