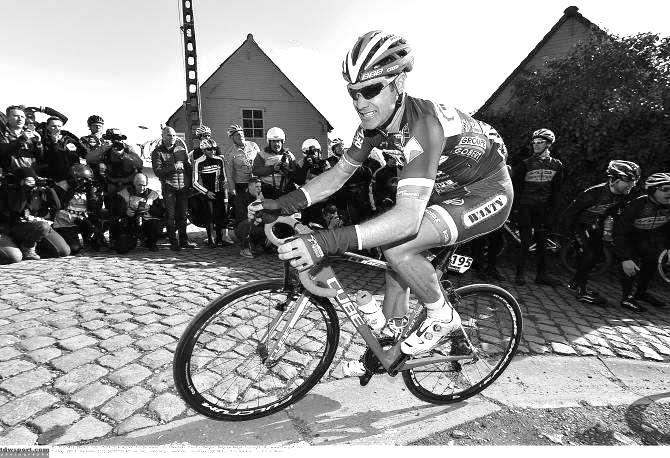 Belgian cyclist Antoine Demoitie has died after he was struck by a motorbike following a fall during the Gent-Wevelgem race in Belgium, police said.

The 25-year-old, a member of Belgium’s Wanty-Gobert team, was involved in a fall along with three other riders around 150 kilometres (90 miles) into the race on Sunday as it lopped briefly out of Belgium into northern France.

He was then hit by a race motorbike while on the ground, before being transported first to Ypres hospital and then being transferred to an intensive care unit at Lille, where he succumbed to his injuries.

“The rider died. An inquiry is under way to determine the circumstances,” Frederic Evrard, spokesman for the Nord-Pas-de-Calais regional gendarmerie in France, said late on Sunday.

A witness quoted by Belgian daily SudPresse said four riders were involved in a fall in front of the motorbike, which “literally fell on top of” Demoitie.

Other witnesses said the Belgian rider was hit on the head.

“His wife and his family are at his side,” the team wrote on Twitter.

The International Association of Professional Cyclists (CPA) said on Monday that they wanted “light to be shed upon the circumstances” of Demoitie’s accident.

“In this moment of grief and sorrow we do not want a debate, but we do feel a lot of frustration,” said CPA president Gianni Bungo.

“We have always maintained that the cyclists’ safety must be first in the discussions of the different key players in cycling.

“We do not want to accuse anyone, but to reflect on the responsibilities of everyone to ensure that attention, awareness and control over safety standards are maintained to a very high level.”

The Gent-Wevelgem cobbled classic lived up to its gruelling reputation on Sunday, with riders battling strong winds as they tackled 10 climbs over a 243 kilometre route.

The race, which includes two ascents of the hills of Kemmelberg, was won by Slovakia’s Peter Sagan.

A number of accidents have struck the sport this year, including the death of young hope Romain Guyot.

The 23-year-old Frenchman died on March 3 when he was hit by a truck at a crossroads in the west of the country.

In January, six racers from the Giant-Alpecin team, including German John Degenkolb and French Warren Barguil, were injured in a collision with a car during a training ride south of Valencia.

In 2011, Demoitie’s compatriot Wouter Weylandt died from injuries suffered in a crash during the third stage of the Giro d’Italia.

On Saturday, 22-year-old Belgian rider Daan Myngheer suffered a heart attack during the Criterium International race in Corsica. He was put on artificial respiration and was said to be in a coma.

An excellent sprinter, particularly in uphill finishes, he won the Tour of Finistere in France in 2014, and was second in the Handzame Classic and GP Stad Zottegam in Belgium in 2015. – Agence France-Presse