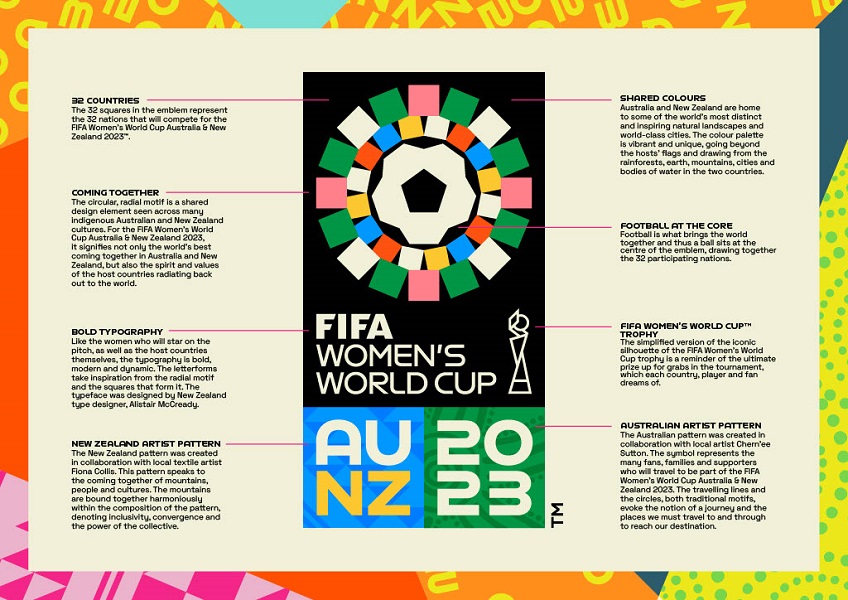 The brand identity and emblem incorporate the vibrant local landscapes and rich colours of the two hosts, building a palette based on the rainforests, earth, mountains, cities, and water of the two countries.

A radial motif featuring 32 colourful squares – celebrating the new expansion to 32 participating nations, and an element commonly seen across the indigenous cultures of Australia and New Zealand – is a prominent part of the design.

The motif symbolises not only the world’s best teams coming together but also the spirit and values of the two host countries radiating back out into the world, with football at its core. Speaking about the new identity for the FIFA Women’s World Cup 2023,

Fatma Samoura, FIFA Secretary-General, said: “Women’s football continues to grow and Beyond Greatness, the new slogan perfectly captures where FIFA wants to take the female game in the hearts and minds of football fans worldwide- Beyond Greatness. The new brand identity beautifully reflects the expansion of the tournament from 24 to 32 teams and evokes the colours and diversity of the national team strips taking part in the ultimate women’s football competition. We can’t wait for it to begin!”

During the show, which was broadcast on Optus Sport in Australia and Sky TV in New Zealand, the guests discussed the meaning behind the ambitious new tournament slogan, the dynamic emblem, and the overall look of the brand, which incorporates unique patterns created in collaboration with local indigenous artists.

Speaking during the show, Sarai Bareman was inspired by the vision behind the brand: “The core purpose of the FIFA Women’s World Cup is to showcase women’s talent. Everything we’re trying to achieve for women in football and women in society will be on display for the world to see in Australia and New Zealand.

“It’s a movement and we want everyone to be part of it. You’re going to see an amazing display of the best athletes in the world, two beautiful countries, and two amazing cultures. It’s unique, like this emblem. It’s unlike anything you’ve seen before. Get behind it!”

In addition to the dramatic visuals, a bespoke sonic identity for the tournament entitled Unity, created by renowned electronic musician and producer Kelly Lee Owens, was unveiled.

Owens, who made a special guest appearance during the broadcast, explained that the music was inspired by the same ideals and values that lead to the creation of the Official Slogan: Beyond Greatness™.

FIFA Women’s World Cup 2023 CEO Dave Beeche noted that the launch of the brand is a meaningful milestone in the tournament’s preparations: “Unveiling this dynamic and innovative brand is a key milestone for the host countries in the journey to 2023. We are proud to see our Māori and Indigenous Australian cultures play a key role in the creation of this powerful and unique global brand. We believe it’s a fitting symbol of our plans to deliver a tournament that will not only take players and fans Beyond Greatness but continue the incredible momentum already underway in the growth of women’s sport and gender equality. Australians and New Zealanders are looking forward to extending our famous ‘down-under’ hospitality to all visitors, to celebrate the world’s biggest female sporting event in our beautiful countries.“

The FIFA Women’s World Cup 2023 will see the world’s top players compete for the greatest prize in women’s football from 20 July to 20 August 2023. The expanded format will feature 32 teams for the first time and is the first to feature hosts from two confederations. – www.fifa.com